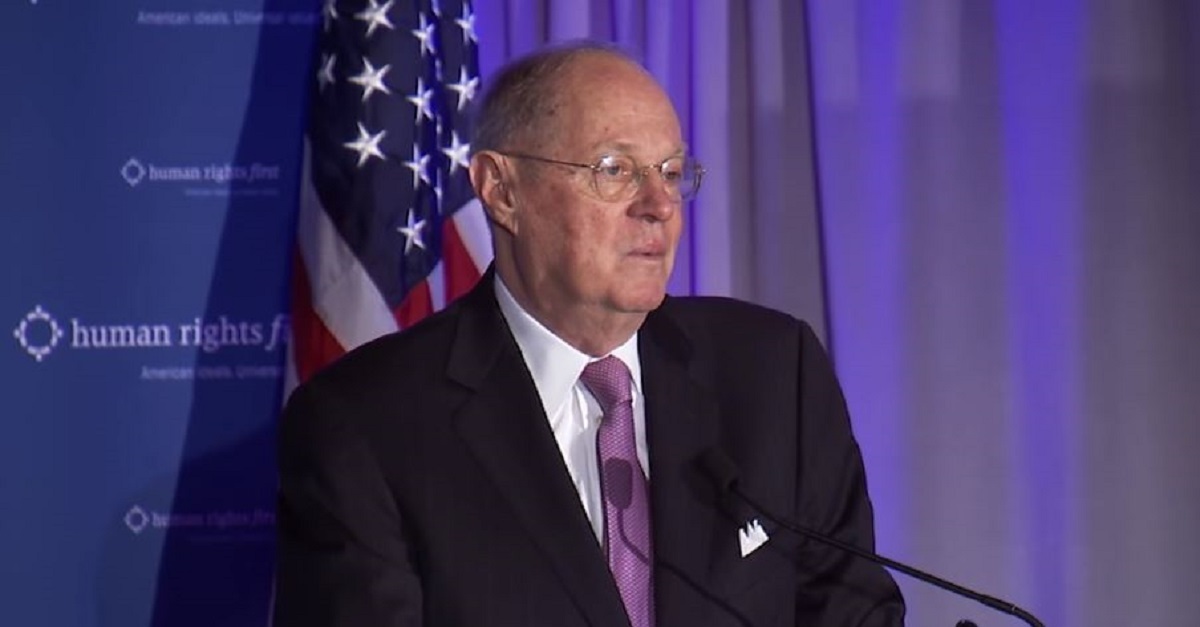 People thought that replacing Antonin Scalia with Neil Gorsuch was a disappointment for left-leaning court-watchers – but in truth, it wasn’t really that big of a deal. For all of Scalia’s entertaining writing style and jovial friendship with RBG, he wasn’t throwing any curveballs. Scalia voted on the conservative side of just about every issue that could be said to have one, and that was that. Replacing Scalia with Gorsuch should have been the judicial “meh” heard around the world.

The replacement of Anthony Kennedy, however, is a very different thing. Kennedy–up until his retirement, which was announced Wednesday afternoon–was SCOTUS’ “swing vote.” He was usually the guy who served as a tiebreaker when Kagan, Sotomayor, Ginsburg, and Breyer predictably stacked their votes against Alito, Thomas, Roberts, and Gorsuch. And although Kennedy had aligned with the conservative wing of the Court in many cases, his vote on cases involving individual rights was the one that made all the difference in many important cases.

Individual rights cases are special; they are the ones everyone talks about. These are the legal battles that play out in the headlines and are the fodder for movie scripts. These are the legal issues on which politicians promise and for which Americans vote. Americans will rally around gay rights, gun rights, abortion rights, religious freedom, and the death penalty in a way they will not around the Chevron doctrine, the commerce clause, trademark laws, or criminal procedure. That disproportionate interest in individual rights cases creates the perfect opportunity/obligation for President Trump to carry out his campaign promises. A Kennedy-sized vacancy on the Court means just one thing: a Trump nominee certain to vote with the conservatives on individual rights issues.

What will a conservative replacement for Kennedy mean?

Things are going to get even easier for gun owners. Anthony Kennedy himself was no enemy to the gun lobby. He joined the conservative majority in 2008’s District of Columbia v. Heller—the landmark case that established the right to possess a firearm in the home as a core Second Amendment guarantee. But for Kennedy, there were also limits. Kennedy sided with the court’s liberals in Abramski v. U.S. to stop “straw purchases” of firearms. It was precisely that moderate-ness that made Kennedy valuable to both wings of the Court. If there’s anything to know about the Trump administration, it’s that moderation is not a prized virtue; Kennedy’s successor is far more likely to vote “yay” on all things gun, and “nay” on all things federal regulation.

This is a biggie. The case of Gavin Grimm – the transgender boy who argued that denial of his right to use the boys’ bathroom in school was a violation of Title IX– made it up to the Supreme Court in October 2016. Once Trump was voted in, though, things changed, and the legal basis for Grimm’s lawsuit was affected. In March 2017, SCOTUS reversed its decision to hear the case. Another case involving transgender rights is bound to make its way up to the high bench soon – and there’s a good chance that Justice Kennedy would have had an important voice in its decision. Anthony Kennedy has been hailed as the gay-rights champion of the Supreme Court; he has authored every important decision for the LGBT community since 1996. From Romer v. Evans in 2003, in which Kennedy ruled in favor of an anti-discrimination law, to Lawrence v. Texas in 2007, in which he ruled to strike down a criminal sodomy law, to the 2013 United States v. Windsor, striking down the Defense of Marriage Act, and most recently, to the 2015 Obergefell v. Hodges, in which the Court declared  the right to marry as a fundamental right guaranteed to same-sex couples.

What will it not mean?

Overturning Roe v. Wade and A Ban on Abortion:

Although gaggles of the uninformed think Roe said, “all abortions are legal, all the time,” that’s not remotely what the case actually did. In real life, Roe set out Constitutional limitations for how state law may legislate about abortion. Later case law further refined Roe’s rules; bottom line, states are not permitted to completely outlaw abortion, but they are permitted to regulate the hell out of it.  Despite that permission, many states have reasonable and moderate abortion laws, and they’re not in the business of even trying to make those laws stricter. Nothing about abortion in those states is going to change no matter who Anthony Kennedy’s replacement may be.

When a strict abortion regulation case does reach the justices, a conservative bench could rule that restrictive regulations do not violate existing law, and that the state in question has the right to make abortions extremely difficult to obtain. There’s no question that such a decision would be a loss for champions of reproductive freedom, but it’s important to remember that these issues are not simply decided based on justices’ personal feelings. There’s a little (read, giant) obstacle called stare decisis. Justices are bound by precedent, and overturning past Supreme Court holdings is kind of a big deal. Recent cases involving abortion regulations have struck down those regs for putting an undue burden on women’s rights, and it’s unlikely that the Court will simply do an about-face.

An Un-Doing of Gay Marriage:

Gay marriage is a thing. We’ve all adjusted to the new normal, and things aren’t likely to go backward. As Neil Gorsuch said during his confirmation hearing, it’s a dead issue. When questioned, Gorsuch explained, “the Supreme Court of the United States has held that single-sex marriage is protected by the Constitution.” That’s judge-code for “if this comes across my desk, I’m going to say that it’s been settled already, and I’m not going to make any waves.”

A Harder Stance on Keeping Left-leaning Local Governments in Check

This is mainly because Kennedy was already pretty strict when it came to this in recent cases. Some the harshest language used against a government pushing a leftist agenda came in Kennedy’s concurring opinion in NIFLA V. Becerra, where he called out the State of California for claiming to be “forward thinking,” while being anything but by trying to force religiously-affiliated into posting information that goes against their beliefs. This wasn’t a knock on leftist ideologies themselves, rather it was a defense of individual rights, which in that sense should be no surprise.