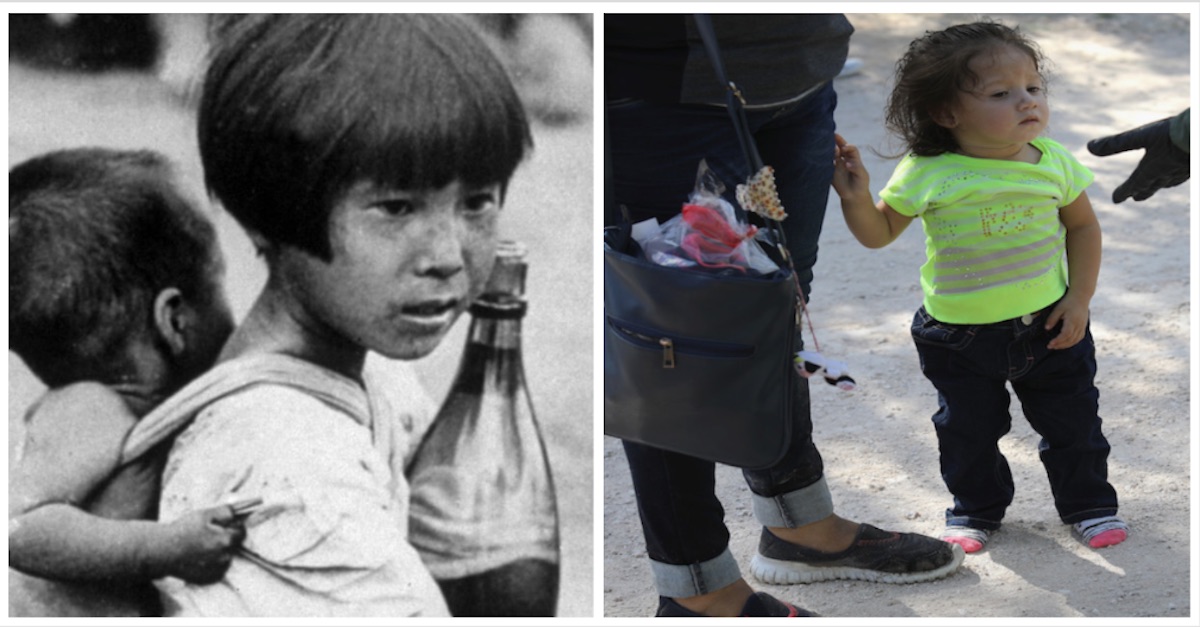 Looks like “Making America Great Again”  is even more retro than we thought, and really not in a good way. In a feat of repeating the worst parts of American history, the Trump Administration has decided to use Fort Sill – an Oklahoma Army base that was once used as an internment camp for Japanese-Americans during World War II – to hold 1,400 immigrant children.

For some context: Thus far in 2019, Health and Human Services has taken about 40,900 children into custody. That number is up 57 percent from last year and is on target to exceed 2016’s record of 59,171. These children are being held inside various facilities while awaiting placement with an appropriate adult, and are supervised by HHS employees.

Fort Sill, a military base in Lawton, Oklahoma, was built in 1849, and spans about 94,000 acres. It was also one of several internment camps used during World War II to hold 700 of 100,000 Japanese-Americans against their will. Later, Fort Sill was used to hold German war prisoners.

While “internment camp in Oklahoma” may sound like a kinder, gentler version of European concentration camps, conditions for those at Fort Sill during wartime was anything but humane. American citizens were rounded up, removed from their homes and families, and held as prisoners at Fort Sill. Armed guards used lethal force to prevent the innocent victims of hysterical Japanophobia from escaping.

American internment of Japanese-Americans has retroactively been perceived as a shameful stain on U.S. history, and, in particular, on American law. In the 1994 decision Korematsu v. U.S., the United States Supreme Court declared the executive order for internment legal, on grounds that the threat of wartime espionage justified such potent race-based discrimination. Since then, the Korematsu decision has stood as a monument to horrific jurisprudence, sharing its sickening spotlight with the likes of Dred Scott and Plessy v. Ferguson. The Korematsu decision was specifically disavowed in the 2018 case of Trump v. Hawaii, although many argued that SCOTUS had not gone nearly far enough. In her dissent, Justice Sonia Sotomayor wrote that the court’s majority “redeploy[ed] the same dangerous logic underlying Korematsu and merely replace[d] one ‘gravely wrong’ decision with another.”

Of course, Fort Sill isn’t currently being used to hold American citizens singled out for their heritage. The federal government does have wide latitude over matters of immigration, and Fort Sill is a large facility that is equipped to house groups of people needing shelter. Still, the similarities are striking and alarming. And at least some folks with personal knowledge of the circumstances of both usages of Fort Sill have declared its 2019 use to be even worse than that during World War II.

One of the sources for my book—who spent his childhood in a Japanese concentration camp in Wyoming—regularly visits family detention centers. I asked him once how the two compared.

“Brad,” he said. “It’s worse than anything we ever experienced.” https://t.co/GXZ9HU4FM1

The federal government’s decision to use Fort Sill to house these children is almost certainly legal. But legality makes neither Japanese-American internment, nor 2019 detention a good idea.

We will look back at this moment in time and ask ourselves what we did to put a stop to these horrific, inhumane policies. Speak up. Speak out. Be on the right side of history. https://t.co/cnm4ME5IVw

Well. At least now no one can pretend history isn’t repeating.  https://t.co/HHf5ctiT4G