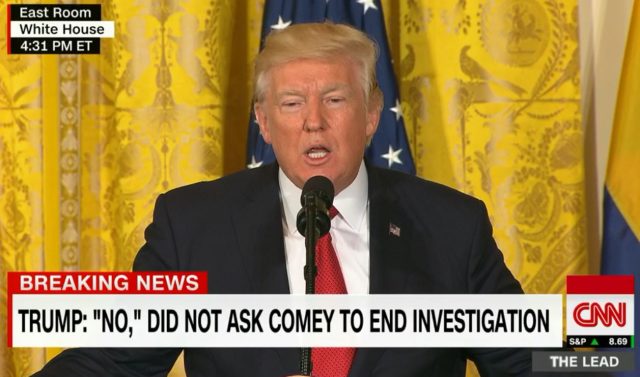 Employers large and small know the rules about firing someone: you don’t badmouth your employees on their way out the door. That’s pretty much Employment Law 101; when an employer says something bad about a former employee, there is always the risk of a lawsuit. No one needs that headache, so most employers just zip it after someone is ousted. But as we’ve seen time and time again, the Trump administration is anything but typical or careful.

In a standard can’t-keep-their-mouths-shut maneuver, Trump and his people threw blame wherever they could. First, 45 specifically called out James Comey for mishandling Emailgate (a potentially valid point, but more likely to be a reason for Trump to want to promote Comey, not fire him). Then, Sarah Huckabee Sanders, subbing in for White House Press Secretary Sean Spicer, held a presser in which she accused Comey of having “lost the support of the rank and file.” Then a week later, Trump backed up Sanders’ comment, saying that the former FBI Director was “very unpopular with most people.”

Here’s the thing, though. All evidence seems to show that Comey hadn’t lost the support of the rank and file. Not even a little.  POLITICO reported a statement by Thomas O’Connor, a counterterrorism FBI special agent who just happens to be the president of the FBI Agents Association. Guess what he said?

“[Comey’s] support within the rank and file of the FBI is overwhelming,” and his firing “was described to me today by at least three agents as a gut punch to the organization.” O’Connor went on to characterize Comey’s firing as a total surprise and that not only blindsided the FBI, but was also widely thought to be undeserved by Comey. Know who else said Comey was well-liked by the FBI? The new acting director, Andrew McCabe. “Director Comey enjoyed broad support within the FBI and still does to this day,” McCabe said at a Senate Intelligence Committee hearing.

I guess there’s a defense to raise that McCabe and O’Connor don’t really speak for the rank and file FBI – but that seems like kind of a stretch. If not those two, then who exactly would be better to speak for the group?  LawNewz.com spoke today with Misty Marris, partner and litigation attorney with Gordon Rees,who agreed:

“With any defamation case, whether brought by a public figure or not, the defense will argue that the statement made is substantially true.  This case poses a tricky sticking point, because to rebut the substantial truth argument, at issue would be the subjective opinion of hundreds or thousands of ‘rank and file’ agents. It’s unlikely that all those people would be individually interviewed about their opinion of Former Director Comey. Therefore, a plaintiff’s lawyer would have a pretty solid argument that the president of the FBI Agents’ Association and the Acting Director are in a position to speak about the agency’s collective opinion on Comey’s performance.”

Ok, so let’s recap. Sarah Huckabee Sanders made a statement that was based in total BS, and was proven wrong by the very people who are in the best position to know. If those untrue statements were to cause James Comey some financial damage, that sounds a lot like “defamation” to me. Even if Comey were deemed a “public figure,” thus raising the bar on defamation to require “actual malice,” there’s a good chance he’d be able to prove that too.

The need for a defamation plaintiff to prove financial harm works as a filter, isolating just those lies that cause a victim real, quantifiable damages. In many cases, particularly with high-profile individuals, it’s tough to prove that a negative statement truly hit them in the pocketbook; there are, after all, many times when there really is no such thing as “bad press.” But there’s one category of false speech that is almost always actionable: lies that someone has done his or her job badly. Every law student learns in torts class that an employment-based lie is the gold standard for a defamation claim. James Comey is 57 years old. It’s safe to say he’s not going to retire just yet. He’ll need to get future employment, and that’ll certainly be harder now that his resume is accompanied by an official White House statement saying he did a lousy job in his last post.

“For employers, the mantra is always, ‘if anyone asks about a former employee, you really just give the basics – name, rank, and dates of employment. If you do more than that, that’s just not smart. To be out there openly disparaging someone is very unusual.”

If Comey were characterized as a “public figure” for purposes of defamation – a likely, although not certain outcome – he’d also need to prove that Sarah Huckabee Sanders made the false statement with “actual malice.” That means she either knew the statement was false, or made the statement with reckless disregard for its veracity. Given that Acting Director McCabe and Agent O’Connor would likely have been the two easiest places for Sanders to verify the information, I think it’s safe to say that we’re good on the whole “actual malice” thing.

There is one glitch for a would-be plaintiff Comey here, though.  In 1982, the Supreme Court held that presidents are not liable for damages in civil lawsuits if the litigation concerns their official acts as president. Although that case dealt with federal court, and related specifically to POTUS as a defendant, it’s likely that the rule would extend to state courts and a press secretary.  Conveniently for Trump and his staff, they would very likely get blanket immunity for defamatory acts, as long as those acts were done in the official presidential capacity.   If you’re thinking that it’s a little weird to make the most powerful people in the world immune from repercussions when they defame ordinary individuals, you’re not alone.

Fun as this exercise is, even absent immunity, we know James Comey would be unlikely to sue Trump, Sanders, or anyone else in the administration. His departure letter made it clear that he’d go quietly and without incident, in an effort to preserve public confidence in the FBI – a show of integrity that was probably the very reason why he was so well-liked as Director. So while this won’t likely end up in a courtroom, we may want to remember it the next time Trump cries “slander!” – as has been one of his favorite pastimes.