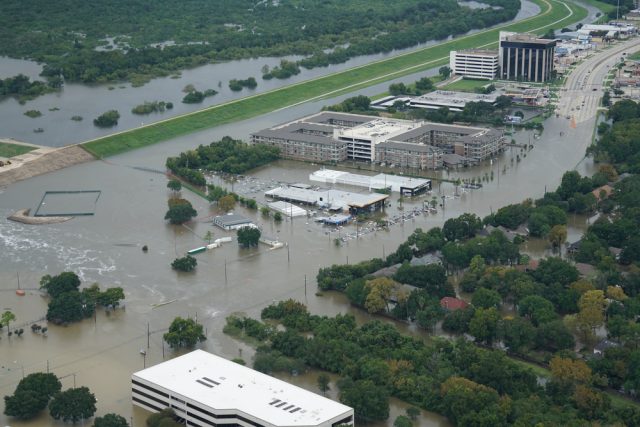 Hurricane Harvey relief funds are being directed to an organization notorious for wasting donations on PR and misallocating funds for political purposes. This none-too-curious turn of events implicates both (1) the standard bearer of the extreme alt-right, Breitbart; and (2) the poster child for the mushy middle of consistently ineffective alt-centrism, Barack Obama.

On August 27, the former president tweeted:

Thank you to all the first responders and people helping each other out. That’s what we do as Americans. Here’s one way you can help now. https://t.co/iGfE8rAoAu

Currently, visitors to Breitbart.com will find an advertising banner shrink-wrapped around the site’s homepage which reads: “You Can Help Texas Donate Now” set against an image of a man and child braving floodwaters. Users who click on the banner are redirected to the Red Cross.

One problem. The Red Cross is one of the worst places to donate funds under any circumstances, in my opinion.

Not only have local relief networks–and individuals–who are actually dealing with the crisis vociferously come out against donating to the Red Cross, they’ve even been criticized by a local official in the know. Harris County Judge Ed Emmett said:

“I don’t want to throw anybody under the bus but the Red Cross, they couldn’t get anything done.”

None of this should come as a surprise to discerning observers, however, the Red Cross is a household name and many Americans are quick to part with their paychecks during these flash points of extreme need. Conducting the necessary non-profit due diligence is, unfortunately, too much of a task for most overworked Americans–and the Red Cross has a very effective PR and digital outreach team. If you conduct a simple Google search for “Hurricane Harvey” one of the first results to appear is a “Yes, Donate” button which seamlessly transfers your contributions to the American Red Cross.

So, let’s take a walk down the poorly-paved roads of former Red Cross relief efforts and recent organizational history.

When Hurricanes Sandy and Ike battered the United States in 2012, the Red Cross received hundred of millions of dollars in donations intended for disaster relief. Much of that promised relief never really materialized and the rest of it was more or less wasted. Where those hundreds of millions went is anybody’s guess–and so far the Red Cross has refused to tell anyone outside of the organization.

A great deal of the donations were spent on relief supplies that were “politically driven,” and officials in Washington, D.C. were accused of “diverting assets for public relations purposes,” according to an internal audit.

After Haiti was all but completely leveled by an earthquake in 2010, the Red Cross was there–in theory. The organization ultimately raised nearly half a billion dollars off of Haiti-centered appeals. The non-profit then publicly boasted of its efforts, saying they had helped 4.5 million Haitians. That was a lie. The Red Cross came up with this number after over-counting so egregious that they apparently invented people far in excess of the amount who even lived in certain areas. Then they apparently lied about overhead, too–claiming to have spent 91 cents on the dollar for disaster relief when an investigation by ProPublica showed it was actually only 60 cents per dollar raised.

The Red Cross’ massive haul in Haiti was buoyed by highly-publicized promises to build “brand-new communities.” They claim to have provided homes for roughly 130,000 people. And, to be fair, the Red Cross did build more houses than most people will build in their entire lives: Exactly six houses–with half a billion dollars.

The Red Cross occupies unique terrain in the U.S. world of charities, non-profits and tax-exempt entities.

The Red Cross also blew funds in Louisiana–incurring the wrath of multiple local officials. Not to be outdone, they followed up by wasting money in Mississippi. A pattern should be sensed here. And, it has been sensed–by Red Cross’ own employees; only 39 percent trust the organization’s leadership.

The U.S. government has sensed the pattern too. An investigation into the Red Cross by the General Accountability Office was opened in 2014. The Red Cross prides itself on its openness, so of course they secretly tried to kill that investigation and got caught. Then the Senate noticed and conducted an investigation of their own. A report released by Senator Chuck Grassley (R-Iowa), blasted the Red Cross for fund misallocation, misleading congress and for their refusal to be honest about where donations are spent.

For an easy dose of perspective, consider the annual salary of Red Cross CEO Gail McGovern: $500,000 plus expenses.

The Red Cross occupies unique terrain in the U.S. world of charities, non-profits and tax-exempt entities. They’re basically a chimera-like organization completely unto themselves with the name recognition and stature that most non-profits could only dream of. Too bad it’s mostly unearned.

Parallels can be seen to the Red Cross’ insistence that third party investigations don’t succeed to make the organization more transparent, accountable and simply better at delivering aid.

So, please, for the sake of Houston, southeastern Texas and southwestern Louisiana–do not donate to the Red Cross. If you must waste and launder money in order to make yourself feel better, try the Democratic Party.