On This Week’s ‘Objections’ Podcast: Meet the Environmental Lawyer ‘Begging’ the Justice Department to Prosecute Him 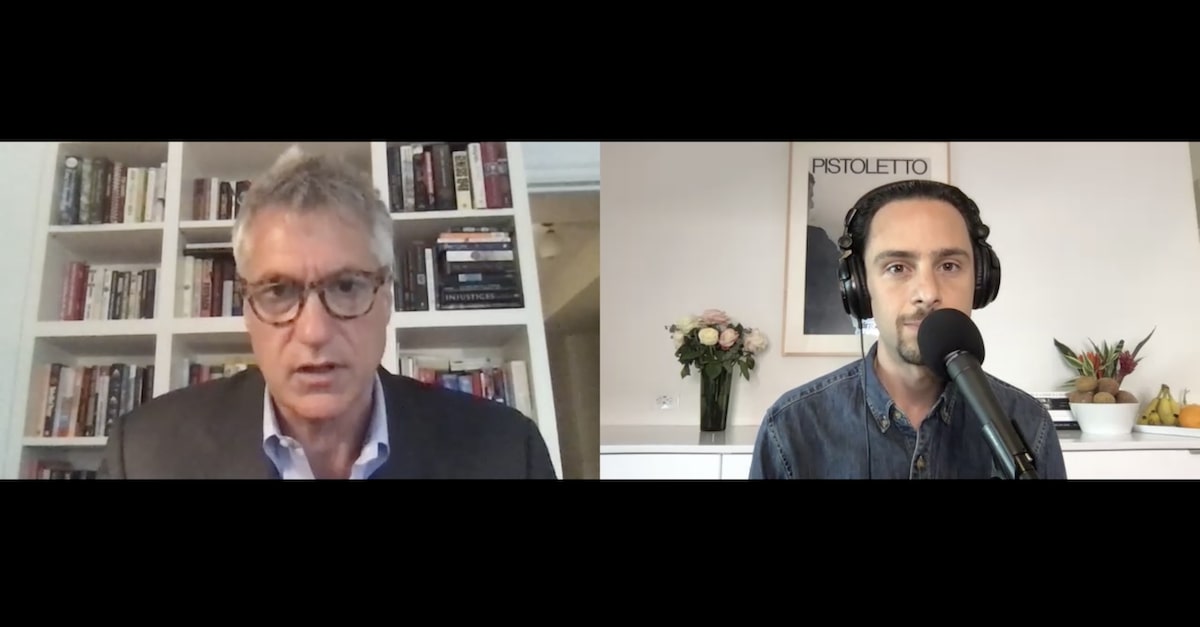 Environmental advocate Steven Donziger talks about his unusual judge-ordered prosecution via Zoom on the latest episode of Law&Crime’s podcast “Objections: With Adam Klasfeld.”

Over the course of 28 years in courts across the world, litigation over drilling by Chevron’s predecessor Texaco in the Ecuadorean rainforest has taken countless surprising turns, but perhaps none so unusual as the ongoing criminal trial of their archnemisis: environmental lawyer Steven Donziger.

“We kind of laugh about this on our legal team, but I’m probably the only lawyer in America ever to really be begging to be prosecuted by the DOJ criminally,” Donziger quipped during a Zoom interview taped days before his criminal trial in Manhattan Federal Court.

On the latest episode of the Law&Crime podcast “Objections: with Adam Klasfeld,” Donziger and one of his most high-profile supporters, Rep. Jim McGovern (D-Mass.), explain why they are both asking for the Department of Justice’s intervention in the criminal case.

Since August 2019, Donziger has been the subject of a rare, judge-ordered prosecution. The U.S. Attorney’s office declined to pursue Donziger’s case, but U.S. District Judge Lewis Kaplan charged Donziger himself for contempt of court.

The current charges stem from Donziger’s refusal to turn over electronic devices to Chevron, which has been locked in a $9.5 billion battle over an environmental lawsuit that Chevron calls fraudulent. Donziger, whom the judge claims also flouted other court orders, argues that compliance would violate his attorney-client privilege and obligations to his Ecuadorean clients.

Now disbarred, facing enormous legal bills and wearing an ankle bracelet under house arrest, Donziger claims to be the target of an elaborate retaliation campaign.

“I am probably the target of the most well-financed corporate attack campaign and through the law in our country’s history,” Donziger alleges on the podcast. “I mean, what’s happening to me makes what happened to Ralph Nader, with the GM scandal seem like very small potatoes.”

Speaking about his then-upcoming trial from his home in New York’s Upper West Side—where he has spent more than 600 days under house arrest—Donziger details the litigation’s circuitous history and explains why he wants the Justice Department to intervene in a case currently being prosecuted by private lawyers from Seward & Kissel, a firm that counted Chevron as a former client.

“I’ve been here now for 638 days, and it’s a misdemeanor case, meaning the maximum sentence is 180 days in prison,” Donziger noted, adding his lawyers could not find a contempt case with such a lengthy period of house arrest.

Calling his prosecution “onerous,” “punitive,” and “highly irregular,” Donziger asserted: “I don’t think it would be happening if I were to be prosecuted by the DOJ. I think it’s happening because this is Chevron’s plan to wrest control of the prosecutorial machinery of the people and directed against its main critic.”

Half a dozen U.S. lawmakers, 68 Nobel Prize winners, Amnesty International and some international bar associations have taken up Donziger’s cause.

Rep. McGovern, the chair of the Rules Committee and co-chair of the Tom Lantos Human Rights Commission, talks to Law&Crime about why he and five other lawmakers have requested a review of Donziger’s case by U.S. Attorney General Merrick Garland.

“I’m not a lawyer, and I don’t pretend to be a lawyer,” McGovern noted. “But by any measure, his being under house arrest for a seemingly endless period, and the way the judges handled this case just seems just odd—so out of the ordinary that many of us decided to write to the Attorney General.”

“He’s not just a lawyer,” McGovern noted, referring to Raskin. “He’s a constitutional law professor… and he and the others who signed the letter are all appalled by this.”

Understanding how the course of Chevron’s litigation in Ecuador led to this pass takes some historical unpacking.

In 1993, a class action lawsuit was filed on behalf of tens of thousands of indigenous and campesino residents of the Ecuadorean Amazon, alleging that Chevron’s predecessor Texaco left their once-pristine rainforest lands an oil-strewn mess.

A few years later, Texaco entered into a settlement agreement with a then-industry friendly Ecuadorean government to clean up a portion of the contamination sites. The Ecuadoreans suing Chevron called the remediation a sham.

Congressman McGovern, who knew Donziger from when they were both students at American University, recounted witnessing the oil pits in the region himself, when he visited the area in 2008.

“I smelled the oil everywhere I went, in people’s wells, the water they were giving their animal their animals to drink,” the congressman added. “I saw people with unusual rashes on their bodies, but what was painful for me was the realization that this is a US company that did this.”

Though Chevron does not deny that the oil pits exist, the company disputes some of the effects and asserts that the Ecuadorean government is responsible for it under their agreement.

Donziger calls that a “classic polluter’s defense,” one that he notes Ecuadorean courts rejected.

After Chevron and Texaco merged in 2001, Chevron persuaded a federal judge to move the case to Ecuador, which ultimately reached a judgment against the company for billions of dollars. Chevron attacked that judgment weeks in advance of that verdict back in New York a little more than a decade later, suing Donziger and his team under federal anti-racketeering law, a statute used to combat organized crime.

Judge Kaplan ruled broadly in Chevron’s favor, forbidding Donziger from collecting the judgement and finding he obtained the verdict by “corrupt means” such as bribery, ghostwriting scientific expert reports, and other misconduct. Kaplan’s findings were upheld on appeal in U.S. courts, blocking Donziger from profiting from the Ecuadorean verdict, which that country’s courts also affirmed.

Donziger maintains his innocence and notes that Chevron’s main witness for the corruption claim is an Ecuadorean judge named Alberto Guerra, whom the oil company compensated lavishly and relocated to the United States in return for his cooperation.

When asked about the U.S. court’s findings against Donziger, Congressman McGovern replied that they were inconsistent with the man he knew from college.

“For as long as I have known Steven Donziger, he has cared deeply about issues of social justice and fairness,” McGovern said. “He’s always even in college was a voice for the voiceless. I mean, that’s who he was for as long as I had known him.”

Casting the turn of events as blowback from Chevron, McGovern said: “I wasn’t surprised, because this is what big corporations do.”

Though it was a civil case, Kaplan described Donziger’s conduct as criminal, but the U.S. Attorney’s office declined repeated invitations to prosecute him. The Wall Street Journal recently reported that Chevron’s longtime law firm Gibson Dunn unsuccessfully lobbied prosecutors to open a racketeering case in 2010.

Donziger’s contempt trial remains ongoing, but he says that the Justice Department can intervene at any time, even after the trial.

McGovern said that he and the other lawmakers will be paying attention.

“There is a growing number in Congress that are now refocusing on this issue, and we are not going away,” he said.