Steven Donziger, After Winning $9B Judgment Against Chevron, Has Been Under House Arrest for 500 Days Awaiting a Misdemeanor Trial 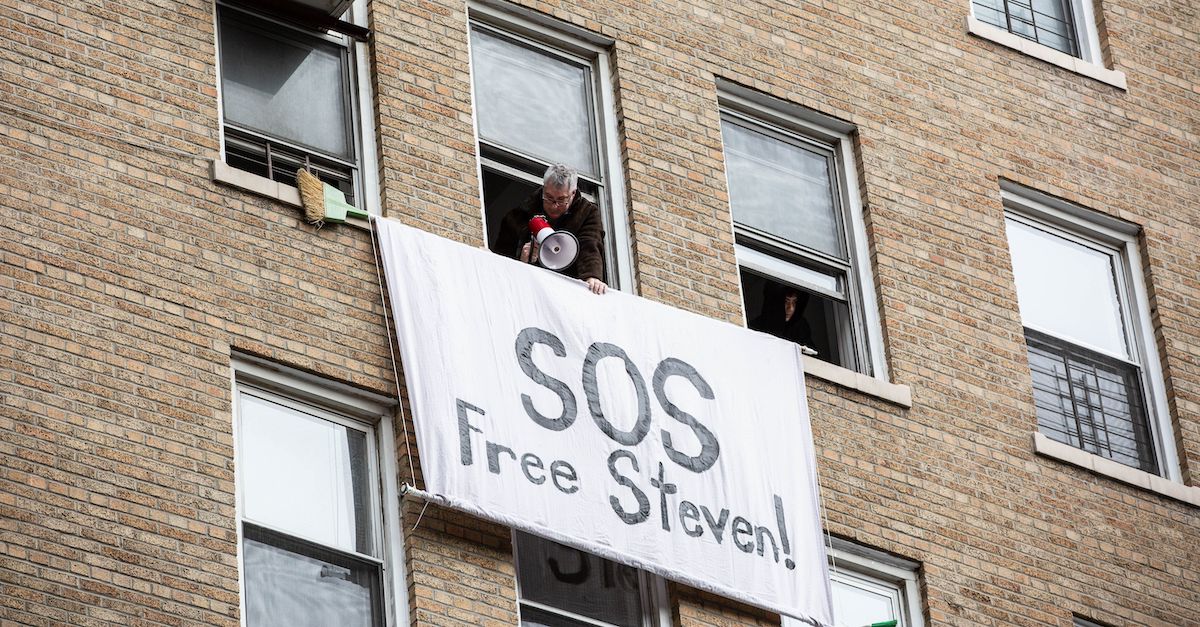 On his 500th day of house arrest, Steven Donziger addresses his supporters through a window of his Upper West Side apartment.

During his early adulthood, Steven Donziger started off his career as a correspondent covering war and politics in El Salvador, Costa Rica, Mexico and Nicaragua. He later went on to defeat Chevron to the tune of more than $9 billion in an Ecuadorean court, in a battle over oil pollution to the Amazon jungle that defined his career.

Now disbarred, criminally prosecuted and vilified by an oil giant, Donziger marked his 500th day under house arrest in a scene straight of out of a Latin American history book: with an address to supporters from a window instead of a balcony.

“I cannot believe that I have to talk from seven floors up,” Donziger bellowed through a bullhorn on Friday, to supporters and assembled celebrities like Pink Floyd’s Roger Waters, New York politician Maria Ordonez, and his star defense attorney Ron Kuby.

Accusing Donziger of obtaining the Ecuadorian judgment through fraud, Chevron countersued in New York and won, in a ruling upheld on appeal. Ecuadorean courts, for their part, upheld the multi-billion judgment against Chevron.

Donziger, who counts some 55 Nobel laureates and several international law groups among his supporters, maintains his innocence of these allegations and calls himself the target of an enormous corporate retaliation campaign.

“What’s happening to me is a sign of our success,” Donziger told his supporters during his address.

As with so much in the Donziger affair, not everything is how it appears on the surface.

After his speech was done, Donziger walked down to the street to join and pose for photographs with his supporters—a small allowance of a pre-trial release that otherwise obligated him to shelter in place far longer than the coronavirus pandemic. The image of the Spanish-speaking firebrand shouting high from his perch, however, spoke to an undeniable truth: Donziger has been largely grounded for more than a year while awaiting trial for misdemeanor offenses. 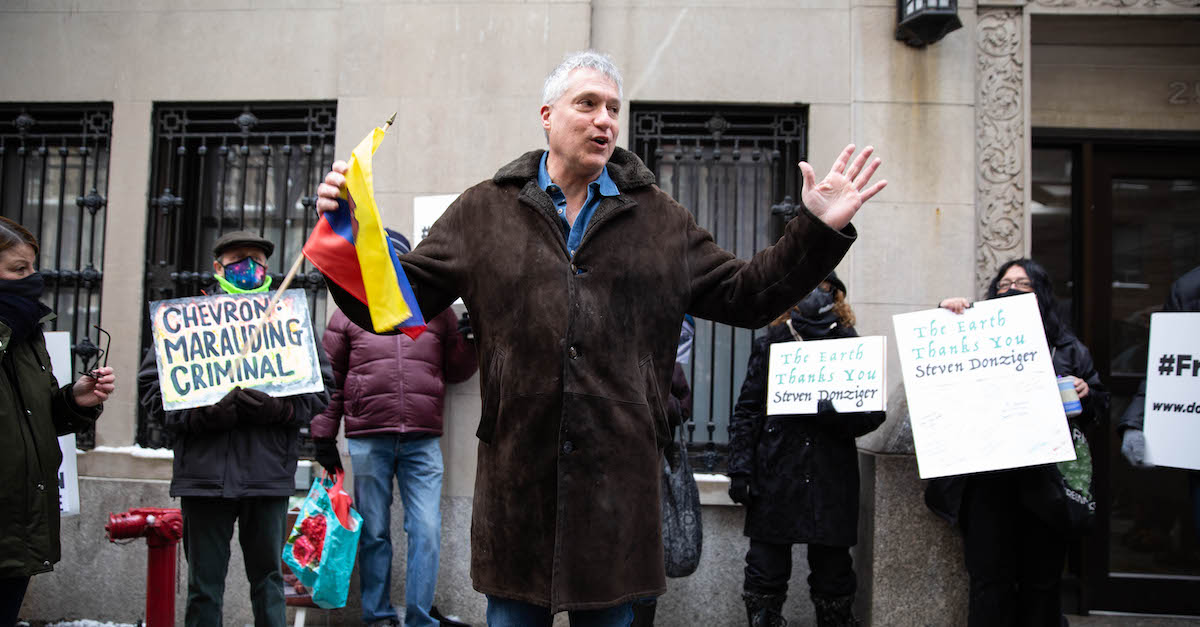 “There is no reason why Mr. Donziger should be treated differently from any other pretrial defendant,” U.S. District Judge Loretta Preska remarked this past June, after Donziger’s attorney asked permission for his client to roam the city several hours a day.

In his most recent motion to free Donziger, Kuby said he would hold Preska to her words.

“It appears that the Court had not been informed that, in the available history of the federal judiciary, no federal misdemeanor defendant without a prior criminal record has ever been held in pre-trial home confinement subject to electronic monitoring,” wrote Kuby, a former partner of legendary defense attorney William Kunstler who was name-dropped in the classic Coen brothers movie The Big Lebowski.

From its inception, Donziger’s case has been unusual.

Some seven years after his Ecuadorean clients first sued Texaco in New York in 1993, Chevron acquired that company and succeeded in getting the case transferred to Ecuador, a decision the oil giant regretted ever since. A judge in the rainforest city of Lago Agrio ultimately found Chevron liable for billions, and the San Ramon, California-based company initiated a scorched-earth counteroffensive on three continents.

Though Kaplan labeled Donziger’s conduct “criminal,” the Department of Justice never charged him with any offenses. Judge Kaplan referred the case to the Southern District of New York, and when prosecutors there refused to bring one, the judge drafted a charge sheet himself and handpicked a private law firm to act as prosecutors. This time, Kaplan did not allege fraud, bribery or money laundering, as he had in his civil opinion—only contempt of court charges related to post-trial discovery matters.

Once again, Donziger appears to be en route to being denied a jury because the private prosecutors have capped the punishment below what would trigger such a requirement under the Sixth Amendment.

“This Court has elected to treat the pending criminal charges, for punishment purposes, as a single ‘petty offense’ with a maximum sentence of six months in jail and a $5,000.00 fine,” Kuby noted.

Researching the Southern District of New York’s history, Kuby found that radical lawyers like Stanley Cohen and the late Lynne Stewart faced much lighter treatment for far more serious allegations. Both were free on bail pending trial for, in Stewart’s case, material support for terrorism and, in Cohen’s, wire fraud. Kuby did not stop here.

“In the Southern District of New York, among the better-known cases, Michael Cohen, long-time ‘fixer’ for Donald J. Trump, faced a raft of charges stemming from his criminal actions to subvert American democracy,” Kuby wrote, noting that Cohen was released on his own recognizance before his sentencing.

“Michael Avenatti, facing extortion charges, was released subject only to an unmonitored travel restriction to the Southern and Eastern Districts,” Kuby continued.

Donziger’s judge-ordered prosecution is itself extraordinarily rare. Kuby argued that there isn’t a risk that his client would flee to Ecuador.

“Fundamentally, to justify this confinement, this Court would have to find that there is a very real possibility that Mr. Donziger, at the age of 59, would abandon a 25-year residence in New York; abandon his wife, 14-year-old son, and extended family; abandon his extensive efforts to overturn his disbarment, which is currently pending in the New York State Court of Appeals; abandon his efforts to overturn civil contempt findings which is sub judice in the Second Circuit; commit at least a Class-D federal felony carrying five years imprisonment; and devote himself to life as a fugitive without the ability to travel outside of Ecuador, dependent always on the uneven vagaries of Ecuadorian political asylum-all to avoid what adds up to a maximum sentence of five months and three days in jail,” he added.

Even if Donziger had the incentive to flee, Kuby wondered about the logistics of such a caper.

“Of course, without a passport, it is hard to imagine Donziger being allowed to board an international flight, but whatever,” he wrote in a footnote.

Chevron’s spokesman Sean Comey reiterated the company’s successes fighting Donziger’s case in the United States, an investor tribunal in the Netherlands and elsewhere.

“Donziger’s troubles are entirely of his own making,” Comey told Law&Crime in an email. “His complaints about criminal prosecution are an attempt to distract attention away from the fact that the U.S. court system found that he and his accomplices obtained the Ecuadorian judgment against Chevron through fraud, bribery, and corruption.”

Donziger’s trial, now scheduled for Jan. 19, 2021, has been adjourned multiple times at his request, after his attorneys successfully argued that trying the case during a global pandemic would risk a host of constitutional violations, including his right to confront his accusers.

Update — Dec. 21, 9:15 a.m. ET: This story has been updated to include a comment from Chevron received after the story’s publication.