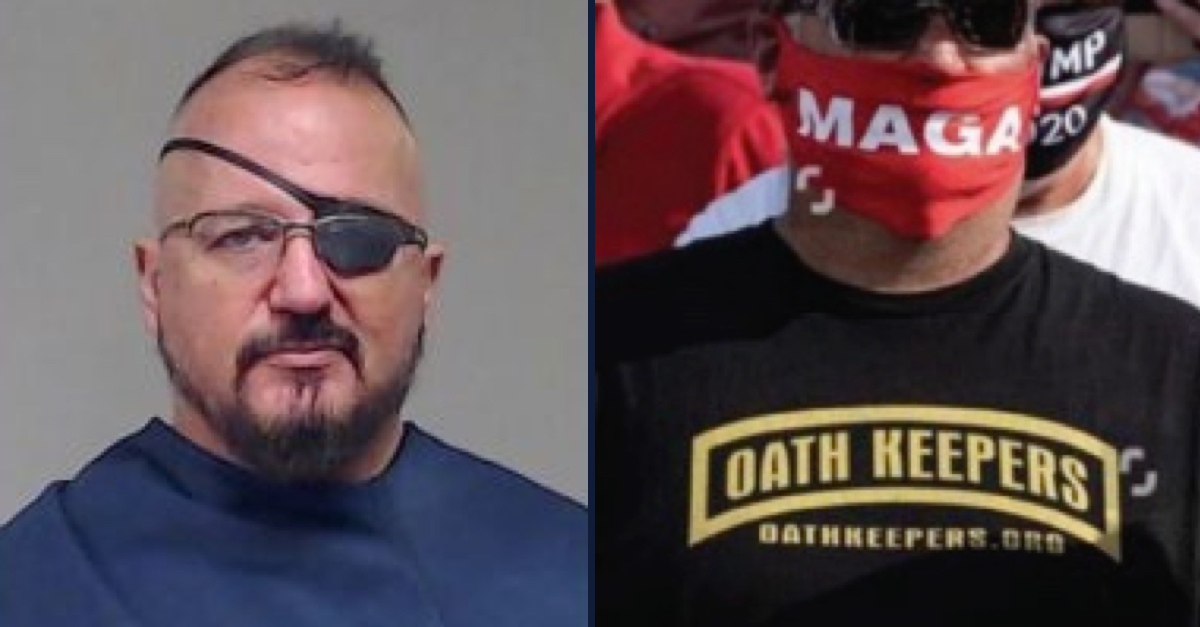 Left: Stewart Rhodes booking photo (via Collin County (Tex.) Jail). Right: Kelly Meggs is seen wearing a “MAGA” mask over his face and a shirt with the “Oath Keepers” logo in yellow (via FBI court filing).

The judge overseeing the seditious conspiracy case against members of the Oath Keepers extremist group accused in the Jan. 6 attack on the U.S. Capitol has denied a defense request to see text messages and emails of former co-defendants who made plea deals and have been cooperating with the government.

Stewart Rhodes, the leader of the Oath Keepers, and Kelly Meggs, the alleged leader of the group’s Florida chapter, had asked U.S. District Judge Amit Mehta to approve subpoenas for texts and emails of co-defendants, Joshua James and Brian Ulrich, both of whom have pleaded guilty to seditious conspiracy and obstruction of an official proceeding of Congress. Both James and Ulrich are cooperating with the government in its case.

According to Rhodes and Meggs, neither would have pleaded guilty to seditious conspiracy and obstruction of an official proceeding of Congress and cooperated with the government unless they were pressured to do so.

Rhodes’ attorney Edward Tarpley had filed a motion on Sept. 19 asking Mehta to approve subpoenas of James, Ulrich, and other Oath Keepers members who have also pleaded guilty to Jan. 6 offenses. Rhodes wanted to see text and email communications in the months before and after they entered their pleas, implying that the communications would show they were facing pressure to admit guilt.

“Stewart Rhodes knows these Oath Keepers,” Tarpley argued in the motion. “He knows that if they pled guilty, they knew the Oath Keepers engaged in no conspiracy, had no plan to commit any crime, and intended to act lawfully at all times. And Rhodes knows from knowing them that they must have told friends and family that they were in fact innocent but they had to plead guilty due to the crushing financial burden and other pressures such as incarceration and concern for the needs of their families.”

Meggs, through his attorney Stanley Woodward, filed his own motion joining Rhodes’ request on Wednesday. Unlike Rhodes’ motion, however, Meggs’ motion provided a specific example of what Woodward said was “good cause” to request the subpoenas: an online fundraiser by James’ wife.

An excerpt from that crowdfunding effort said:

As you have probably seen, we have made the difficult decision as a family to accept a plea agreement . . . We made the choice that makes it more likely that Josh would be home sooner than later instead of risking our future on a trial that would likely take away many years of his life and deprive him of the chance to raise his children. After a year of being in the thick of it and many lengthy talks with our attorneys, this plea best protects our hopes that we will remain a family.

“Mrs. James’s comments suggests that Mr. James’s acceptance of his plea agreement was motivated by reasons other than his desire to accept responsibility for the crimes with which he was charged,” Woodward argued in the motion.

Mehta, who denied the motion during a break from jury selection proceedings on Thursday, disagreed.

“Nothing in the statement suggests that Mr. James is backing away from taking responsibility,” Mehta said, adding that Woodward’s characterization of the statement was not accurate.

Rhodes and Meggs are accused of seditious conspiracy, obstruction of an official proceeding of Congress, destruction of government property, and other felonies in connection with the Jan. 6 siege,  Co-defendants Jessica Watkins, Kenneth Harrelson, Thomas Caldwell, and Oath Keepers founder Stewart Rhodes are five of 11 people accused of plotting to bring a cache of weapons to the Capitol in support of the effort to stop the transfer of power on Jan. 6, as hundreds of Donald Trump supporters stormed the Capitol in an apparent attempt to stop Congress from certifying Joe Biden‘s win in the 2020 presidential election.

Jury selection in the Rhodes trial ended Thursday, and opening statements are expected to being Monday.