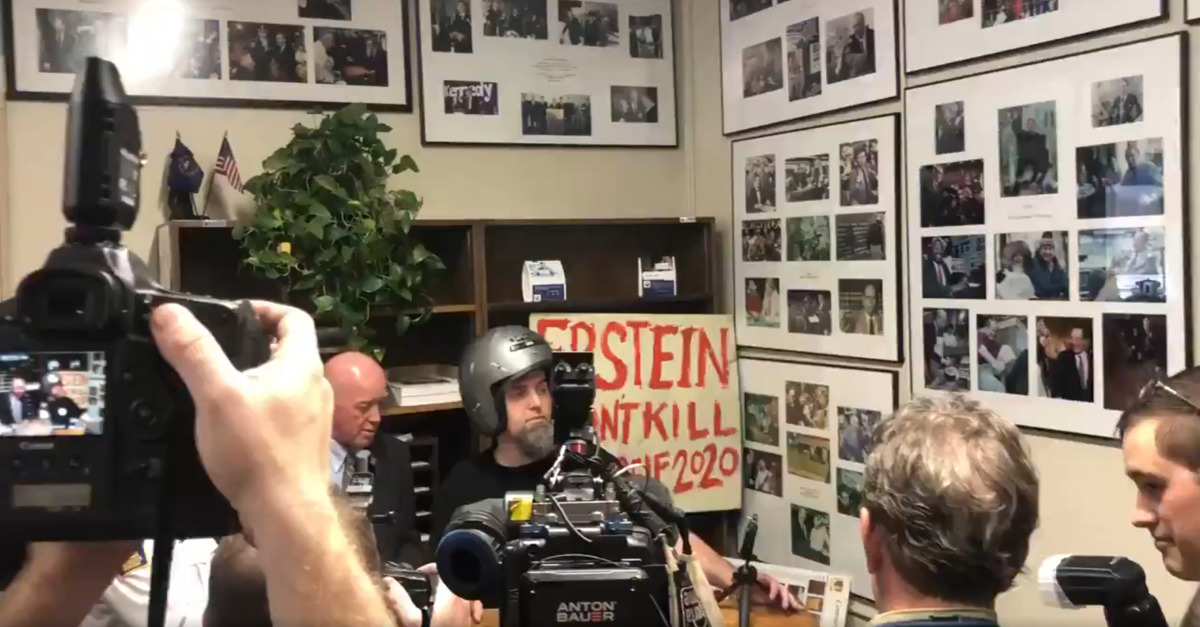 A man in New Hampshire attempted to register for the first-in-the-nation presidential primary on Friday using an interesting nickname: “Epstein Didn’t Kill Himself.”

Rod Webber is the man in question. His Twitter timeline suggests he’s something of an anarchist–though Webber insists he doesn’t identify with any political party and doesn’t “believe in isms.” He’s also a fairly well-known entity in New Hampshire primary politics due to his perennnial presence and undeniably outsized personality.

Webber is a pacifist, a vegetarian, a singer-songwriter, a neo-hippie and performance artist, who’s made a name for himself on the campaign trail of late as “the flower guy.” He sports a beard and a top hat while philosophizing over Biblical passages on war and fracking, and what makes a man well-suited for public office, always offering a peace offering of a flower in the end, to punctuate his point of view.

And he’s no stranger to hobnobbing with politicians themselves.

The Ink Link article notes that Webber “has held hands and prayed with Jeb Bush” and previously “prompted Chris Christie to publicly question his standing as a good Catholic for practicing birth control.”

But those politicians are yesterday’s news; those headlines tomorrow’s fish-and-chip paper. Candidates and issues have changed.

On Friday, Webber had a different goal: to register as a candidate for the 100th anniversary of New Hampshire’s first-in-the-nation status.

Bearing a medium-sized cardboard sign marked with red ink or paint, Webber made his bid for ballot placement amidst a phalanx of national and local reporters who were hoping to catch a glimpse of–and eventually garner soundbites from–more well-known Democratic Party candidates like former vice president Joe Biden and entrepreneur Andrew Yang as they paid their $1000 filing fees.

As press awaits @JoeBiden, this candidate is arguing with NH officials that he should be able to get on the ballot as “Epstein Didn’t Kill Himself Weber.” Then someone else walked in and asked the Epstein guy to move out of the way so he could file for the ballot. New Hampshire! pic.twitter.com/EouGWIIdAo

Webber said he ticked all the boxes necessary for inclusion on the ballot but his effort was frustrated by Granite State officials.

New Hampshire Secretary of State Bill Gardner, a Democrat, denied him the opportunity to register and told Webber to “come back.”

“Come back with what?” Webber insisted as cameras clicked and whirred in the small room–observers grousing and chatting away. “I’ve come with the requisite money; I’m over 35; I’ve lived in the United States my entire life. I can use a nickname.”

New Hampshire law allows nicknames on the ballot, but doesn’t allow use of a nickname that “that constitutes a slogan or otherwise associates the candidate with a cause or issue.”

“This is the second time in two election cycles that Gardner has turned me down,” Webber told Law&Crime. “In 2015, I tried to register as ‘Flowerman’ which was what the press had referred to me as in hundreds of articles. According to state law, this is allowed. Gardner has no problem with John Ellis [“Jeb“] Bush, Rafael [“Ted“] Cruz or Rocky De La Fuente. So, as long as I got people to refer to me as ‘Epstein Didn’t Kill Himself’ publicly, Gardner would have to allow it.”

“Basically, Gardner has decided he gets to choose who gets to run for president or not. In 2015, I was told if I didn’t like his decision, I could make a complaint to some committee which he happened to run.”

Webber was sanguine about his chosen nickname.

“It doesn’t add up,” he noted. “The U.S. government has a long history of covering up crimes of a legal and moral nature.”

The law on point here, reads, in relevant part:

Was Webber turned down because Gardner believed his nickname would have constituted a slogan or associated him with a cause or issue? If so, why was he told to “come back” instead of categorically denied? Those questions are currently unclear.

Law&Crime reached out to the New Hampshire Secretary of State’s Office for clarification on why, exactly, Webber was turned away but no response was forthcoming at the time of publication.

Forced to leave, and disallowed from getting on the NH primary— because SoS Bill Gardner decides gets to rule the universe! #Epsteindidntkillhimself https://t.co/Inx9yfm81j