Jason Van Dyke admitted he shot McDonald but said he did so because McDonald, from a distance of ten to fifteen feet, swung his right arm, which was holding a knife, toward Van Dyke. That’s when Van Dyke said he pulled the trigger.

“We never lost eye contact. His eyes were just bugging out,” Van Dyke said of the victim. McDonald’s face was “expressionless” despite having been chased by a fellow offer and after having been ordered by Van Dyke to drop the knife he was carrying.

McDonald moved his knife from waist level on his lower right side, across his chest, and toward his left shoulder, Van Dyke testified. Because McDonald raised the knife and moved it in Van Dyke’s direction, Van Dyke told jurors he believed he was going to be attacked.

After McDonald was on the ground, Van Dyke said he fired a second round of shots. “To me, it seemed like he was getting back up,” Van Dyke said, with regards to McDonald.

Van Dyke began his testimony by discussing his police career more broadly. He said that he patrolled dangerous areas and had drawn his weapon definitely more than ten, but possibly more than 20, times in the past.

After roll call, Van Dyke testified that he traveled to an area 7-Eleven store (at 59th and Pulaski) in a car driven by Officer Joseph Walsh. He heard a call of distress, he said. His duty was to work as a “rapid response car.”  He responded to the call but could not recall whether his lights and sirens were activated initially on his way to the convenience store.

On the way to the store, he heard another unit state that its tires had been slashed. At that point, Van Dyke recalled that the car he was travelling in had its lights and sirens activated.

Prosecutors noted during cross examination that recordings of police radio traffic indicated the tires had been “pop[ped]” rather than “slashed.” Van Dyke said he believed the phrase was different.

At the intersection of 40th and Pulaski, Van Dyke said Walsh, who was driving, made a left-hand turn to head west. He saw a man next to a car “feverishly pointing” to the west and south. He also saw another officer, Patrolman Joseph McElligott, pointing east while running toward the east. Officer McElligott had his gun in his hand. Van Dyke saw a black male, whom he eventually identified as McDonald, with a knife heading toward a Burger King. 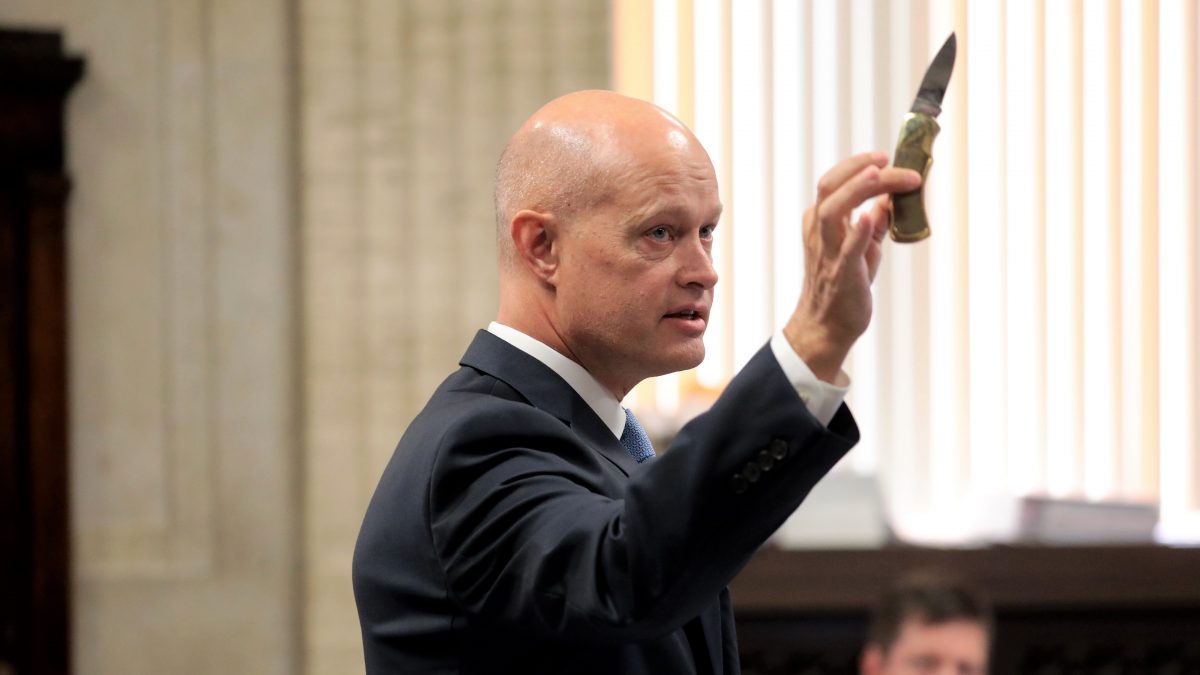 Van Dyke said the man with the knife continued to head east. He and Officer Walsh looked for an “opening” where they could “hop the curb” and continue to chase the man onto Pulaski. Then, Van Dyke lost track of the knife — he didn’t see it anymore.

“I started to open up my car door because I thought we were going to be able to knock him to the ground with the car door,” Van Dyke said. That was unsuccessful because of an oncoming car.

Van Dyke then said the man with the knife was Laquan McDonald. Van Dyke “lost sight” of McDonald for a few “moments” as he got out of his squad car and went around it. He saw McDonald extend his hand and display a knife. He testified he was trying to prevent McDonald from entering the nearby Dunkin’ Donuts location at that point. Walsh parked their squad car at an angle in front of the Dunkin’ Donuts. Van Dyke was looking at McDonald over his right shoulder.

Van Dyke said McDonald kept coming toward him. Van Dyke knew McDonald had a knife. He “lost focus” of Walsh, his partner. Van Dyke said he focused on McDonald. Van Dyke saw another squad car, an open field to his left, and McDonald “advancing” on him.

“His face had no expression, his eyes were just bugging out of his head; these huge, white eyes, just staring straight through me,” Van Dyke said of McDonald.

“I was yelling at him,  ‘drop the knife.’  That’s all I yelled.  He never stopped,” Van Dyke told jurors.

Van Dyke said McDonald was ten to fifteen feet away.

“We never lost eye contact. His eyes were just bugging out.” His face was “expressionless.” “He waived the knife . . . I shot him.” 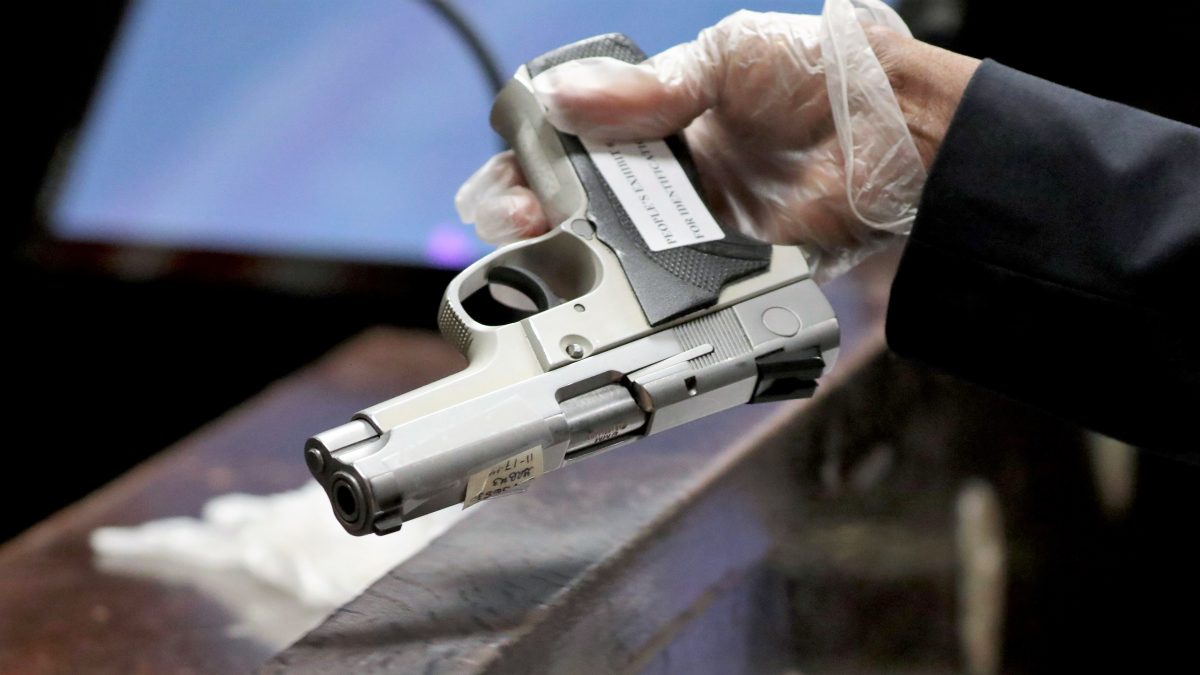 Van Dyke said he didn’t know if he hit McDonald through the first shots. He testified he didn’t notice. He also said he had no clue how many shots he fired.

Van Dyke slowed down through testimony here and began to show emotion and breathe heavily. His attorney asked him if he was alright.

“Eventually, he fell to the ground,” Van Dyke said of McDonald. He said McDonald never dropped the knife.

“Once I recognized that he was on the ground, I stopped shooting.”

“I could see him starting to push up with his left hand off the ground . . . I still see him holding the knife with his right hand . . . I just kept looking at the knife and shot at it.  I just wanted him to drop that knife . . . I wanted him to stay on the ground,” which was an “easier position for us to take him into custody,” Van Dyke told jurors.

After Van Dyke stopped firing, his partner, Walsh, said, “Jason, I got this.” Walsh disarmed McDonald, who by then was laying on the ground suffering from gunshot wounds. “He kicked that knife as hard as he could. It only went a couple of feet,” Van Dyke said of Walsh’s attempt to disarm McDonald.

From there, Van Dyke said he “screamed into the radio, ‘we need an ambulance!'” 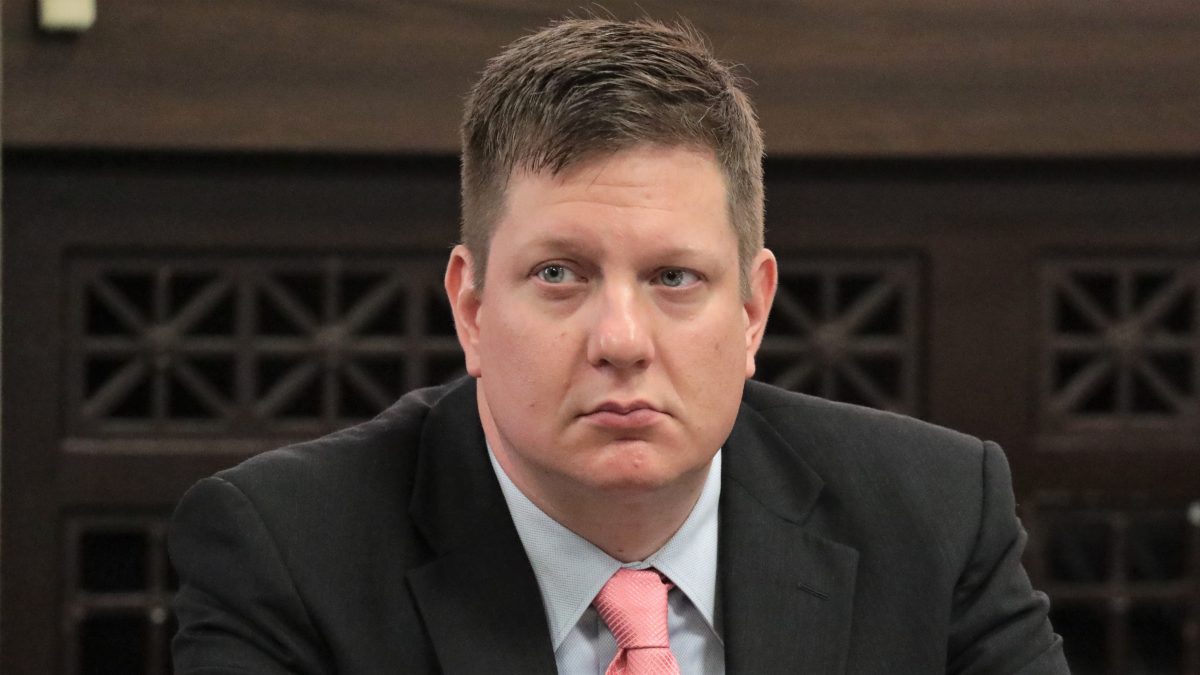 Van Dyke testified that he was in shock after the shooting and said that his shock accounted for differences between his testimony and statements he made to a detective not long after the shooting. He said he could not remember clearly what he told a doctor with whom he spoke several years ago when confronted on the witness stand with statements he made to the doctor.

Most critically, Van Dyke said the dash cam recording does not match his own perception of what occurred that night. He told the detective and the doctor that he “backpedaled”  during the shooting. The video confirms that Van Dyke was actually advancing toward McDonald before he fired.

Prosecutors sparred vehemently when Van Dyke over both dash cam video and a defense expert animation which purported to show Van Dyke’s perspective of the shooting.

Van Dyke said the dash cam recording of the shooting does not show everything because it was recorded from a different perspective. The recording shows McDonald from the back. Van Dyke was looking at McDonald from the front. Therefore, the full range of McDonald’s hand movements are not visible in the recording.

Prosecutors also took task with a statement by Van Dyke that he shot at the knife, rather than at McDonald:

VAN DYKE:  “I shot at that knife.  I wanted him to get rid of that knife.”

PROSECUTOR:  “You’re not trained to shoot at a knife, are you?” the prosecutor asked.

“Why would you shoot at his knife; that’s not what you’re trained to do?”

“My focus was on that knife; I just wanted him to get rid of that knife.  That’s all I could think.”

Prosecution suggested Van Dyke could have simply stayed in his car. Van Dyke said he had a duty to protect people. “You have a duty to place somebody into custody,” Van Dyke said.

[Editor’s note: This piece has been updated to include video of Van Dyke’s testimony.]