‘This Is Torture’: Constitutional Attorney Weighs in on Another Weekend of Police Actions in Oregon (VIDEO) 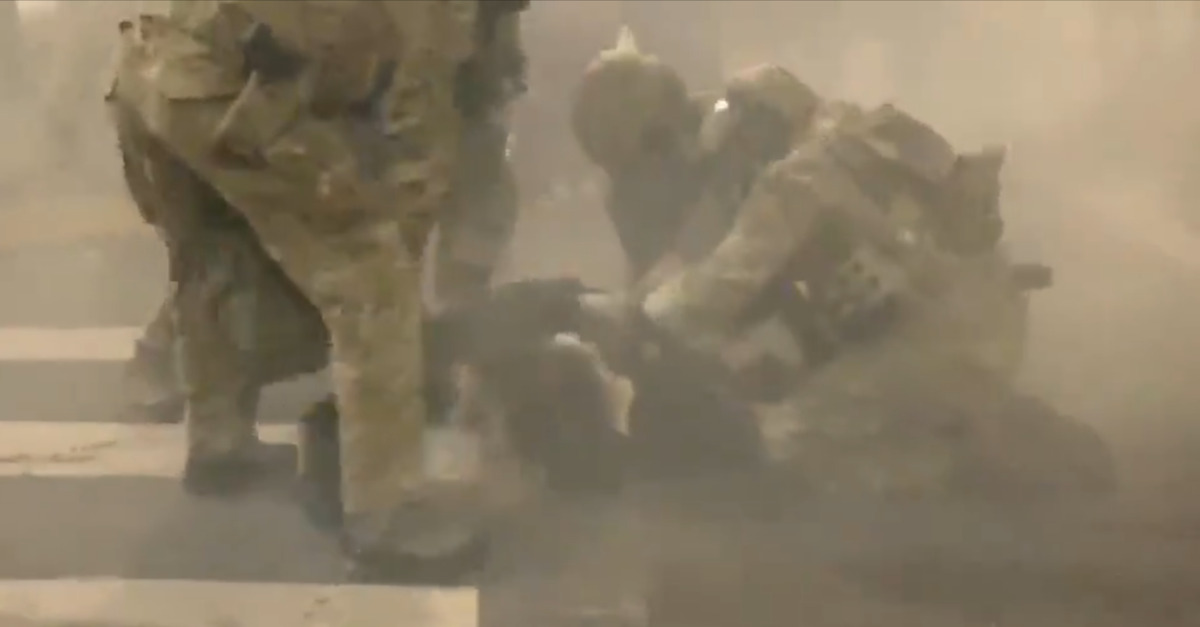 Federal, state and local law enforcement are again the subject of widespread criticism after another weekend of protests in Oregon.

“[F]ederal stormtroopers hold a protestor’s face in a teargas cloud for an extended span of time with no protection,” noted constitutional attorney T. Greg Doucette via Twitter while sharing footage of the detention. “This is torture btw.”

In the video, at least four DHS officers or agents can be seen grabbing and forcing one protester to the ground as a cloud of chemical smoke rolls in and briefly obscures what’s occurring.

“The gas is painful. You cry, you choke, your lungs burn. You fight the urge to rub your eyes,” wrote Sarah Jeong an attorney who originally shared the video on Twitter. “Some people puke. With the amount that is currently being dispersed I have found it impossible to remain in the vicinity and do my reporting without the use of a gas mask.”

“It is a fundamental precept of our constitutional system that punishment is only reserved for the guilty after they’ve had a fair trial,” he told Law&Crime via email. “This is another example of the brazen lawlessness and anarchy that Trump’s Troops engage in knowing that they’re protected by invented judicial doctrines like qualified immunity.”

DHS has not, as of yet, directly addressed the tear-gassing incident seen by thousands on social media–but they did criticize the protesters in general terms in a press release issued Sunday.

“The violent situation Portland has witnessed for the past eight weeks continues with violent anarchists rioting on the streets as federal law enforcement officers work diligently and honorably to enforce federal law, defend federal property, and protect the lives of their fellow officers,” the agency said.

The scene in the Pacific Northwest has devolved into nights of violence for several weeks now–since the Minneapolis Police killing of George Floyd in late May–when local and county police forces began using teargas on demonstrators. The federal response began in earnest in early July with a massive show of force against demonstrators outside of Portland’s federal courthouse.

It was later revealed that the Portland area agents, while acting under DHS control and authority, were a cross-authorized group of forces culled from the U.S. Marshals Service, U.S. Customs and Border Protection (CBP), and the Federal Protective Service.

A view from inside the courthouse was provided by Associated Press reporter Mike Balsamo in an article that has been widely praised for showing law enforcement’s perspective–and equally harshly-criticized for that exact same reason–on social media:

[S]omeone fired a commercial-grade firework inside the fence. Next came a flare and then protesters began using an angle grinder to eat away at the fence. A barrage of items came whizzing into the courthouse: rocks, cans of beans, water bottles, potatoes and rubber bouncy balls that cause the agents to slip and fall.

In a tweet, Balsamo referred to the fireworks as “mortars” — and was this criticized for using a turn of phrase that suggested Black Lives Matter protesters had somehow obtained military-grade material.

8️⃣2️⃣9️⃣ Eugene, OR: multiple EPD cops brutalize an unarmed 14yo girl for sport, while ignoring the counter-protestor assaulting people

In the video, four officers rush to grab the girl, pulling her hair and slamming her to the ground–while apparently ignoring a pro-police counter-protester punching a Black Lives Matter activist.

“This is why the riots are all happening, right?” she told local ABC affiliate KEZI on Sunday. “Because of police aggressiveness.”

Police claim the girl was throwing rocks at them while her mother maintains that her daughter simply kicked over a trash can.

“She’s a small girl,” girl’s mother added. “She’s very petite. I think that was a little out of control . . . especially since it was a child.”

The White House announced on Monday that additional federal forces would be deployed to Portland soon.