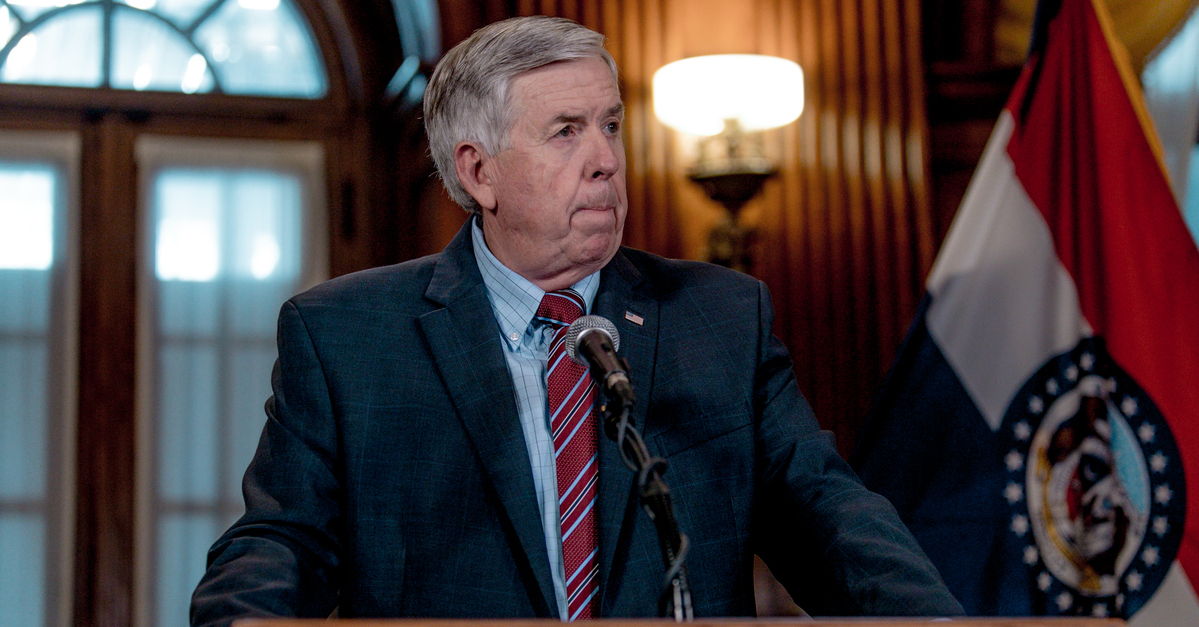 “It is illegal to wave weapons in a threatening manner–that is unlawful in the city of St. Louis,” Gardner told the Associated Press early Monday evening. She later tweeted similarly.

“You’re talking about the opportunity–the law–to stand your ground is what you’re talking about,” Parson told radio show host Marc Cox last week. “The Castle Doctrine–which I helped write in the state of Missouri. They did what they legally should do.”

“A mob does not have the right to charge your property or come on your property not knowing what the intent is,” Parson continued. “They had every right to protect themselves.”

Parson’s understanding of the law is unclear at best.

In the videos seen by millions, racial justice demonstrators do not actually appear to step onto the property owned by personal injury attorneys Mark McCloskey and Patricia McCloskey–so Parson’s reliance on the law he helped craft appears to be off-base here.

Harvard Law School Prof. Ronald S. Sullivan, Jr., similarly told the Washington Post that the castle doctrine “would still be unavailable” because “[t]he defendant has to be reasonably afraid of being in imminent danger.”  He said that the video of the McCloskeys make that argument “very difficult.”

The governor’s grievances with St. Louis’s top prosecutor are a matter of public record.

“What Kim Gardner is doing is just making the situation by far worse–making it more political–by even attempting to file charges against them,” Parson complained. “That thing is just out of control up there and somehow it’s gotta be reeled in.”

The prosecutor moved forward despite those gubernatorial misgivings.

Law&Crime previously forecast the exact charge that Gardner said she would be pursuing against the wealthy lawyers.

“By all means, I would, and I think that’s exactly what would happen,” Gov. Parson said in response to a question about a potential pardon for the two attorneys. “Right now that’s what I feel. You know, you don’t know until you hear all the facts and all that. But right now if this is all about them because they did a lawful act then yeah. If that scenario happened then I don’t think they’re gonna spend any time in jail.”

Gardner, the prosecutor, said she does not anticipate seeking jail time for what would amount to a Class E felony offense. Rather, she said, her office would recommend a diversion program such as community service should the McCloskeys be convicted.