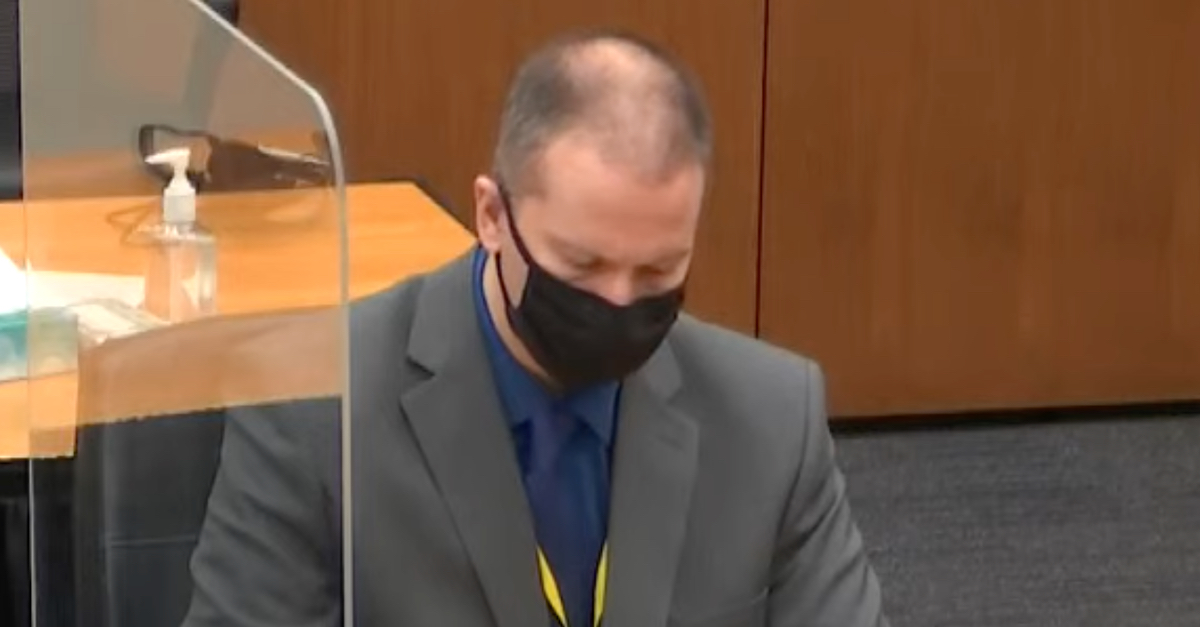 Prosecutors in the murder trial of Derek Chauvin scored an evidence victory Wednesday morning which could have broad repercussions for the case against the former police officer accused of killing George Floyd on May 25, 2020.

Chauvin’s defense attorney, Eric Nelson, asked Judge Peter Cahill via a Feb. 8 motion in limine to prevent Donald Williams, a college wrestler and trained MMA fighter who just happened to be a witness to the May 25th events, from testifying “as to his training, experience and/or expertise in mixed martial arts, boxing or other training on the grounds that it is irrelevant and overly prejudicial.”

Judge Cahill ruled that Williams would be able to testify mostly as the state requested.

Nelson argued that Williams’ testimony would not comport with the Minnesota Rule of Evidence or other criminal procedure laws. He also argued there was no legal foundation by which to consider Williams an expert and that any testimony about Williams’ MMA-influenced knowledge or skills were further irrelevant because Minneapolis officers did not receive the same training Williams purportedly received.

Nelson said in court Wednesday morning that Williams is visible wearing clothing bearing the name of the North Side Boxing Gym in witness video which shows Floyd’s restraint.

The defense did not seek to prevent Williams from testifying about “what he observed.” Rather, the defense feared the state would seek to qualify Williams as an “expert” in the fields of mixed martial arts, boxing, wrestling, or jiu jitsu. The defense complained that it had received no documentation of Williams’ official histories with those endeavors.

The state disagreed about the importance of Williams’ observations training and experience and argued to allow him to testify as to both.

Prosecutor Matthew Frank said Williams started wrestling at age 13 and continued through his college years. Williams subsequently fought between 18 and 20 professional fights and trained with officers from various Minneapolis-area police departments. Frank said Williams’ knowledge of how to leverage body weight was highly relevant to his observations of what occurred to George Floyd at the hands of Chauvin and other officers on May 25.

“As part of his training, they are taught choke holds, and that is a way of controlling another person by rendering them unconscious,” Frank said. “As part of that, [Williams] knows how it feels to be rendered unconscious, and they actually practice that in their training. They practice it in part because they have to know when it’s time to tap out . . . if it goes too far, somebody can be seriously injured. Somebody can die. That’s all part of his training and his experience in mixed martial arts.”

Frank said the defense characterized bystanders to Floyd’s restraint and ultimate unconsciousness as an “unruly mob.” Rather, as it comes to Williams, prosecutors argued that someone with the requisite knowledge of exactly how to choke someone to death was on scene warning the officers of precisely what not do.

“Williams . . . was so vocal because he knew all of this; he knew how serious the situation was,” Frank said. “He knew that Chauvin was killing this man . . . because Mr. Williams knew from 10 years of training and experience in mixed martial arts alone that this was very dangerous and was most likely cutting off [Floyd’s] blood supply and his ability to breathe.”

Judge Cahill asked whether Williams used the phrase “blood choke” during the May 25 incident. Frank said that he did — and that he knew its ramifications.

“Mr. Williams will explain that . . . a blood choke is where you . . . try to interfere with the blood flow to render that person unconscious. And he recognized aspects of that in what Mr. Chauvin was doing at the scene . . . that’s partly why he’s so agitated and so vocal at the scene . . . and that’s why he’s so expressive.”

Frank said Williams also recognized Chuavin’s use of a move Williams knew as a “shimmy,” which is designed to tighten a chokehold and to render it more effective.

“It can be seen that Mr. Chauvin is rocking back and forth to secure that hold —to secure Mr. Floyd to the ground,” Williams explained by referencing video from May 25.

Judge Cahill said he would stop Williams from testifying about items which might become “a medical opinion”  about what causes death. However, Williams “is entitled to say what his experience is, to explain what he meant by” what he said, and to explain “the shimmy . . . that’s what he thought he saw and that he thought it had gone too far.” Williams will also be allowed to testify that he thought he saw Chauvin using a “blood choke” hold and, based on his experience, Chauvin kept that hold on Floyd for far too long.

The manslaughter charge requires prosecutors to prove that Chauvin’s “culpable negligence . . . create[d] an unreasonable risk” and that Chauvin “consciously” took the chance of “causing death or great bodily harm to another.”

The evidence ruling will allow prosecutors to characterize Williams as a learned bystander whose warnings Chauvin should have heeded. Even though the state does not need to prove Chauvin intended to kill Floyd, the state does need to prove Chauvin intentionally committed an underling third-degree felony assault which in turn led to a death. Williams’ testimony will allow prosecutors to more thoroughly argue that drugs and other underlying conditions were not the true cause of Floyd’s death. Williams’ assessment — that the specific types of holds he witnessed Chauvin using on Floyd were known to him to render unconsciousness and death — will likely become a cornerstone of the state’s case.

Also on Wednesday, attorneys confirmed that the three other former police officers accused of aiding and abetting murder will not testify at Chauvin’s trial.

Watch the full motions hearing below: