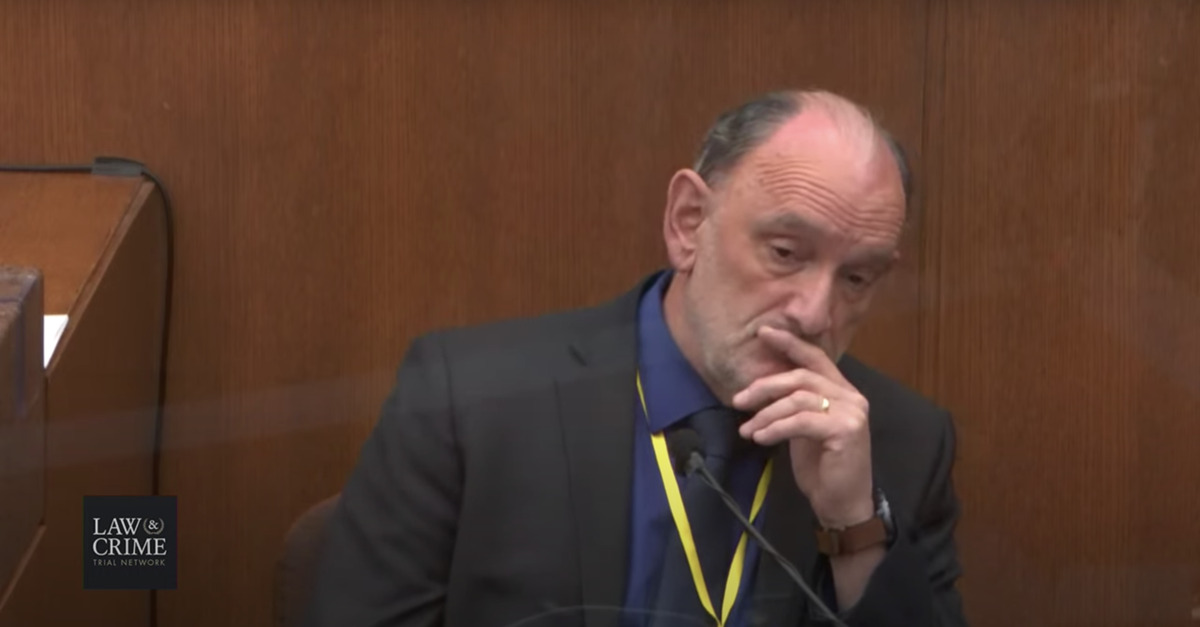 Former Minneapolis cop Derek Chauvin, accused of murder in George Floyd’s death, called a witness in his defense on Wednesday morning who is currently being sued by the American Civil Liberties Union (ACLU) for allegedly covering up a Black teenager’s death in Maryland.

Doctor David Fowler on the stand for the defense of #DerekChauvin he is a retired chief of medical examiner for Maryland. He was in that role for 17 years. He will likely say that #GeorgeFloyd died from something other than #DerekChauvin knee. pic.twitter.com/YJjLM7fZSm

Dr. David Fowler is Maryland’s former chief medical examiner. During his tenure there, he ruled that the 2018 killing of Anton Black by members of various local police departments was an accident.

Body camera footage showed the 19-year-old struggling as he was pinned with his face, chest and stomach to ground–in effectively the same prone position that George Floyd was in while he died two years later–for over six minutes by Ridgley Police Chief Gary Manos.

The lawsuit explicitly accuses Fowler of taking part in a cover up.

The filing alleges [emphasis in original]:

Whether or not [Fowler] personally believed police acted improperly in Anton’s death, the [Medical Examiner’s] responsibility was to opine based on reasonable medical and professional standards as to what caused Anton’s death, not to cover up for the officers’ actions. But for the volitional actions of other persons, Anton would be alive, but upon information and belief the [Medical Examiner] knowingly and intentionally misrepresented his death as, alternately, one of “natural” causes or “accident.” This intent was demonstrated in part by [Fowler’s] assurance to the [Maryland State Police] that Anton’s neck “looked good.” By ignoring overwhelming and irrefutable evidence of Anton’s prolonged restraint by police as captured on body camera footage; failing to acknowledge the basic principle that compressing a person’s body interferes with their ability to breathe; failing to acknowledge that positioning a person face down with their legs bent back further interferes with their ability to breathe; making misleading statements suggesting that asphyxia due to restraint must be ruled out due to the absence of physical signs of asphyxia on Anton’s body; making false representations about the significance of Anton’s myocardial tunneling; misrepresenting and exaggerating the role of anomalous right coronary artery; claiming that bipolar disorder contributed to Anton’s death; and departing from well-established customs in the field that deaths at the hands of another should be characterized as homicide, [Fowler] sought to and did intentionally mask the true cause and police culpability for Anton’s death.

“As a direct result of [Fowler’s] improper and false characterization of the cause of death, the State’s Attorney for Caroline County determined that there was no basis for any criminal prosecution of the officers responsible for Anton’s death,” the lawsuit continues.

Filed in federal court in December of last year, Black’s family claims that Fowler and others “covered up and obscured police responsibility for Anton Black’s death” in violation of the First and Fourteenth Amendments and the Maryland Declaration of Rights.

Black’s family claims Fowler and others “falsely attribut[ed] the cause of death to a heart condition, bipolar disorder and/or other natural causes, thereby ‘blaming the victim’ for his own death and obscuring official responsibility, resulting in significant impairment and denial of plaintiffs rights to seek legal redress for their harms.”

An amended complaint outlines the theory of liability here:

As direct and proximate results of Defendants’ practice of obscuring police responsibility in investigations of deaths during police encounters, resulting in the false reporting of Anton’s death as an accident attributable to natural causes rather than homicide, Defendants [Assistant Medical Examiner Russell] Alexander and Fowler created enormous, state-imposed obstacles to Plaintiffs’ ability to seek legal redress for the harms they suffered as a result of Anton’s killing and to hold police accountable for his death.

Fowler has responded to both complaints with motions to dismiss based on the family’s alleged failure to state a claim.

“Plaintiffs have not pleaded any such civil claims that could have been brought if not for the medical examiner’s opinion,” the medical examiner’s latest motion argues. “In fact, their Complaint does just the opposite. It actually brings substantive claims against various individuals, officers, and governmental entities that Plaintiffs seek to hold civilly responsible for Anton Black’s death.”

On Wednesday, Fowler testified that Floyd died of a cardiac arrhythmia while he was restrained by the Minneapolis Police Department. But he said it wasn’t exactly cut-and-dried. In his opinion, Fowler said, fentanyl, methamphetamine, carbon monoxide from the police vehicle and adrenaline combined to cause Floyd’s death and that the ultimate cause cannot be known for sure.

Law&Crime Network host Brian G. Buckmire wondered whether the prosecution might bring up Fowler’s ongoing lawsuit as it relates to the “credibility of his findings.”

As of this writing, the state’s efforts to impeach Fowler’s credibility did not include the coverup allegations.