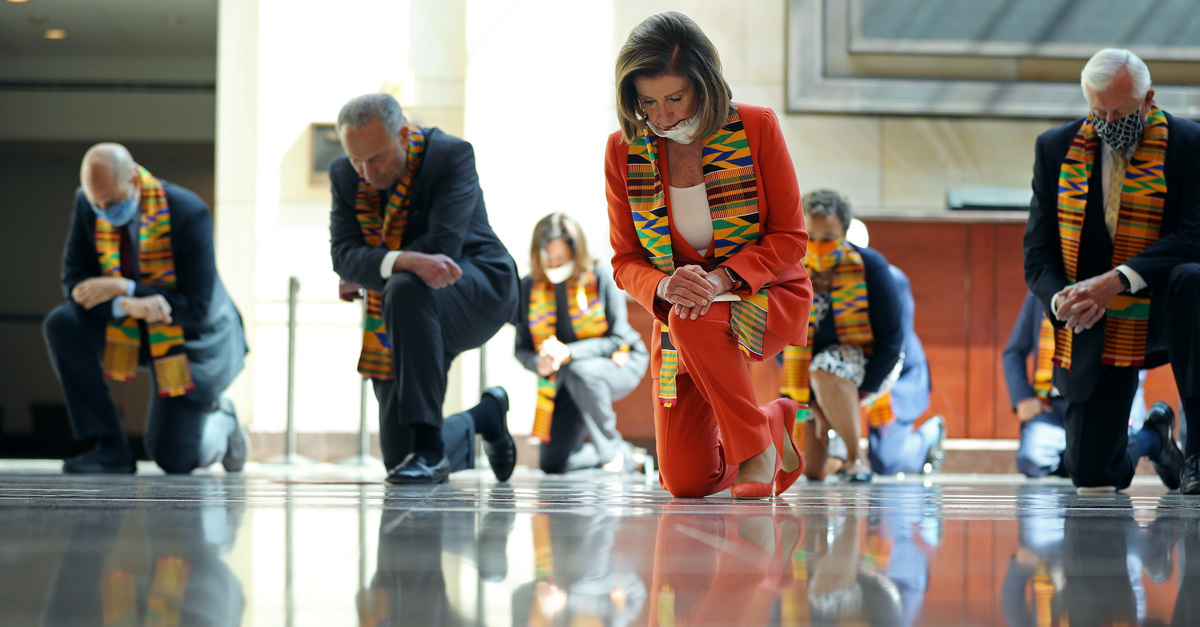 Democrats in the U.S. House of Representatives and Senate unveiled a police reform bill on Monday in response to widespread and prolonged racial justice protests and riots that erupted after the Minneapolis police killing of George Floyd in late May.

The proposal is being promoted by supporters in Congress as both “bold” and “unprecedented,” but advocates and organizations long-focused on reforming the institution of American policing say that such characterizations of the bill are a bit of an oversell. Others insist the bill may do more harm than good to African American communities.

Other critics faulted the bill for ignoring one of the demands of the #BlackLivesMatter movement: the call for reductions to police budgets nationwide. Instead, tucked into various sections, the Justice in Policing Act authorizes nearly $1 billion additional dollars in law enforcement spending.

“We will reject any measure that calls for increases in police funding—it is anathema to our goal of keeping Black communities safe,” Center for Constitutional Rights staff attorney Angelo Guisado told Law&Crime. “Take that money and fund the community with jobs, education, debt cancellation, and direct payments instead.”

“The bill introduced today takes significant steps to protect people and ensure accountability against police violence,” said the ACLU’s senior legislative counsel Kanya Bennett. “But the legislation also provides hundreds of millions more to law enforcement, and for the ACLU, that’s a nonstarter. While many of the reforms in this bill are laudable and vital, more must be done to change the role of police in our society fundamentally. There can be no more Band-Aid or temporary fixes when it comes to policing, which is why we are calling for divestment from law enforcement agencies and reinvestment into the Black and Brown communities that have been harmed by over policing and mass incarceration. The role of police has to be smaller, more circumscribed, and less funded with taxpayer dollars.”

Headline interpretations of the bill suggest the Democratic-led effort aims to prohibit use of force except as a last resort, that it bans chokeholds, outlaws racial and religious profiling and makes it easier for citizens to hold police officers accountable in court.

But the proposed law goes about each goal in drastically different ways, meaning those initial headlines aren’t so clear.

The legislation aims to decrease police use of force by way of creating a national registry that relies on use of force reports and which conditions grant funding on police departments filing such reports as well as “use of force training for law enforcement agencies and personnel, including training on de-escalation, implicit bias, crisis intervention techniques, and adolescent development.”

Use of the Spending Clause is nothing new for Congress; similar efforts were used to coerce the states into raising their drinking age to 21 during the 1980s. But advocates at the center of the anti-police brutality movement caution that using the old model is actually counterproductive toward the movement’s actual goals.

“Giving more money to the police undermines all of the local organizing to reduce police budgets,” noted human rights attorney and Black Lives Matter-affiliated activist Derecka Purnell. “People are winning. Mayors will be seduced to take this money and ignore local organizing. Please do not support this #JusticeInPolicingAct.”

“The Dems keep pushing legislation that’s reminiscent of Obama’s DOJ,” Purnell added. “But remember: the same amount of people were killed, arrested, and jailed with these same reforms. We need to reduce contact between police and civilians, not increase community policing.”

As far as “banning” the use of chokeholds by police, the language of the bill itself stakes out decidedly less audacious territory. The relevant portion is titled: “Incentivizing Banning of Chokeholds and Carotid Holds,” and once again ties this incentive to new federal outlays of hundreds of millions of dollars in additional federal spending for police departments. Those who ban the holds are eligible for certain grant funds; those that don’t are not.

The bill, however, does not envision cutting off police departments who refuse to ban chokeholds from federal grant funding entirely.

“Simply put, the Black Caucus and Democrats are out of touch with what is happening in the country,” said Black Lives Matter activist Charlene Carruthers–who also slammed the bill for drastically increasing police funding. “They are trying to feed us scraps when we are demanding a more robust spread for us all.”

A separate section, which calls itself the ‘‘Eric Garner Excessive Use of Force Prevention Act,” attempts to define chokeholds as Civil Rights violations. But, critics said, that section provides no enforcement mechanism that would give the provision any teeth.

“[N]o private right of action to enforce ban on chokeholds,” American Civil Liberties Union (ACLU) attorney Josh Block said on Twitter. “Also, given the evidence of brutality at the hands of federal law enforcement, I don’t understand why this doesn’t amend [42 U.S.C §1983] to include people acting under color of federal law.”

The Justice in Policing Act does, on the other hand, create a new private right of action for victims of racial and religious profiling–an enforcement mechanism that advocates said they would like to see more of spread throughout the bill.

And while the proposal doesn’t attempt to revoke the controversial doctrine of qualified immunity in its entirety, it does end the judicially-created carve-out for local law enforcement. But critics weren’t quick to shower accolades on the Democrats’ reform plan here either.

“It isn’t enough to just eliminate qualified immunity,” Block added. “We need a cause of action that provides protection above the bare constitutional minimum.”

People for the American Way Senior Director of Outreach and Public Engagement Diallo Brooks said the bill is proof of the power of nationwide protests.

“The introduction of the Justice in Policing Act is a testament to the incredible power and persuasiveness of the nationwide protests following the deaths of George Floyd, Breonna Taylor, and so many more,” Brooks said in a statement. “Clearly, the people have spoken about the need for policing reform in this country and Congressional Democrats are listening. We’re encouraged by all the important reforms included in this bill, and we feel confident that as we go forward this legislation will get even stronger.”

“At the same time, we recognize that there is much more work to be done to change systems that for far too long have had devastating impacts on Black lives,” he continued. “Police reform is one piece of the puzzle but is not the whole answer.”

Civil Rights attorney Sasha Samberg-Champion also saw a lot to like but cautioned that the bill was only a preliminary effort.

“This proposal, if enacted, would make very meaningful changes,” he told Law&Crime. “It would empower the Justice Department to do a great deal more in changing police practices around the country for the better. It also would make it much easier to sue state and local law enforcement for illegal practices. I can think of other things I wish were in this, but this bill is a very good start.”

The ACLU also held out hope for getting better results later on.

“As the bill moves toward committee consideration, the ACLU will work to ensure that federal dollars are spent investing in the kinds of services that help build stable, safe Black and Brown communities,” Kanya Bennett said. “Funneling this money into law enforcement represents a missed opportunity to fix the hurtful legacy that police violence has left on these communities.”