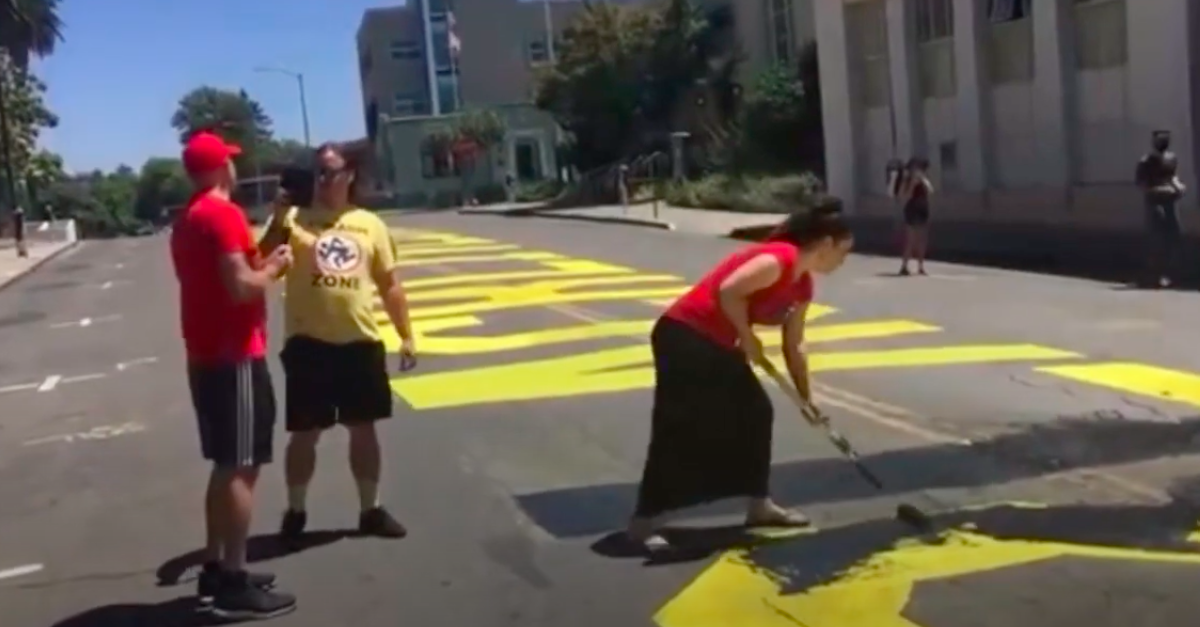 The California couple accused of a hate crime and vandalism for painting over a “Black Lives Matter” mural on the street in downtown Martinez pleaded not guilty Tuesday at their court arraignment.

An attorney for Nicole Claudia Anderson, 42, and David Richard Nelson, 53, called the hate crime charges against the couple as “outrageous,” claiming a “highly politicized” district attorney was pushing for the charges, according to 6ABC.

Anderson and Nelson were each charged with three misdemeanors — violation of civil rights, vandalism, and possession of tools to commit vandalism or graffiti. A defense attorney for the couple said that his clients have the right to show their disagreement with how their tax dollars are being spent.

“Just as peaceful protesters have the right to march and display their political views in a myriad of different ways, they have the same right to display their dissatisfaction and disagreement with their tax dollars being used to sponsor a radical organization, Black Lives Matter,” Bill Essayli said outside the courthouse.

Essayli, who in 2018 unsuccessfully ran for the California State Assembly as a Republican, is representing Anderson and Nelson along with the Center for American Liberty (CAL), per The Mercury News. CAL is a Virginia-based nonprofit organization that filed a lawsuit against Gov. Gavin Newsom (D) last month to compel the governor to re-open the state’s schools.

“We think the charges here frankly are outrageous. It’s something I’ve never seen as a former prosecutor, the law used in that matter,” Essayli said. “The fact that my clients disagree with (Black Lives Matter’s) mission is a problem for the DA and she is charging them with a hate crime.”

As previously reported by Law&Crime, a video which went viral over the July 4 weekend showed two people–allegedly Anderson and Nelson—spreading black paint over the yellow lettered-mural with paint rollers.

The man in the video wore a MAGA hat and a red shirt that said, “Four More Years” and can be heard arguing with bystanders filming the couple’s conduct.

He continued to lecture the bystanders, saying, “Keep America Great Again, that’s right. Why don’t you guys learn about history, and the Emancipation Proclamation Act?”

The man did most of the talking, but the woman made a couple of brief outbursts. “Keep this shit in fucking New York,” she said, adding, “This is not happening in my town.”

District Attorney Diana Becton declined to comment on Essayli’s claims, but last month said the defaced mural was meant to be “a peaceful and powerful way to communicate the importance of Black lives in Contra Costa County and the country.”