Black Militia and Far-Right Militia Face Off in Louisville 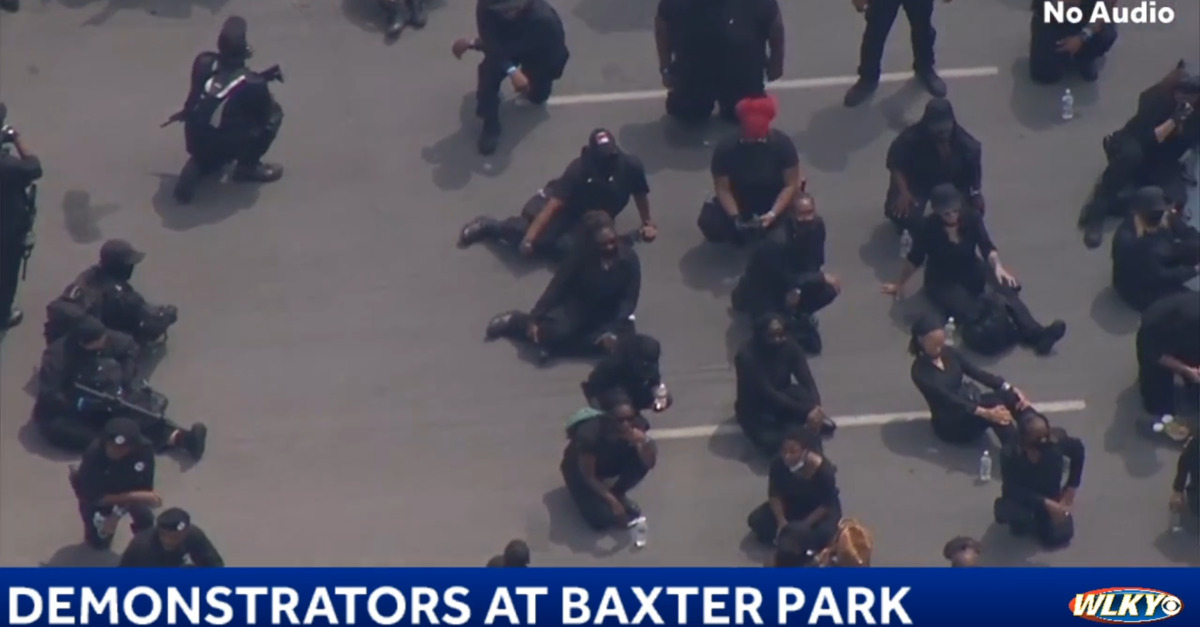 Three people were injured when a gun accidentally discharged prior to a Black Lives Matter protest in Louisville, Kentucky.

Members of the Not Fucking Around Coalition (NFAC), a Black militia, were preparing to march downtown when the incident occurred–each of those struck by the errant gunfire were members of the group.

“All involved are members of the NFAC and there are no outstanding suspects,” Louisville Metro Police Chief Robert Schroeder said, in a statement. “This is a tragic situation that could have been much worse. I encourage anyone choosing to exercise their Second Amendment rights to do so responsibly.”

Two of those shot were reportedly transported away on stretchers and then via ambulance to a nearby hospital. None of those injured by the friendly fire episode sustained life-threatening injuries.

Multiple local media outlets reported on the unintentional shooting–which occurred against the backdrop of a widely-telegraphed potential stand-off between the NFAC and the Three Percent Militia–a far-right, paramilitary and anti-government organization founded just after Barack Obama was elected president in 2008.

NFAC members were out on Saturday in order to protest the Louisville police department’s handling of the Breonna Taylor situation.

After announcing their plans, the Three Percenters said they would also be in attendance with “boots on the ground.”

The confrontation, however, apparently did not last long.

The Louisville Courier-Journal reported there were “a few hundred people are toting guns and facing off at Jefferson Street on Saturday, where LMPD officers, in full riot gear, separates the two groups by barricades.”

2. Responders tell @WLKY that while the NFAC was assembling, someone’s firearm accidentally went off within formation.

Told three people shot— according to MetroSafe. No word on severity of injuries or if this will cancel the March which was reported to start 75 mins ago

Earlier this month, the NFAC marched through Georgia to confront white nationalists and the Ku Klux Klan while demanding the removal of America’s largest monument to the former Confederacy.

“We are a Black militia,” founder Grand Master Jay told Newsweek. “We aren’t protesters, we aren’t demonstrators. We don’t come to sing, we don’t come to chant. That’s not what we do.”

In early March, the Louisville Metro Police Department served a no-knock warrant on the 26-year-old woman’s apartment because they believed she received drugs intended for someone who lived 10 miles away–despite the local postal inspector contradicting law enforcement’s assessment of the facts.

As several officers raided the apartment based on their understanding of the evidence, Taylor’s boyfriend Kenneth Walker acted in self defense, firing at the police he believed to be intruders. Sergeant Jonathan Mattingly was injured by Walker’s attempt to protect his girlfriend.

The officers fired back more than 20 rounds and Taylor, an EMT, was shot eight times. She was pronounced dead at the scene.

Afterwards, the police involved filed a mostly blank report–which incorrectly stated Taylor suffered no injuries. Among other discrepancies, that report also claimed no force had been used when entering Taylor’s apartment. This was also incorrect–police used a battering ram to gain entry.

Taylor’s death–and the official and quickly-changing narrative given by authorities–quickly became part of the national conversation and widespread demonstrations over systemic racism in American policing following the Minneapolis Police Department’s killing of George Floyd in late May.