Texts Reveal What Happened During Manhunt for Ethan Crumbley's Parents

‘I’m Not Normally Such a Hot Mess’: Documents Reveal What Defense Attorney Was Telling the Police During Manhunt for Ethan Crumbley’s Parents 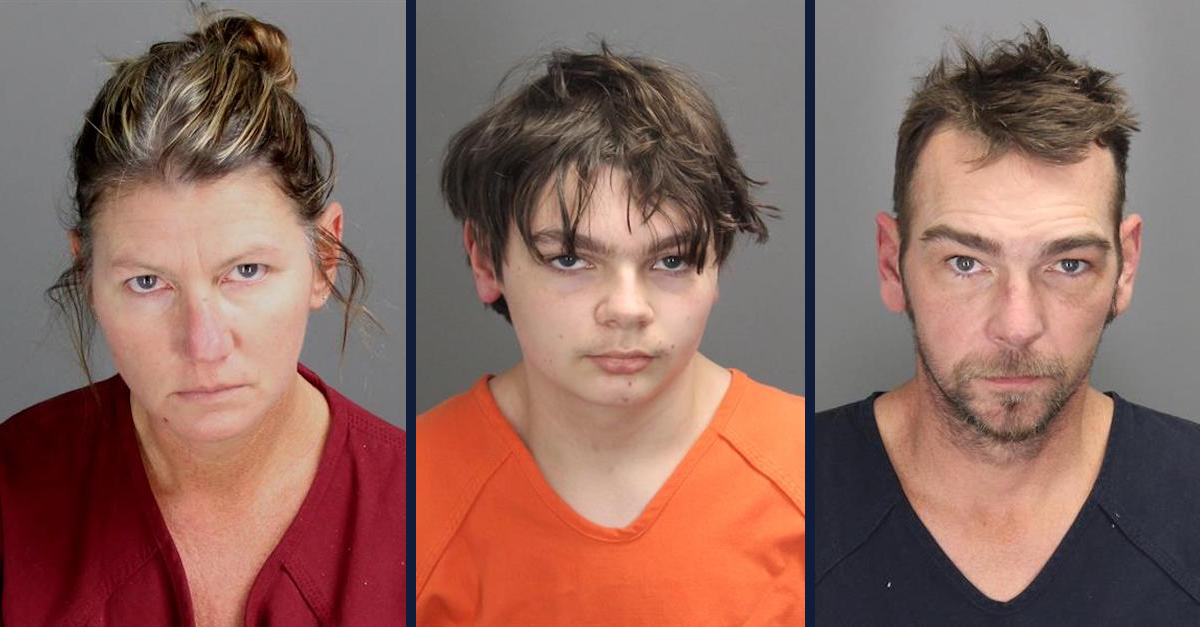 An attorney who represents the mother of accused Oxford, Mich. school shooter Ethan Crumbley, 15, provided an interesting series of explanations to law enforcement when officers attempted to secure the arrest of her clients, newly filed court documents indicate.

James and Jennifer were on the lam between Friday, Dec. 3, 2021, and Saturday, Dec. 4, 2021, as authorities launched a manhunt for the couple. The duo was eventually caught holed up in a building just north of downtown Detroit in the early hours of Dec. 4.

The attempts to bring the parents into custody led to a considerable amount of jockeying between Smith, law enforcement, and the office of Oakland County Prosecuting Attorney Karen McDonald. Smith claimed in television interviews that her clients were scared and were trying to turn themselves in. Prosecutors said the clients were on the run and trying to avoid being caught. Smith pushed back against those claims in court. A judge ultimately determined that the Crumbleys were a flight risk and held each of them on a $500,000 cash bond. 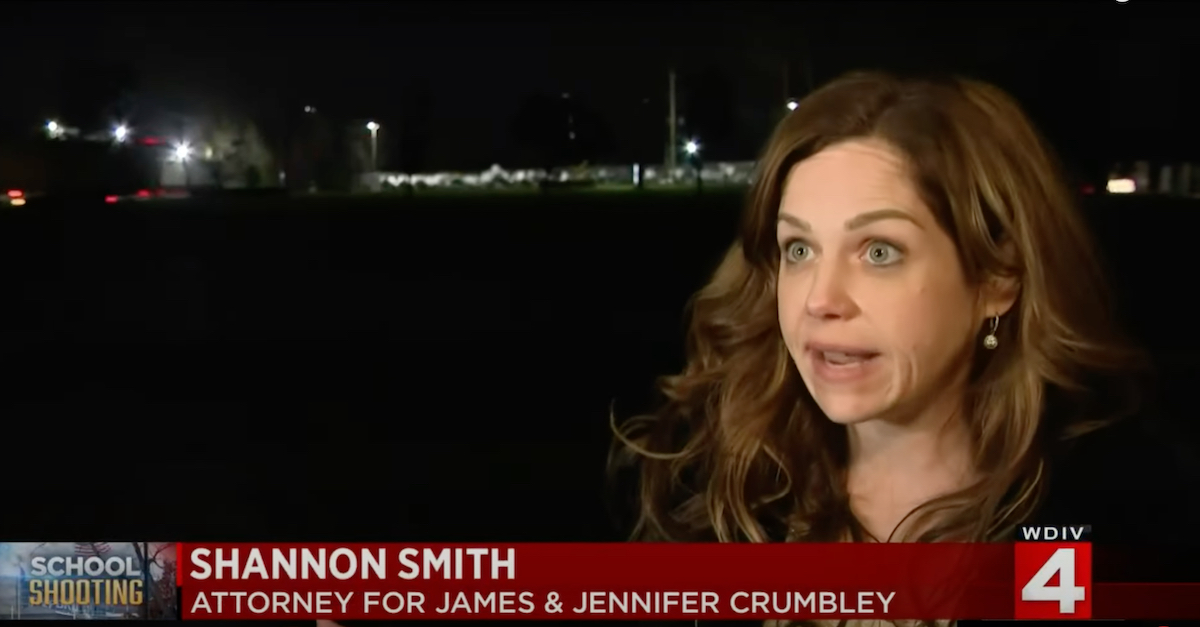 Defense attorney Shannon Smith appears in a Dec. 3, 2021 screengrab from WDIV-TV in Detroit.

In a court appearance on Dec. 4, 2021, McDonald said the Crumbleys had apparently lied to Smith about turning themselves in. The prosecutor fought back against claims by the defense attorneys that the couple was terrified and scared of what was going to come next given the charges against them. According to McDonald, referencing Smith:

Her representation was that they wanted to turn themselves in, and they were on their way to do that. However, they didn’t turn themselves in, and we were told they were out of town, except yesterday morning they withdrew $4k from an ATM in Rochester Hills, very close to the court where they could have turned themselves in with no events and no efforts on behalf of law enforcement. Instead they fled, and they sought multiple attempts to hide their location and were eventually tracked down after they parked their car somewhere. A witness saw it.

According to court records filed by prosecutors, there is more to the story. Smith, in a series of text messages with one Sgt. D. Hendrick, an agent with a Fugitive Apprehension Team, said the following when contacted by law enforcement. The text messages are now attached to a state exhibit in the case.

“It’s a hell of a day,” Smith told Hendrick in a text message at 5:24 p.m. on Dec. 3. “My house was listed for sale so I have my 4 kids and 4 dogs at my office this afternoon and evening while my house is being shown.”

“So I’ll get in touch with my partner and figure out what’s going on” with the Crumbleys, she continued. “I told her to tell them they needed to come back here.”

“I told Mariel [sic] [Lehman] that we would be happy to meet them anywhere in the State so that we can safely and without media take them into custody,” Hendrick replied. “If they get pulled over the officers could conduct a felony stop and have the[m] laying face down in the street. I would like to avoid all of that if possible. Feel free to give them my number and I will give them my word that it will go smoothly.”

“They are terrified because they were expecting me to get info because Karen M[cDonald] told me she’d get back to me this morning,” Smith continued. “I do not know where they are but they assured me they are heading back and will call me so we can get them arraigned.”

I was in trial all day . . . Mariell was flying back from a family trip to Florida so our whole day ended up being phone tag and at least 100 people texting us blowing up our phones.

My best guess from talking to them is that i’ll be texting you at 7 am tomorrow.  I wish the news media would chill out on this because it’s terrifying on top of a huge sad and awful case.  But I’ll text you in the AM.  I have talked to them by phone several times tonight.  The dads cell phone died and they have no way to charge it so some of the calling issues were due to that. But we have Jennifer’s number and THEY ARE COMING.

“Ok I understand they are scared but there [sic] best bet for a quiet surrender is to contact me,” Hendrick wrote.

“Thank you,” Smith replied. “I’ve told them it needs to be ASAP and they do get it.”

“I’m sure you realize the longer they hide the higher the bond request is going to be,” Hendrick cautioned.

“Absolutely,” Smith wrote. “I would have brought them in today but I couldn’t get any info fast enough. They initially asked if they could go in Monday am and Mariell and I said no.”

The defense attorney then partially blamed her own personal circumstances for the delay.

“Today was also insane for me personally,” she texted Hendrick. “I am selling my house and there was an open house today so my four kids, four dogs, [a]nd cat were at my office while I was in trial. I’m not normally such a hot mess trying to coordinate things. We will get them in. They wouldn’t have paid us what they paid if they plan to run.”

At 11:47 p.m., Hendrick noted that he called Smith “and advised her that the vehicle had been located and that there were several officers, K9 Units, and [a] helicopter searching for the Crumbleys.”

“I advised her to contact them and tell them to surrender to us,” Hendrick wrote.

At 11:49 p.m., Smith called back and said Jennifer Crumbley’s “phone was off” and that the attorney “was unable to reach her” client, Hendrick noted.

“I still can’t get through on the wife’s phone,” Smith appears to have texted Hendrick. “Were they apprehended,” she then immediately queried.

“Not yet but I be there [sic] getting cold,” Hendrick wrote back.

Prosecutors skewered the defense narrative in a motion to object to any lowering of the requested bail amount in the defendants’ favor:

The suggestion that either of the Defendants did not have access to a phone, or could not get a phone charger is not credible. Defense counsel’s reference to “dad’s phone,” singular, omits the fact that the Defendants had four cell phones when they were found. Two were phones to replace the phones that were taken into evidence on the day of the shooting. The FAT [Fugitive Apprehension Team] Agent was aware of those two phones, had their numbers, and attempted to use those numbers to locate Defendants. The other two phones were obtained by Defendants later, presumably for the express purpose of attempting to evade arrest. That presumption is bolstered by the fact that Defendants attempted to destroy one of the phones before they were apprehended.

Prosecutors continued the pile-on against the defendants and their attorney:

The suggestion that the Defendants could not obtain a phone charger is similarly incredible.  Phone charges are available at every CVS, Walgreens, gas station or corner store.  The only thing keeping Defendants from getting a phone charger was their desire not to get caught.  That is undoubtedly the same reason they parked their car in such a way that the license plate could not be seen from any angle.  Defense counsel’s statement on December 3, 2021, that her clients were “making their way back” is simply false.  Surveillance video of the building where Defendants were found shows that they entered the building at 11:00 a.m. and never left the premises. In short, all of Defendants’ actions contradict any intention to turn themselves in voluntarily, and support that they were fleeing to avoid prosecution.

Elsewhere in the document, prosecutors provided additional detail about how the couple was arrested:

They gained access to an empty commercial building and hid inside a locked art studio for several hours. Even after they had been charged and even after they had been advised by the owner that they needed to vacate his property, they remained inside behind locked doors, ceasing all communications with their retained counsel until the Fugitive Apprehension Team apprehended them, and at least one of the four burner phones had been intentionaly smashed.

At a Friday afternoon hearing to argue the matter, the defense accused the prosecution of spreading “false, misleading, and irrelevant statements” in its response to the defense motion.