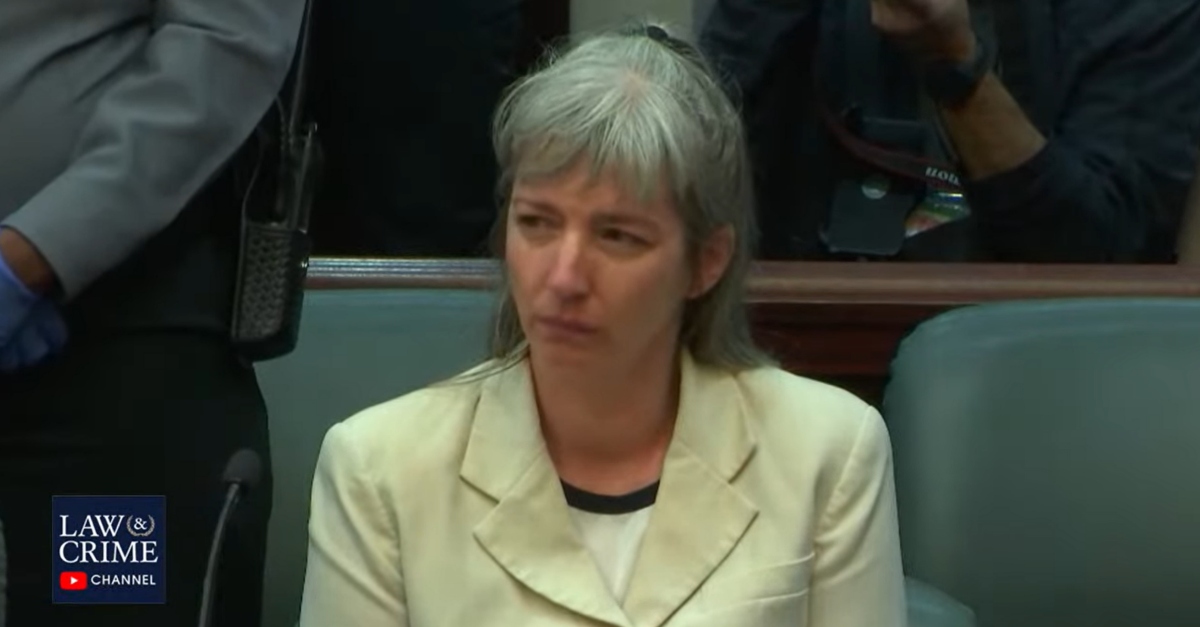 After dodging a conviction of second-degree murder in her husband’s death, a woman received a year of probation for tampering because she cleaned up the scene where she stabbed him to death.

#DanielleRedlick, the woman who was acquitted of murdering her husband in June, was sentenced to one year of probation for tampering with evidence. @LawCrimeDaily pic.twitter.com/4DywqwY2Ak

Danielle Redlick, 48, was sentenced on Friday. She’ll get her freedom when that term wraps up, but she leaves behind a broken family. Her now-adult daughter Jadyn Redlick, who testified against her at trial and was not home during the killing, ripped into her in a letter read by attorney Cheney Mason, according to WESH. The daughter unsuccessfully demanded a no-contact order protecting her and her brother from their mother.

“You may all be fooled by the incredible mask this woman presents to you all, but I am not,” Jadyn reportedly wrote. “My father did not get away in time, and I am so worried for my brother. Judge, please make some kind of stipulation that Danielle not be allowed near myself and Sawyer.”

“I have the … fear of being murdered,” Mason read. “… I lost everything at once and it was broadcasted to the world.”

Danielle maintained at her trial she only killed her husband — and former stepfather — Michael Redlick, 65, in self-defense on Jan. 11, 2019 at their home in Orange County, Florida.

“Aren’t you afraid to be home alone with me without the kids?” he told her, according to her testimony. She said he was physically abusive throughout their marriage. They met in 1996 when she was 22 or 23 years old, she testified. Danielle said Michael Redlick was dating her mother and had a “spontaneous marriage” in Vegas after her mother learned about having an “aggressive stage 4 breast cancer,” Danielle said. Her mother died in months. From there, Danielle and Michael bonded over time, with him supporting her, visiting her where she worked as a bartender, and inviting her to do more things together.

“I grew to enjoy it,” she said. “He was kind of worldly and smart, so these are new and exciting things for me. At some point it turned into a romantic relationship.”

Danielle Redlick was manipulative and told shifting stories about Michael’s death, such as telling the 911 operator she believed her husband had a heart attack, according to authorities.

Danielle was actually on a dating site while the man lay dead on the floor, authorities said. Based on her own testimony, she believed that he initially survived the stabbing, prosecutor Sean Wiggins noted. But she did not look for help or attempt amateur CPR, instead letting him bleed to death, the state said. She only called 911 when she slit her wrists 11 hours after the killing, Wiggins said. At that point, she was bleeding and in danger.

Jadyn had testified at trial that her mother was “very toxic, very manipulative,” and the primary source of toxicity in the relationship.

“[Danielle] has dreams of helping other women and administering to less fortunate,” one letter said. “… I believe Danielle has already paid a steep price.”

Danielle Redlick received credit for time served behind bars, so she will not have to spend any more time there. Her defense presented letters on her behalf from ministry volunteers at the local jail, according to Orlando Sentinel reporter Monivette Cordeiro.

“[Danielle] has dreams of helping other women and administering to less fortunate,” one letter said. “… I believe Danielle has already paid a steep price.”