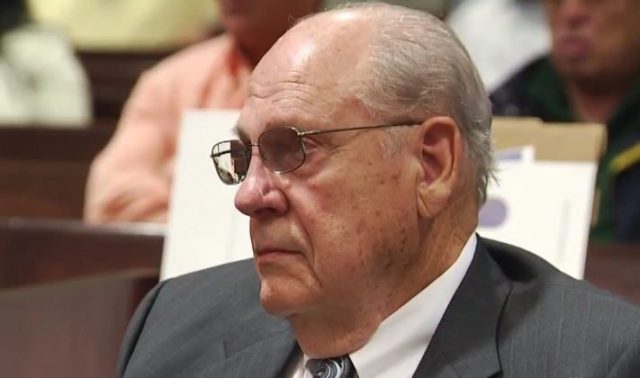 A week after a hearing concluded where Curtis Reeves and his attorney tried to argue that he was justified in fatally shooting a man in a Florida movie theater in 2014, Judge Susan Barthle ruled that the state’s ‘Stand Your Ground’ law did not apply here, and that Reeves will have to stand trial. Reeves is charged with second degree murder for killing Chad Oulson during an altercation that began when Reeves complained that Oulson was texting during previews. The “Stand Your Ground” law says that if a person is in reasonable fear of death or serious injury, they can use deadly force without having a duty to try to escape the situation first.

Reeves, a retired Tampa Police captain, claimed during the hearing that he feared for his life after Oulson hit him in the head and verbally threatened him, and that’s why he drew his gun and fired. However, multiple eyewitnesses who were in the theater at the time had a different version of what happened. None of them saw Oulson strike Reeves, and at least one felt that Reeves was the aggressor. Judge Barthle clearly didn’t buy Reeves’ version of what happened.

The judge wrote in her decision:

The physical evidence contradicts the defendant’s version of events. … Which begs the question, why did the defendant say he was hit in the left eye, to the point of being dazed, when the video images and basic physics indicate that he did not get hit in the left eye with anything?  The logical conclusion is that he was trying to justify his actions after the fact.

Because the defendant’s testimony was significantly at odds with the physical evidence and other witness testimony, this court has considerable doubts about his credibility, and is not willing to come to the conclusion that these circumstances are those envisioned by the legislature when the ‘stand your ground’ law was enacted.

If Judge Barthle had sided with Reeves, the ‘Stand Your Ground’ law would have kicked in, and Reeves would have been immune from charges. Since the judge ruled against Reeves, he will now have to go before a jury, who will determine his fate. Reeves can still claim self-defense at trial, which includes the “Stand Your Ground” statute.

This is a breaking story. Stay with LawNewz.com and the LawNewz Network for additional details as they become available.