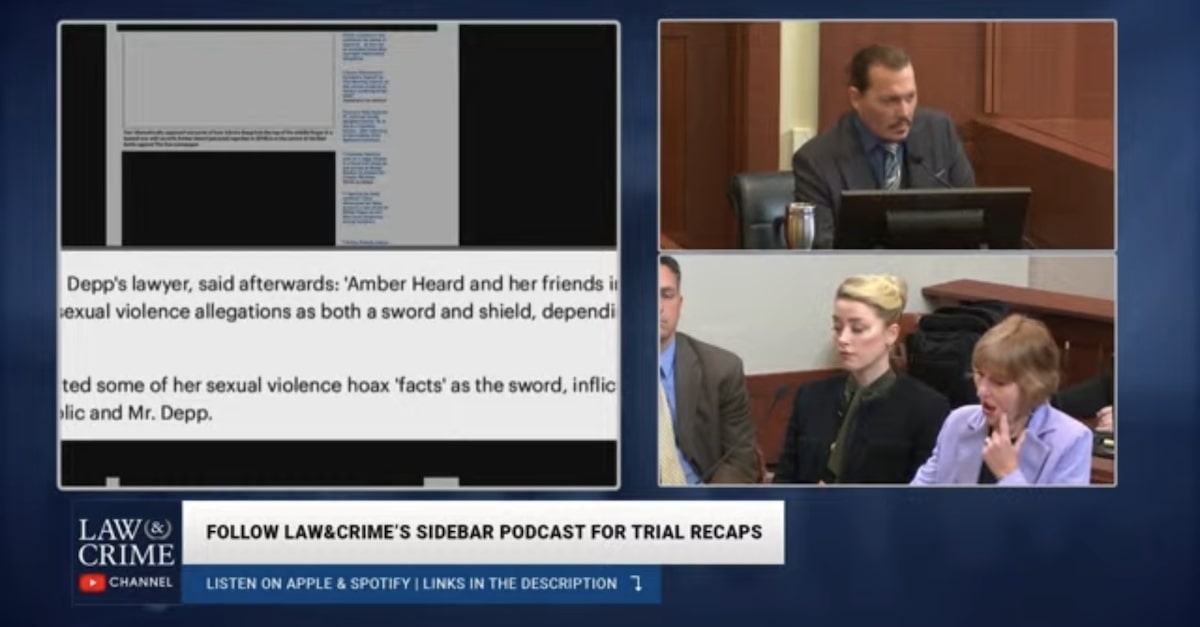 During his second stint on the witness stand inside a Virginia courthouse, Johnny Depp distanced himself on Wednesday from his attorney Adam Waldman’s remarks characterizing Amber Heard’s domestic abuse allegations as a “hoax.”

Though Depp vehemently denies Heard’s allegations that he physically and sexually abused her, he nevertheless disavowed Waldman’s colorful characterization of that denial in the Daily Mail in April 2020.

“Amber Heard and her friends in the media use fake sexual violence allegations as both a sword and shield, depending on their needs,” Waldman told the Mail. “They have selected some of her sexual violence hoax ‘facts’ as the sword, inflicting them on the public and Mr. Depp.”

Inspecting some of Waldman’s remarks, Depp commented: “It just seemed like word salad to me.”

That is not to say that Depp lacked for other choice words for Heard’s allegations.

“Insane,” Depp said. “It’s insane to hear heinous accusations of violence, sexual violence that she’s attributed to me, that she’s accused me of. I don’t think anyone enjoys having to split themselves open and tell the truth. But there are times that one has to because it’s simply gotten out of control. Horrible. Ridiculous. Humiliating. Ludicrous. Painful. Savage. Unimaginably brutal. Cruel and false. All false.”

She filed that case after Depp sued her over a 2018 Washington Post op-ed under her byline, where Heard described herself becoming a “public figure representing domestic abuse” two years earlier. That was when Heard first accused Depp of intimate partner violence when filing for a restraining order.

The editorial ran days before the release of Aquaman, in which Heard had her starring role that Depp claims he facilitated for her.

“I had a multi-film deal with Warner Bros,” Depp said. “So we’d be in business together. I’d been on films with them. She asked me if I could speak to them. I made a phone call.”

Since he was unnamed in the Post editorial, Depp’s lawsuit hinges upon the doctrine of defamation by implication.

In one of Heard’s most harrowing accounts, Depp allegedly went on a three-day bender fueled by consuming eight to 10 pills of MDMA in Australia in March 2015. Heard characterized the episode as a multiday assault, where Depp allegedly beat hear and sexually assaulted her with a liquor bottle.

Depp claims that Heard abused him during that episode by throwing a vodka bottle at him, which allegedly shattered and sliced off his finger.

Another incident with wildly diverging accounts involves the former couple’s honeymoon on the Orient Express in Southeast Asia in August 2015.

Heard said that Depp held her by the neck to assault and thought he would kill her, but Depp says that a photograph taken on the train shows a different story.

“I have a bit of a shiner,” Depp said, referring to what appears to be his black eye.

During a fight, Depp said: “I took a pretty good shot to the face.”

“This Is Not Easy for Any of Us”

Earlier on Wednesday, Depp’s supermodel ex-girlfriend Kate Moss testified to dispel rumors that he pushed her down the stairs at a posh resort in Jamaica. Moss actually slipped during a rainstorm, she testified.

“Ms. Heard took the story and turned it into a very ugly incident in her mind,” Depp said. “There was never a moment where I pushed Kate down any sort of stairs, yet she’s spewed this three times before.”

Heard testified that the rumor about Moss came to mind when Depp allegedly struck her sister Whitney Henriquez, who also testified about the incident. Depp sounded a rueful note about Heard’s sister.

“Whitney seemed to always get the sort of dirty end of the stick,” Depp said, describing Henriquez as a “punching bag” for Heard.

Depp and Heard met on the set of The Rum Diary in 2009, began dating some three years later. They married in 2015, and their divorce finalized in 2017.

On May 27, 2016, Heard filed for a restraining order, claiming domestic violence. It was Depp’s daughter’s birthday, and he says he was on a European tour at the time for Alice Through the Looking Glass, in which he starred as the Mad Hatter.

Since that time, Depp said, he’s been waiting to tell his story. He previously (and unsuccessfully) sued The Sun in the U.K. for defamation after the British tabloid ran an editorial calling him a “wife beater.” A U.K. judge found that allegation “substantially true.”

The Virginia courthouse provides a different forum: one allowing cameras that have captured an international audience of hundreds of millions, apparently captivated by the former celebrity couple’s sordid tales.

“No human being is perfect, certainly not,” Depp said. “None of us. But I have never in my life committed sexual battery, physical abuse, all of these outlandish, outrageous stories of me committing these things and living with it for six years and waiting to bring the truth out.”

“So this is not easy for any of us,” Depp continued. “I know about that. No matter what happens, I did get here. I did tell the truth, and I have spoken about what I’ve been carrying on my back, reluctantly, for six years.”

During cross-examination, Heard’s attorney Benjamin Rottenborn confronted Depp about some of his past statements.

“If I’m angry and got to lash out and hit someone, I am going to do it,” Rottenborn quoted Depp as saying. “Anger doesn’t pay rent. It’s gotta be evicted.”

He also quoted her saying of a woman named Molly in a text message that her “p***y is rightfully mine.”

“Should I not just bust in and remove its hinges tonight?” Depp allegedly wrote.

Depp denied sending the text, speculating someone may have sent it to his friend Stephen Deuters. Rottenborn landed another blow during cross-examination when he entered into evidence an image of a wall-mounted phone in their home in Australia. Heard claimed he smashed it to smithereens during a bender, but Depp’s legal team previously denied one was there.