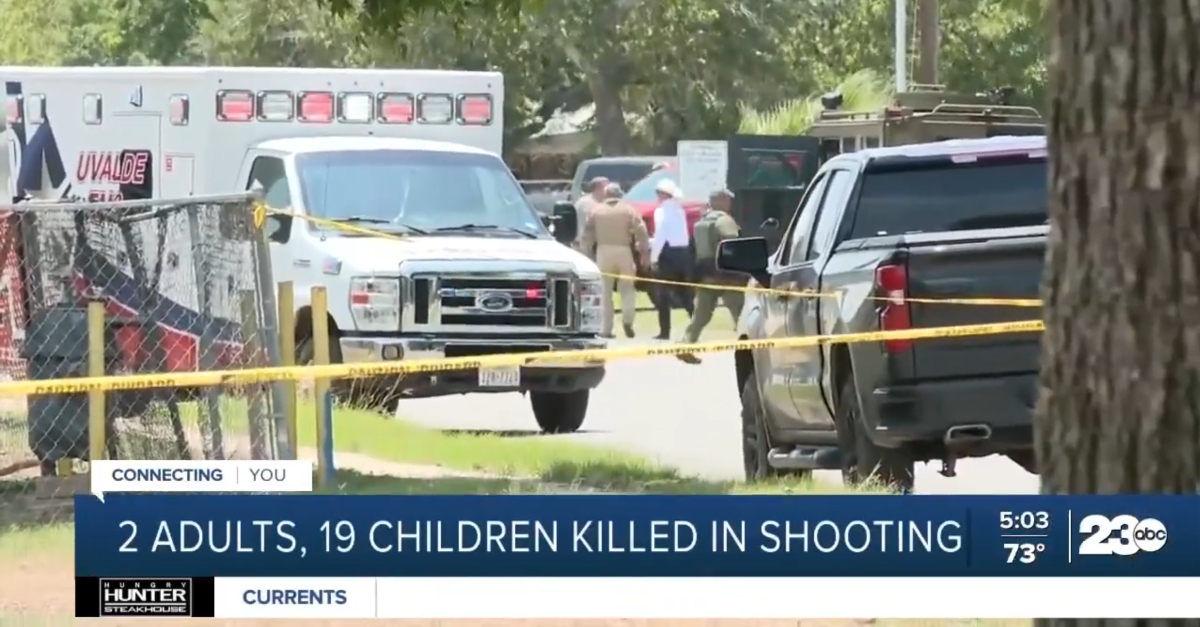 Loved ones have identified more than 10 children and the two teachers slain when an 18-year-old man opened fire at a Texas elementary school.

Gunman Salvador Rolando Ramos shot his grandmother in Uvalde, Texas, went to the nearby Robb Elementary School, abandoned his car, and attacked students and teachers, authorities have said. Authorities announced later Tuesday that 19 children and two adults were killed in the mass shooting.

All the victims were in the same fourth-grade classroom, Texas Department of Public Safety spokesperson Lt. Christopher Olivarez told outlets in an update Wednesday. Ramos locked the door and began shooting the children and teachers, he said.

“It just shows you the complete evil of the shooter,” Olivarez said.

Texas DPS now says the shooter had a tactical carrier which can be fitted with ballistic protection or it may not be fitted with that protection. It was not body armor they say, upon further review of the scene.

Law enforcement officers eventually killed Ramos. A border patrol agent reportedly ran towards the gunfire without backup and shot Ramos. The motive for the mass shooting remains under investigation. Ramos’ grandmother reportedly survived him shooting her.

Besides the shooter, the total death toll as of Wednesday is at 21.

“Rest in peace my sweet girl, you didn’t deserve this,” the cousin of Nevaeh Bravo, 10, reportedly wrote.

Another baby 💔 : Nevaeh Bravo— her cousin writing “Unfortunately my beautiful Nevaeh was one of the many victims from today’s tragedy… Rest in peace my sweet girl, you didn’t deserve this.” pic.twitter.com/jpjPLkL3oe

The sister of Makenna Lee Elrod confirmed the 10-year-old died.

Makenna Lee Elrod, 10. She was in 4th grade. pic.twitter.com/Lcm21tr6zY

Mireles is pictured below with Xavier Lopez, 10.

Some of the first victims identified by family in the #UvaldeMassacre: 4th grade teacher Eva Mireles, and 10-year-old Xavier Lopez— his mother had been with him at his award’s ceremony just a few hours before. 💔 pic.twitter.com/dXVhXrD0Sh

Jose Flores, pictured bottom right in the tweet below, was identified as a 4th grader. Irma Garcia is pictured in the top left.

“My little love is now flying high with the angels above,” said the father of 10-year-old Amerie Jo Garza.

His daughter was one of the 19 children killed in Tuesday’s school shooting in Uvalde, Texas. He said she had just turned 10 exactly two weeks ago. https://t.co/lgbe4mvp8D pic.twitter.com/3xp4N5fy7u

Family members reportedly identified Jailah Nicole Silguero, 11, and Jayce Carmelo Luevanos, 10. They appear to be cousins, according to the BBC.

Ellie Lugo’s heartbroken parents identified her as one of the victims.

Her father Steven Garcia said on Facebook: “Our Ellie was a doll and was the happiest ever. I was gonna DJ for her at her party like she wanted me too!!!”

Her mother Jennifer Lugo said “My heart is shatter to pieces” pic.twitter.com/FY8IkVn17k

Uziyah Garcia, 9, was another 4th grader.

💔 Family members confirm 9-year-old Uziyah Garcia is another child killed in the #UvaldeMassacre. He was also in the 4th grade in Mr. Reyes’ class. pic.twitter.com/fRqmTfRE56

The sister of Tess Marie Mata confirmed her death.

The sister of student Tess Marie Mata, confirms Tess was killed in #Uvalde shooting saying, “In my eyes you are not a victim but a survivor. I love you always and past forever baby sister, may your wings soar higher then you could ever dream…” pic.twitter.com/4sUB8eUvpQ

Annabelle Guadalupe Rodriguez, 10, is pictured in the bottom left in the tweet below. Rogelio Torres, 10, is in the top right.

💔 Cousins of 10-year-old Lexi Rubio confirm she was another one of the victims killed— a cousin tweeting “She was such a bright light in everyone’s life and was a badass ball player. You left this world way too soon ,and you will forever be missed.” #Uvalde pic.twitter.com/O4pLQQZhtT

Late Tuesday, the grandfather of Eliahana Cruz Torres confirmed she died in the #Uvalde shooting. 💔 pic.twitter.com/N2NGPsctqm

After initially looking for his then-missing daughter, Alithia’s father Ryan Ramirez appeared to confirm her death by changing his profile picture to an image of her photoshopped with angel wings.

Maite Yuleana Rodriguez, 10. She was in 4th grade. pic.twitter.com/jZXfkclsYG

Uvalde Memorial Hospital said on Tuesday that they received 13 children, with two transferred to a San Antonio hospital and another pending transfer. Two people who arrived were dead. They were not identified.

Texas Gov. Greg Abbott (R) has said that two police officers sustained non-life threatening wounds. U.S. Department of Homeland Security Assistant Secretary of Public Affairs Marsha Espinosa said Tuesday that U.S. Border Patrol agents responded to a law enforcement request for help. They faced gunfire from the barricaded Ramos, risking their lives to put themselves between the shooter and the children, she said.

“At least one Border Patrol Agent was wounded by the shooter during the exchange of gunfire,” she said. “On-and-off duty Border Patrol Agents arrived on the scene to assist with transferring students safely to their families and providing medical support.”