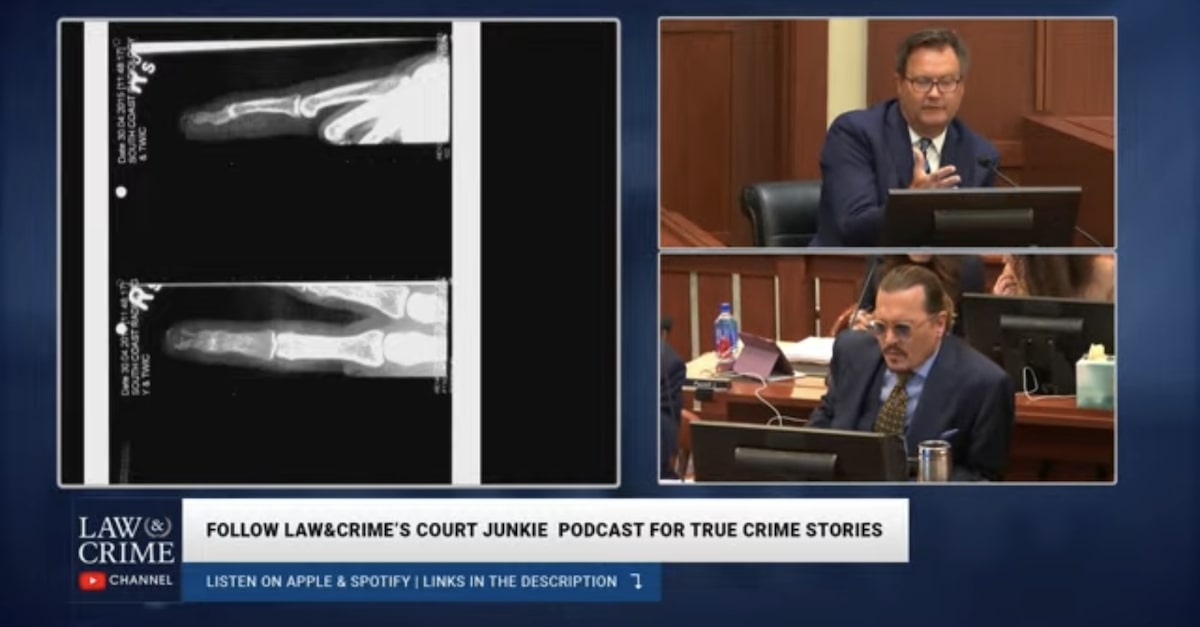 Dr. Richard Moore, an orthopedic surgeon, contradicted Johnny Depp’s testimony that he lost his fingertip after Amber Heard threw a vodka bottle at him.

An orthopedic surgeon contradicted Johnny Depp’s testimony that he lost his fingertip because his ex-wife Amber Heard threw a vodka bottle at him, which supposedly exploded into shards of sharp glass that caused the injury.

“Well, the medical data is inconclusive,” Richard Moore, an orthopedic surgeon called by Heard, testified on Monday. “It’s not consistent with what we see in the described injury pattern or in the clinical photographs.”

After stating that he operated “hundreds if not more” of finger injuries like Depp’s, Moore quickly became qualified as an expert by Heard’s legal team. Depp has claimed that Heard physically abused him, and his finger injury has been central to that allegation.

Depp and Heard present startlingly different accounts about what happened on March 2015 in Australia, where Depp had been on location for the fifth installment of Pirates of the Caribbean.

At the center of both of their stories is a liquor bottle. Heard claims that Depp raped her with one during a three-day, drug-fueled bender. Depp asserts that he was the one assaulted with a bottle, and he lost a fingertip when it shattered when he had his hand wrapped around the bar.

Moore, however, said he could rule out Depp’s account.

“Looking at the images, there’s really no significant injury of the dorsum of the finger and to create the type of injury with that type of a crush injury, we would anticipate both injury to the fingernail and other parts of the finger,” Moore said.

If the injury came from a bottle that shattered, Moore added, he would have expected to have seen other lacerations. None were recorded in the medical records, he noted.

Early in Moore’s cross-examination, Depp’s attorney Camille Vasquez brought out the doctor’s compensation by Heard’s defense team. Moore is being paid $1,000 an hour for his work and $5,000 per hour for his testimony.

Vasquez also asked a series of questions suggesting that Moore ignored evidence in Depp’s favor. Displaying photographs near the bar area, Vasquez noted that what appear to be drops of blood near the bar of the room.

Asked whether he saw that picture before, Moore responded: “I have not.”

"This is the time for me to ask you questions," Vasquez said. @LawCrimeNetwork pic.twitter.com/X2tGOfnvjD

Medical testimony about Depp’s finger has featured earlier in the trial as well.

David Kipper, a concierge doctor who directed the search for the missing fingertip, testified in a video deposition last month that Depp told an emergency room doctor that he sliced it off with a knife.

“There was a downstairs below the kitchen area,” Kipper said in a deposition played in court on April 18, expressing some uncertainty about exactly where the fingertip was found. “So this would be on the main floor. The kitchen was on the main floor as he went into the home.”

Debbie Lloyd, the nurse who worked with Kipper, testified that same day that she heard differing accounts of what caused Depp’s injury.

Monday’s court proceedings continue with more medical testimony from David Spiegel, a board-certified pyschiatrist. Heard’s defense team made a point to undermine the qualifications of Depp’s expert—a forensic psychologist who diagnosed the Aquaman actress with borderline personality disorder and histrionic personality disorder—by noting that she is not board-certified.

Taking his own turn a diagnosing the opposing party, Spiegel pegged Depp as a narcissist. During his contentious cross-examination, the psychiatrist stopped short of formally diagnosing Depp with narcissistic personality disorder, though Spiegel claimed to be “provisionally” diagnosing the actor with it. Spiegel was not allowed to analyze Depp, and he insisted that he did not violate the so-called Goldwater Rule, forbidding mental health professionals from rendering diagnoses of people they did not personally examine.

Heard’s attorney Elaine Charlson Bredehoft led Spiegel through a series of questions about the concept of “gaslighting” — in Spiegel’s words, the process of portraying an alleged victim as someone who is “losing it.”

Heard plans to call Depp as an adverse witness later on Monday.