‘I Slid Down’: Supermodel Kate Moss Debunks Rumor Repeated by Amber Heard That Johnny Depp Pushed Her Down the Stairs 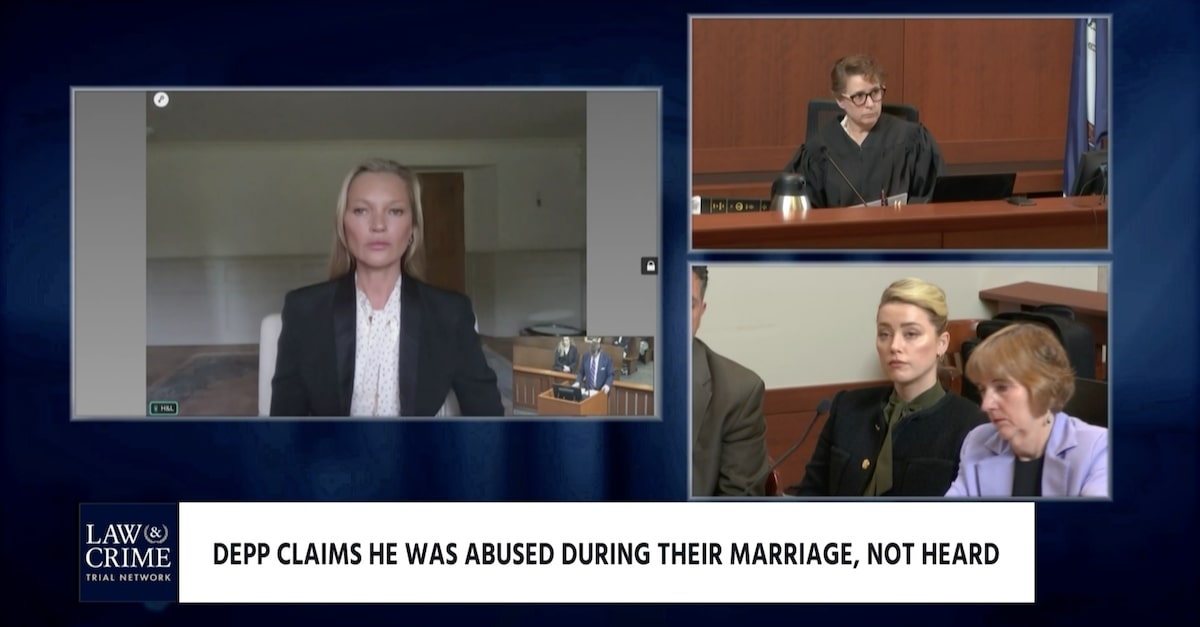 Kate Moss testifies that Johnny Depp never pushed her down the stairs, a rumor that Amber Heard repeated during her testimony.

Dispelling a longtime rumor repeated by Amber Heard during her sworn testimony, supermodel Kate Moss told a jury that Johnny Depp never pushed her down a staircase during their steamy relationship in the mid-1990s.

Moss fell down the stairs during a rainstorm at the GoldenEye luxury resort in Jamaica, she said.

“As I left the room, I slid down the stairs, and I hurt my back,” Moss recalled. “I screamed because I was in— because I didn’t know what had happened to me, and I was in pain. And he came running back to help me and carried me to my room and got me medical attention.”

GoldenEye boasts on its website being the one-time home of James Bond author Ian Fleming.

Depp and Moss’s torrid relationship in the 1990s filled the tabloid press with plenty of fodder. They reportedly had sex in every room of the Chateau Marmont, a Sunset Boulevard hotel that has been populated by celebrities for nearly a century.

According to a New York Post profile of the former couple, their “passionate rows” were also “legendary.” Depp reportedly trashed a presidential suite at the Upper East Side’s Mark Hotel after an alleged fight. A criminal court dismissed the charge against Depp, who paid The Mark more than $2,000 in damages, the paper reported.

Such gossip apparently left an impression on Heard, who testified that Moss came to mind after Depp allegedly struck Heard’s sister Whitney Henriquez on the stairs of their Los Angeles house in March 2018.

When Heard first said that, Depp’s attorney Benjamin Chew gave a fist pump to the legal team, apparently believing that the Aquaman actress had opened the door to Moss’s testimony. Depp and Moss remained close friends, and she has remained supportive of the 21 Jump Street actor as Heard painted him as a domestic abuser.

In the end, Heard’s remark only opened the proverbial door a crack. Moss testified via video link after Depp and Heard’s attorneys huddled with the judge over the scope of her examination. Judge Penney Azcarate kept that scope narrowly relegated to the controversy over the staircase.

“No, he never pushed me, kicked me or threw me down any stairs,” Moss said, categorically.

Moss said she has never testified in any court proceeding, but asked why she chose to testify in Depp’s case, Heard’s counsel sprang into action with an objection. The supermodel’s stint on the hot seat ended shortly after that.

Even a source close to Heard described the brief testimony as the last word on Depp’s relationship with Moss.

“So Johnny Depp didn’t abuse Kate Moss,” the source said. “That makes him 1 for 2 in the abuse column.”

“But, to date, he’s 0 for 1 in the courtroom on the central issue in this case back when he lost the same exact case in England,” the source continued. “And when the jury deliberates over the singular issue in this case — whether Amber Heard can exercise her right of Freedom of Speech — he’ll be 0 for 2, no matter how much his lawyers try to distract and divert the jury’s attention.”

In the United Kingdom, a judge ruled in favor of The Sun after that British tabloid published an editorial calling Depp a “wife beater,” a description the court found “substantially true.” Depp sued Heard in a court in Fairfax County, Va., the year after her byline appeared on a 2018 Washington Post stating that she became “a public figure representing domestic abuse.” Heard countersued after Depp’s attorney Adam Waldman called her allegations a “hoax.”