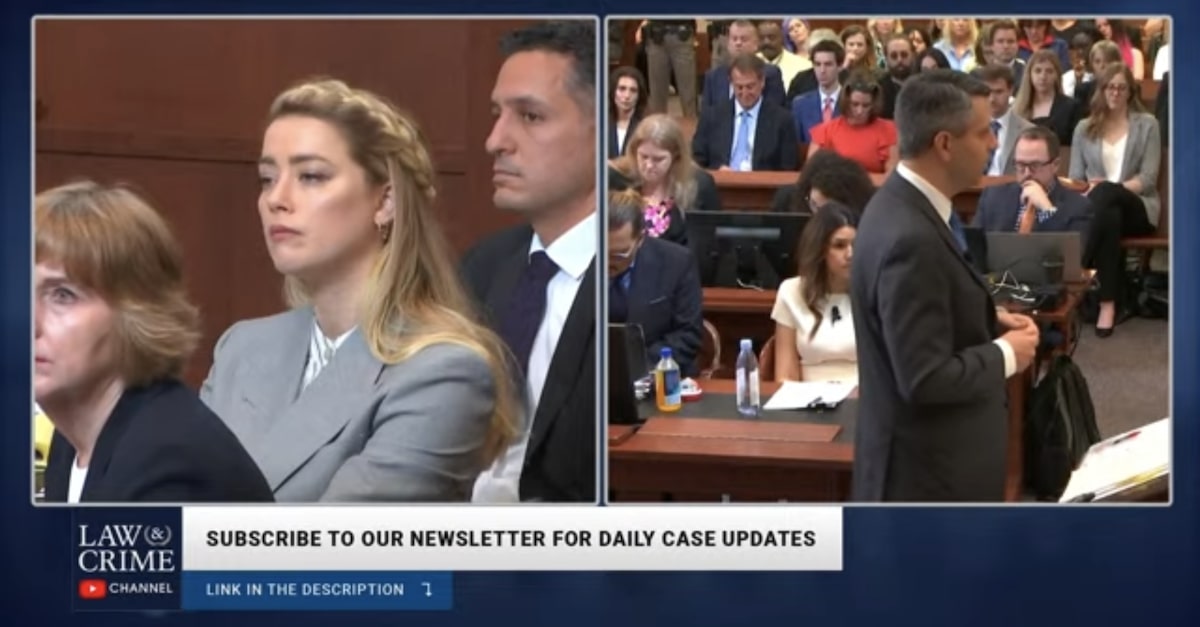 Delivering his closing arguments to jurors in a Virginia courthouse, Amber Heard’s attorney urged them to consider the ramifications this case has on domestic abuse survivors and the First Amendment.

“And if you finally decide that enough is enough, you’ve had enough of the fear, enough of the pain, and you have to leave to save yourself: You’re a gold digger. That is the message that Mr. Depp is asking you to send.”

“Protected by the First Amendment”

On Dec. 18, 2018, Heard’s byline appeared on a Washington Post op-ed stating that she became a “public figure representing domestic abuse” two years earlier. The editorial did not mention Depp by name, and it mostly focused on political themes related to the #MeToo movement.

The lawyer urged the jury to parse Heard’s statements about the public figure she came to represent closely.

“You can decide this case without ever wading into any of the allegations, the facts, the evidence that you’ve heard about the heinous abuse of Ms. Heard suffered at the hands of Mr. Depp,” Rottenborn said. “You can decide that by determining that those statements are true. They’re protected by the First Amendment.”

Depp sued under the doctrine of defamation by implication, claiming that it unmistakably alluded to Heard seeking a restraining order against him in 2016.

Heard countersued after Depp’s attorney Adam Waldman referred to her claims as “fake,” “fraudulent” and a “hoax,” in what she described as a vast legal, public relations and social media smear campaign. Both parties have two sets of attorneys pursuing and defending against the claims against them.

“Now, the obviously the defamatory meaning of that is that Amber was creating an abuse ‘hoax’—but there is no abuse ‘hoax,'” Bredehoft said.

What actually transpired, according to Heard’s lawyers, was Depp’s promise campaign of “total global humiliation” against her.

Though the lawyer contends the jury doesn’t have to wade into the abuse allegations, Rottenborn added that Depp must succeed in disproving more than a dozen alleged incidents.

“If he abused her one time, Amber wins,” Rottenborn declared.

Then, the lawyer corrected himself: “Actually, if he fails to prove that he never abused her one time, Amber wins.”

In 2020, a U.K. judge credited 12 of 14 domestic abuse allegations against Depp, after the Pirates of the Caribbean star sued The Sun for publishing an editorial calling him a “wife beater.” The judge called the statement “substantially true.”

The Virginia jury has been informed of the existence of that litigation—but not its outcome.

Rottenborn argued that Depp’s burden is to prove no form of abuse: verbal, emotional, physical or sexual, and he said that Depp’s texts alone make that an easy case.

Depp was quoted in one text, stating: “I hope Amber’s rotting corpse is decomposing in the fucking trunk of a Honda Civic.” In another series of messages, he declared “Let’s burn Amber.”

“These words are a window into the heart and mind of America’s favorite pirate,” Rottenborn said. “This is the real Johnny Depp.”

The actor claimed that he was riffing on the beloved British comedy Monty Python and the Holy Grail. Heard’s supporters frequently accuse Depp of trying to discredit her by trying to hold her up to the image of the “perfect victim.”

Rottenborn said his client never purported to be flawless.

“No matter how honest you are about your own imperfections and your own shortcomings in a relationship, you need to be perfect in order for people to believe you,” he said.

Depp’s attorney Camille Vasquez argued earlier on Friday morning that the jury should apply a holistic view of the case and scrutinize Heard’s most alarming allegation under the cold light of the evidence.

“You can’t pick and choose which of these wild allegations to believe and which ones to disregard,” Vasquez said. “You either believe all of it or none of it. Either Mr. Depp sexually assaulted her with a bottle in Australia, or Ms. Heard got up on that stand in front of all of you and made up that horrific tale of abuse.”

If the jury finds liability, they will need to set a damages award. Depp is requesting $50 million, and Heard wants $100 million. Depp has argued that, if Heard were to prevail, she should not get a bounty because she vastly overstated her supposed trajectory as the next Gal Gadot. The executive producer of Aquaman, which premiered days after the Post op-ed, testified that Heard lacked chemistry with her co-star Jason Mamoa. Bredehoft blamed the alleged smear campaign on Heard’s star being “completely extinguished.”

“It has destroyed her life,” Bradehoft said. “It has consumed her.”

Though Heard asked for double Depp’s requested damages, Bradehoft asserted that her client doesn’t expect that full amount, but she the jury to be “fair and reasonable.” Depp’s attorneys will have rebuttal summations after the lunch recess.