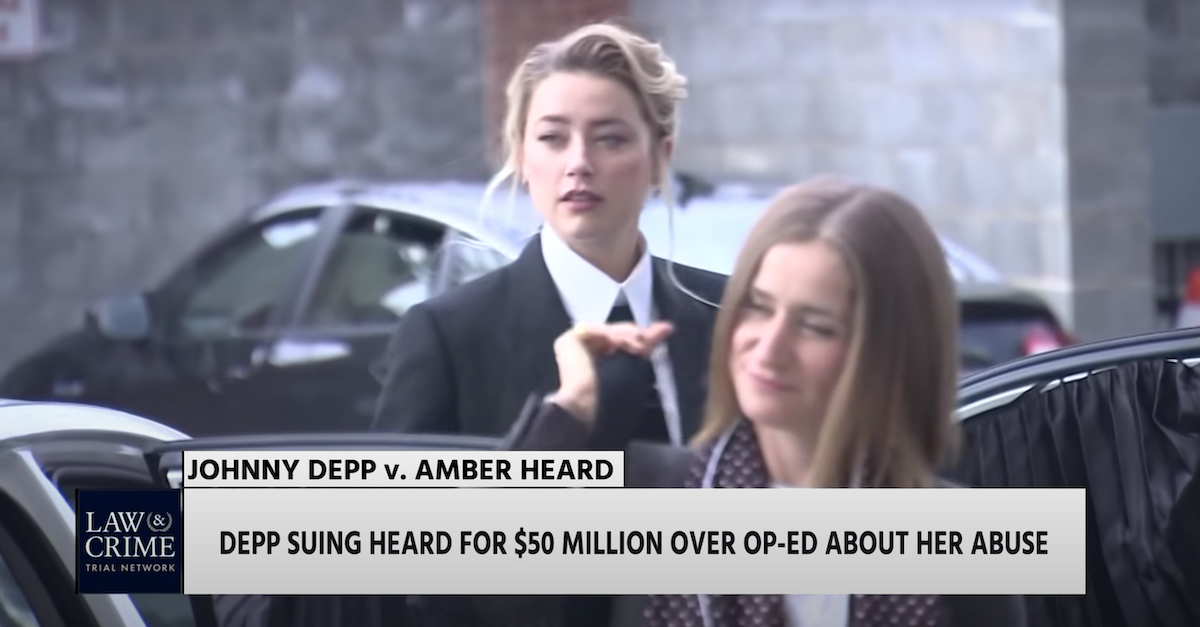 Amber Heard (rear) and Eve Barlow (front) acknowledged one another briefly before walking into court.

A supporter of Amber Heard has been booted out of a Virginia courtroom for the remainder of a defamation trial between Heard and Johnny Depp after a judge agreed the supporter had been tweeting and texting during the proceeding.  But the supporter also allegedly misrepresented information she provided to Heard’s lawyers that — in part — led to a witness for Depp being excused (and her testimony stricken) from the record. That’s according to a source familiar with the court order.

Judge Penny Azcarate issued the order Friday afternoon to “exclude” Eve Barlow from the courtroom for the “pendency of trial.”

Barlow identifies herself as “The Interrupter” and as a “Journalist” on Twitter.  On Thursday, Barlow interrupted the testimony of Gina Deuters, a longtime friend to Johnny Depp, by passing her cell phone to Heard’s lawyer, Ben Rottenborn.

Lawyers for Heard and Depp then entered a brief sidebar with Judge Azcarate. The discussion led the judge to ask Deuters, the Depp friend and witness, whether she had watched testimony from the trial. Deuters acknowledged she had seen clips online; Judge Azcarate excused her and told the jurors to disregard her testimony.

The sidebar was caught by the Law&Crime Network’s cameras; it is cued up in this video:

Someone familiar with the court order told the Law&Crime Network that Depp’s attorneys asked the judge to permanently ban Barlow from the courtroom because she had been tweeting and texting from the facility in violation of an earlier order. That earlier order barred everyone from using personal electronic devices in the courtroom — with the exception of members of Depp’s and Heard’s respective legal teams.

It came to light Friday that an Instagram post that Barlow showed to Rottenborn was from January 2021 — when Deuters posted about Depp’s separate libel case against The Sun.

A person familiar with the court order said Depp’s attorneys told Judge Azcarate that, as an officer of the court, Rottenborn misrepresented the information to Judge Azcarate as a post from the current trial — which began Monday, April 11.

Chew also told Judge Azcarate that Barlow had been passing notes back and forth to Heard throughout testimony. Chew called what Barlow had done “outrageous” and said Depp’s team was trying to play by the rules.

A person familiar with the court order to exclude Barlow said Judge Azcarate was not pleased that Barlow had violated her previous order and granted Depp’s request.

Barlow has routinely arrived in the same car as Heard throughout the trial. On Thursday, Law&Crime’s Angenette Levy was sitting in the courtroom during Deuters’ testimony and watched as Barlow and a woman with her were told to move to benches in the back of the courtroom. The pair had been sitting on the front bench reserved for Heard’s legal team.

Depp’s family members and supporters were also told to move to the rear of the courtroom from the first bench after Deuters was excused.

A person familiar with the court order said Barlow had repeatedly tweeted during the trial from the courtroom by opining on the opening statement of Depp lawyer Camille Vasquez and making other comments. Depp’s team has also taken issue with Heard posting a statement on Instagram right before the start of the trial.

Gina Deuters had offered testimony that could have been damaging to Amber Heard.

Barlow has not yet responded to a tweet requesting comment on her exclusion from the trial — or to the claim that she caused Heard’s team to misrepresent information about Deuters’ Instagram post to the court.

Depp’s legal team did not provide a comment to Law&Crime when asked about Barlow in person.

When asked about the incident in person on Thursday, Rottenborn said he could not discuss the matter.  He also did not immediately respond to an email from Law&Crime on Saturday.

Deuters said she was “too emotional” to discuss the matter when approached in person by Law&Crime.

If any responses are issued by any of the key players, this report will be updated.

Depp is suing Heard for defamation over a Washington Post op-ed Heard wrote in December 2018 which claimed she was a public figure representing domestic abuse. Depp claims Heard was the abuser in their relationship. Meanwhile, Heard is countersuing for $100 million. She claims Depp defamed her when his lawyer called her claims a hoax.

The Law&Crime Network’s coverage of the situation is embedded below:

The judge’s order to exclude Barlow is here:

[Featured image via the Law&Crime Network.]