Amber Heard Paid Less Than Half of ACLU Donation: Testimony

Amber Heard Paid Less Than Half of Pledged Donation to the ACLU, Whose Lawyers Helped Write Op-Ed at Center of Johnny Depp Case: Testimony 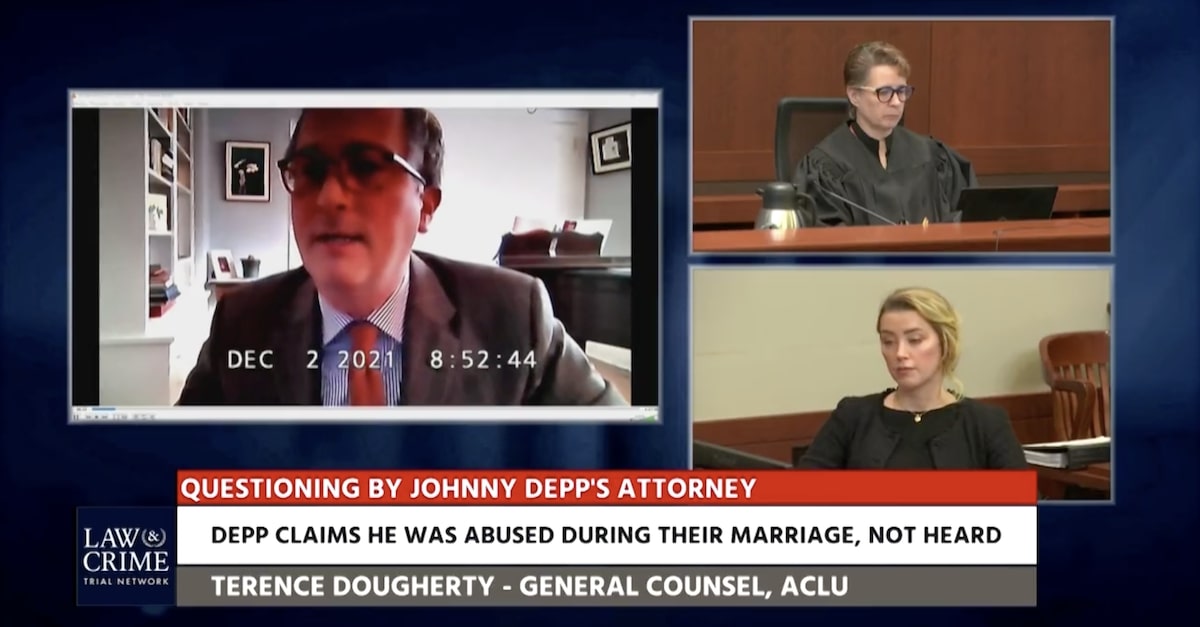 After her acrimonious divorce with Johnny Depp finalized in 2017, Amber Heard played down the $7 million payout that she received by pledging to donate it to two charities: the American Civil Liberties Union and Children’s Hospital Los Angeles.

The promised philanthropy burnished the credibility of Heard’s domestic abuse claims in a U.K. court and the court of public opinion.

The ACLU’s general counsel Terence Dougherty complicated that portrait in a videotaped deposition played in court on Thursday, where he estimated that Heard donated only $1.3 million of the $3.5 million that she pledged.

“We reached out to Ms. Heard starting in 2019 for the next installment of her giving, and we learned that she was having financial difficulties,” Dougherty said.

Dougherty testified that only $350,000 of that amount was donated under Heard’s name. Depp made a $100,000 contribution in Heard’s name, and a $500,000 payment from a Vanguard Donor Advised-Fund from Tesla co-founder Elon Musk, whom Heard dated following her divorce, according to the testimony.

Beyond financial accounting, Dougherty gave a behind-the-scenes view of the drafting of an editorial that sparked Depp’s $50 million defamation lawsuit against Heard, which is currently playing out inside a courthouse in Fairfax County, Va.

On Dec. 18, 2018, Heard published a Washington Post op-ed titled “I spoke up against sexual violence — and faced our culture’s wrath. That has to change.” Her byline identified her as the ACLU’s ambassador on women’s rights.

Undisclosed in the op-ed’s byline, the draft had a co-writer and a bevy of lawyers striking out any explicit reference to Heard’s former husband.

Asked about the ACLU lawyers scrutinizing the draft, Dougherty said: “I think there were four.”

The piece did not mention Depp by name, and the ACLU’s lawyer testified that this was by design.

Depp’s lawyers claim that his name was not necessary because the piece referred obliquely to their well-publicized and tawdry legal proceedings in 2016, when Heard filed for a restraining order.

An email pitching the piece to the Post’s op-ed editor Michael Larabee suggests that those involved in the op-ed knew the subtext was clear.

“Hey Michael, [I’m] wondering if we might interest you in a piece by Amber Heard (who, as you may recall, was beaten up during her brief marriage to Johnny Depp), on what the incoming Congress can to do to help protect women in similar situations,” the email said, with the parenthetical in original.

Dougherty agreed that sizing down references from her marriage and divorce to Depp made it more impactful. One of the co-writers of the op-ed, Robin Shulman, opined that the legal team had “neutered” references to Heard’s marriage and allegations of domestic violence.

Despite Shulman’s impression, Depp testified that the op-ed turned him into a monster in the public’s eye, colorfully describing his transformation from a “Cinderella” figure to a “Quasimodo.”

During his testimony, Dougherty reviewed communications showing the chatter about the drafting, placement, and publication editorial. He said that both Heard and the ACLU agreed to time the publication on the then-upcoming release of Aquaman. Premiering days after the op-ed’s publication, Aquaman grossed more than $1 billion to become the fifth highest-grossing film in 2018.

For Heard, stardom did stave off financial difficulties, and Dougherty said he learned about them in 2019. Heard still received a legal benefit from her pledged donation in U.K. court proceedings, in which Depp had sued The Sun—a British tabloid—over a piece calling him a “wife-beater.”

In a 129-page ruling, a U.K. judge ratified most of Heard’s domestic abuse allegations and brushed off Depp’s implication that she was a “gold-digger,” citing the Aquaman star’s charitable giving.

“I recognise that there were other elements to the divorce settlement as well, but her donation of the $7 million to charity is hardly the act one would expect of a gold-digger,” the ruling stated.

When Reuters performed fact-checking on the donations, the press inquiry apparently provoked anxiety inside the ACLU. A senior communications director grappling with the language ducked the payment issue by telling a reporter that Heard “pledged her full settlement to charity,” studiously avoiding the use of the word “donated.”

“Yes, I think that’s safer,” an email discussing the language read. “I had nightmares about this last night.”

Heard insists that the pledge was meant to be a 10-year commitment. She has played down the payments from ex-boyfriend Musk, now the world’s richest man, as a common way to fulfill a pledge—that is, through third-party benefactors.

Dougherty said that he did not expect that Heard’s donations have ended.

“I am not aware of any indication that Ms Heard has decided to no longer pay additional amounts to the ACLU,” he said.