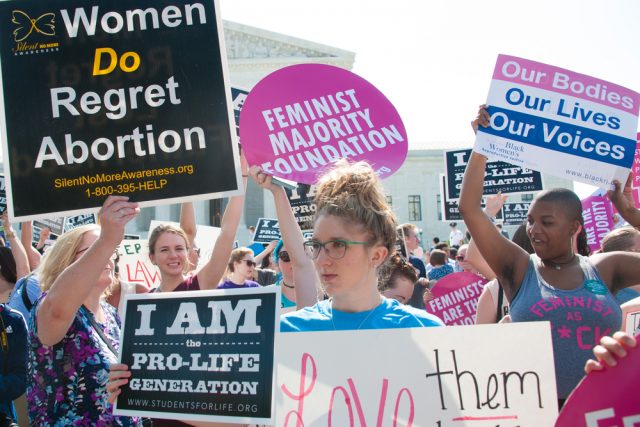 The Trump administration’s Department of Justice is using every method at its disposal to stop a teenager from having an abortion.

That much is known. It has been in the news for the past couple weeks. A young woman referred to as Jane Doe is presently being detained by federal agents because she entered the country in violation of outmoded U.S. immigration laws. Jane Doe wants to have an abortion, but the government doesn’t want her to do that. So she sued–or rather, was added to an existing lawsuit filed by the American Civil Liberties Union (“ACLU”).

That lawsuit is existing because the Trump administration frequently interferes with the rights of young woman in their custody to access medical care. In a statement about Jane Doe’s case, the ACLU notes:

Jane Doe is an unaccompanied immigrant minor who is currently residing in a government-funded shelter in Texas. Unaccompanied immigrant minors leave their home countries, often fleeing abuse, torture, and violence, and come to the United States without their parents. Once in custody, the federal government provides day-to-day care for these young people until they are reunified with family here in the U.S., seek asylum, or are deported. The government — and government-funded shelters — are required by law to provide minors with access to the full range of medical care.

The ACLU is correct in their understanding of the law. But the Trump administration is vehemently pushing for Doe to remain pregnant because of a change in administrative policies. Under Obama administration rules, there was no government review of undocumented minor requests for abortion services unless they were also requesting government funds to obtain such an abortion. In an effort to appeal to social conservatives, however, the Department of Health and Human Services has been unlawfully interfering with mandated medical access since sometime after Trump took office. According to a report in Politico:

For the last seven months, the Health and Human Services Department has intervened to prevent abortions sought by girls at federally funded shelters, even in cases of rape and incest and when the teen had a way to pay for the procedure. The agency has instead forced minors to visit crisis pregnancy centers, religiously affiliated groups that counsel women against having abortions, according to documents obtained by POLITICO…and those familiar with the agency’s policy.

Jane Doe’s request is becoming something of a marquee case for the Trump administration to play up its pro-life bona fides. Think Terri Schiavo 2.0. For those unfamiliar, Terri Schiavo was a woman in an irreversible vegetative state due to brain damage. After years of less-than-life in such a state, her husband petitioned a court to remove her feeding tube in accordance with Florida law. Schiavo’s parents intervened and eventually the double-ham-fisted George W. Bush administration–with an assist from Congressional Republicans–intervened to morph the Schiavo family drama into a national political scandal and discussion on right-to-die issues, pro-life issues, and ultimately, federal government overreach. Terri Schiavo was eventually allowed to die with something not entirely unlike dignity after social conservatives–and Schiavo’s parents–lost multiple court battles.

The Trump administration apparently sees something obfuscatory in the present Jane Doe case. A Terri Schiavo redux offers Trump the opportunity to gin up headlines that distract from his treatment of military families while simultaneously and cynically offering some plated resentment against immigrants and a gaudy flexing of pro-life credentials. Too bad it’s all very illegal.

The young woman here isn’t requesting government funds and has already had a judge in Texas sign off on her request. But the Trump administration doesn’t care. There’s a change in the way things happen and the administration is determined to force pregnancy on an undocumented immigrant child in order to score cheap political points against someone they deemed an easy mark.

First the administration argued that since Jane Doe entered the country illegally, she wasn’t entitled to Constitutional rights. That argument was laughed out the courtroom. Rather, the judge who heard it was shocked.

Just yesterday, U.S. District Judge Tanya Chutkan issued an order demanding that the government “promptly and without delay” allow the 17-year-old her Constitutional right to an abortion. That seemed to settle the matter–until today when the Trump administration filed an emergency motion for a stay of Chutkan’s decision.

The administration’s major argument is summed up in the briefing filed with the D.C. Court of Appeals this morning. Their heading reads: “The Government Is Likely to Succeed on the Merits Because Refusal to Facilitate an Abortion Does Not Constitute an Undue Burden in Violation of the Fifth Amendment.”

Under U.S. law as it relates to abortion, the major test for government action seeking to limit a woman’s bodily autonomy is whether such government action constitutes an “undue burden.” This language and test are derived from the Supreme Court case of Planned Parenthood v. Casey. In that case, Justice Sandra Day O’Connor‘s previously rejected standard for adjudicating the legality of abortion restrictions–the undue burden standard–replaced the previous standard of strict scrutiny from the more famous case of Roe v. Wade.

Planned Parenthood v. Casey–though brought to court by the women’s health organization which provides half of the decision’s name–was a victory for those who advocate against female bodily autonomy and a loss for women’s abortion rights, generally. It also, as mentioned, gave American lawyers a new set of legalese. The Legal Information Institute defines “undue burden” thusly:

In the field of reproductive rights, having the purpose or effect of placing a substantial obstacle in the path of a woman seeking an abortion of a fetus that is not yet viable. Laws that impose an undue burden on a fundamental right are unconstitutional under current Supreme Court cases.

The Trump administration’s attorneys would do well to read up on the standard described above, because they’re acting like they never even encountered the undue burden language in law school. Their argument reads as follows:

The government’s refusal to facilitate Ms. Doe in obtaining an abortion places no obstacle in her path, much less a significant one, as is required to constitute an undue burden. The government is merely refusing to exercise its custodial responsibilities over unaccompanied minors by taking affirmative steps to proactively assist or enable her in such an endeavor, consistent with its legitimate interest in promoting fetal life and childbirth over abortion.

This argument is ridiculous on its face. Jane Doe is currently held under lock-and-key by the Office of Refugee Resettlement. There’s nowhere else for her to go unless and until the government takes her there. She’s got the money to pay for the abortion and has fully satisfied the stringent anti-abortion provisions of Texas law. Federal law mandates she receive medical access. The government has a duty to provide such access or let her go.

Instead, the government is playing to the self-declared and sanctimonious angels of the right-to-life movement by asserting a government interest in fetal life and childbirth–which is absolutely nonsensical in and of itself–but, tellingly, only offered this pretextual language to their legal quiver after their aforementioned anti-immigrant argument about Constitutional rights failed.

To state it plainly: This administration has no valid interest–legal or otherwise–in fetal life and childbirth. Rather, this administration is intent on showcasing the full powers of big government controlled by right-wing conservatives. They’re doing this not out of any appreciation for the law, but in order to initiate a Pavlovian response–among MAGA stans–and their fellow travelers–who smack their lips gleefully as immigrants are bashed and loose women are put in their place.

It’s a circus, sure, but the victims here are real. The legal argument being advanced by the Trump administration is essentially an assertion that the government has full powers of bodily control and coercion over young women and any undocumented immigrants unfortunate enough to fall into the hands of federal authorities. This argument will fail.