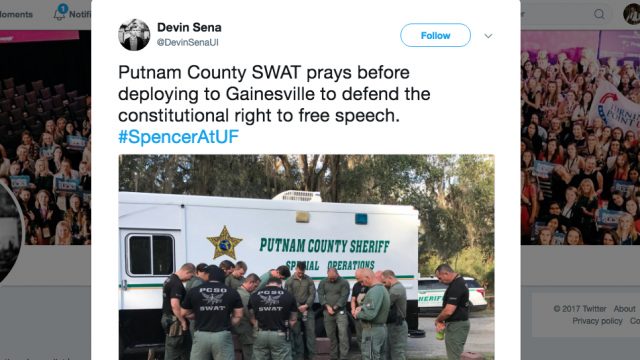 SWAT teams across Florida have been deployed to protect white nationalist Richard Spencer as he addressed the University of Florida today.

Spencer had originally scheduled his speech for September 12, 2017. The University of Florida rejected that application–submitted under the aegis of Spencer’s white nationalist organization, the National Policy Institute–citing safety concerns.

The University of Florida issued a press release at the time, explaining their decision, which reads, in part:

In the wake of weekend violence in Charlottesville, Va., and amid serious concerns for campus safety, the University of Florida announced today it will deny the National Policy Institute’s request to rent space for a Sept. 12 appearance by its president, white nationalist Richard Spencer. UF leadership made the decision after talking with campus, community, state and federal law enforcement officials and assessing the potential risk for violence following clashes Saturday in Charlottesville between white nationalists and counter-protestors.

Included with that press release was a statement from University of Florida President Kent Fuchs. He wrote:

I find the racist rhetoric of Richard Spencer and white nationalism repugnant and counter to everything the university and this nation stands for. That said, the First Amendment does not require a public institution to risk imminent violence to students and others. The likelihood of violence and potential injury – not the words or ideas – has caused us to take this action. Denying this request for university space is the safest and most responsible decision we can make.

After having his application for campus space rejected, Spencer enlisted the services of First Amendment attorney Gary Edinger. Edinger said he disagreed with Spencer’s political views but found he had a valid First Amendment claim.

Edinger issued University of Florida officials an ultimatum on behalf of Cameron Padgett, the event organizer: allow Spencer his constitutional right to the public facilities on campus, or be taken to federal court. The university initially made noises about standing their ground, but quickly capitulated.

A Q&A published by the university notes that the administration’s position on Spencer, his organization and their political opinions has not changed, but that they were essentially forced into holding the event due to the First Amendment. The Q&A reads:

As a state entity, UF must allow the free expression of speech. We cannot prohibit groups or individuals from speaking in our public forums except for limited exceptions, which include safety and security. Our decision to disallow the September event was based on specific threats and a date that fell soon after the Charlottesville event. Allowing Spencer to speak in October provided additional time to make significant security arrangements.

The Q&A also notes that Spencer and his group paid $10,564 for the use of the venue while noting that in excess of $500,000 has been spent by the university to secure additional security needed for the event. A 1992 Supreme Court decision mandates that the state–in this case the University of Florida–must cough up the extra funds in the event that the speech in question might be so upsetting to others that it necessitates high-priced security costs. That case is Forsyth County v. Nationalist Movement.

In response to Spencer’s speech, Florida Governor Rick Scott controversially subjected Florida to a State of Emergency–at the request of Alachua County Sheriff Sadie Darnell. That State of Emergency is the reason for the mobilization of multiple SWAT teams from across the state. Why the SWAT members in the picture above are praying, however, is anyone’s guess.