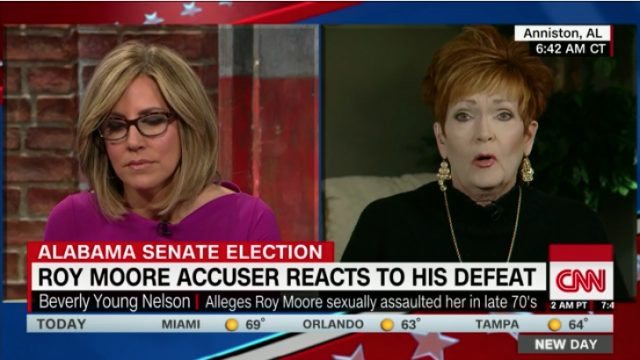 During a “victory lap” appearance on CNN, attorney Gloria Allred suggested that she wasn’t quite done with Roy Moore or anyone else who cast doubt on the sexual assault claims made by her client, Beverly Young Nelson.

In the offing appears to be a defamation case against Moore, who called Nelson a liar after she admitted to making “notes” underneath Moore’s signature in her high school yearbook. But if Gloria Allred is seriously thinking with the killer instinct necessary to fully represent her client here, she should also consider defamation suits against Fox News, Breitbart and The Gateway Pundit.

The problem here for Moore is that Nelson never once claimed he wrote the date or location (collectively, the “notes”) underneath Moore’s signature. The initial Allred-Nelson press conference was a tearful affair with lots of drama, discussion and words from the mouth of an attorney. As legal scholar Jonathan Turley has noted, Allred’s bumbling here certainly didn’t do Nelson any favors on the credibility front and actually set her client up for being castigated in the rightwing press.

Still, the fact remains that Nelson may not have lied and that Moore called her a liar.

Immediately after the embarrassing “notes” admission, Fox News ran an article with the following headline:

The author(s) of the original Fox News article seemed to understand they were padding the facts; the story was initially published without attribution. That story–and Fox News‘ erroneous and misleading take on it–quickly rose to the rafters of rightwing media sharing-and-consumption and easily trended to the top of Fox News‘ own website.

(Here’s a link to the archived version of Fox News’ original story and headline.)

Nearly two hours later, Fox finally made the decision to correct their mistake in full. The headline was altered–after 26 minutes of online traction–to read, “Roy Moore accuser admits she wrote part of yearbook inscription attributed to Alabama Senate candidate.” The full story was corrected after roughly an hour and 39 minutes.

All references to “forgery” were removed from the article; an editor’s note was added to the bottom of the story; and one of the authors–Alex Pappas–was forced to cop to their authorship–probably in an attempt to assign blame to an underling. The editor’s note reads:

An update to this story reflects that Beverly Young Nelson admits writing what ABC News characterized as “notes” beneath what she says is Roy Moore’s signature, and that the only notes below the signature are the date and location. Furthermore, the headline on story now specifies that Nelson admits to writing part of the inscription herself, rather than forging part of it.

Allred should sue for defamation by libel and claim that Fox News, Breitbart and The Gateway Pundit intentionally misrepresented her client, Beverly Young Nelson, as both a liar and a criminal.

Lying about sexual assault (and the particulars thereof) is likely to be deemed defamation per se in Alabama. And the same holds for lying about someone’s commission of a crime.

(Defamation per se is a form of libel so egregious that simply publishing the defamatory statement will typically rise to the level of a civil infraction absent the four traditional elements necessary for a winning defamation case. And, notably, Alabama’s defamation statute is much less strenuous than the usual test at common law.)

In Alabama, forgery of the sort alleged by the potential defendants above is a Class A misdemeanor. Each of the above-listed media outlets specifically accused Nelson of the crime of forgery. Furthermore, each of the said outlets–and Roy Moore–imputed falsity to Nelson and her story in general.

False accusations of criminality rising to the level of defamation can, of course, be mitigated by retractions. Fox News issued one–again, hours later, but neither Breitbart nor The Gateway Pundit have yet to correct their stories and likely will not do so.

Fox News isn’t entirely in the clear here, however, because it took them over an hour to retract their apparently false story. Allred could claim this retraction was intentionally slow-walked–well after the damage to her client was already done. This fact would substantially factor into any defamation lawsuit due to the nature of the internet and social media sharing-and-consumption habits.

Under recent Alabama case law, Nelson could quite plausibly win damages for mental anguish, punitive damages, and damages for loss of reputation.

Finally, one last note on Alabama’s somewhat quirky defamation laws: if any of the above-mentioned would-be defendants were to issue a retraction and provide Nelson a substantial sum of money, then they’d probably be in the clear. But that would entail a certain admission of fault. We’ll see about that.

Editor’s note: this story has been updated to provide and clarify the exact timeline of Fox News‘ retraction.