‘Meritless and Frivolous’: Kyle Rittenhouse Does Not Have a Defamation Case Against Joe Biden 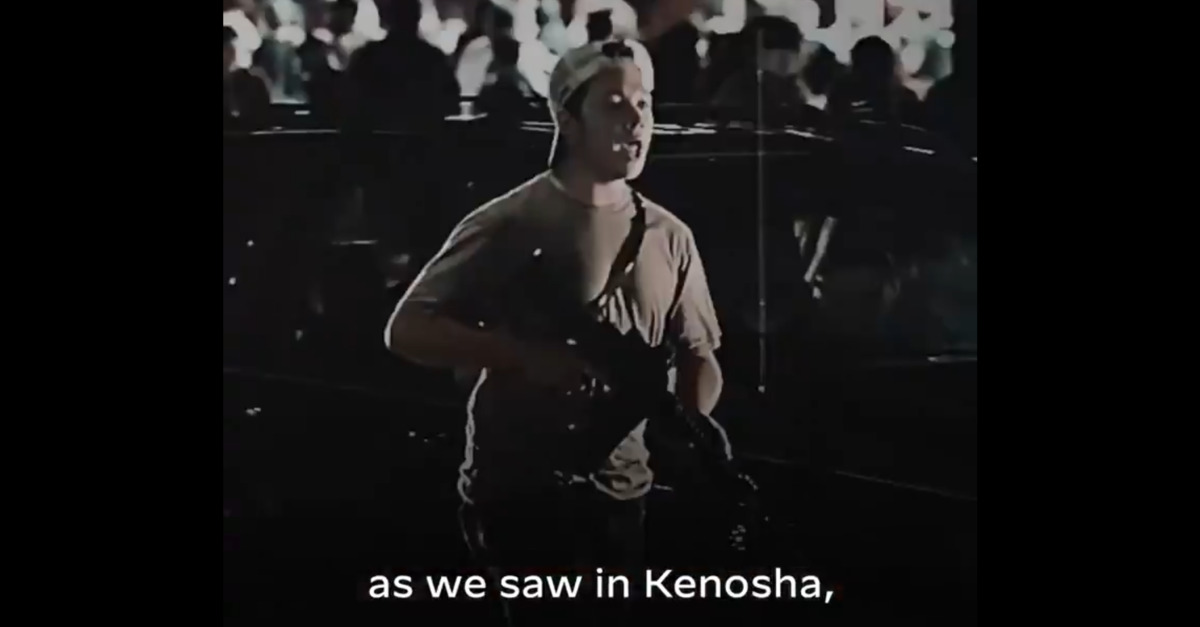 An attorney for accused murderer Kyle Rittenhouse threatened to sue the presidential campaign of former vice president Joe Biden over a video posted on the candidate’s social media feed on Wednesday.

“I am partisan in 20/20 supporting @realDonaldTrump,” the attorney who notably represented Nicholas Sandmann continued. “I am non-partisan trial lawyer who aggressively pursues truth to achieve justice. Put in your hearing aid, Joe. You will hear footsteps.”

Wood is apparently planning a lawsuit based on the inclusion of Rittenhouse in a Biden 2020 campaign video that features President Donald Trump refusing to condemn “white supremacists and militia groups” who have killed several people during various protests and counter-protests throughout the 45th president’s first term–beginning with the 2017 death of socialist Heather Heyer, who was murdered by “avowed neo-Nazi” James Alex Fields, Jr. in Charlottesville, Virginia.

In the video, debate moderator Chris Wallace asks the 45th president: “Are you willing, tonight, to condemn white supremacists and militia groups, and to say that they need to stand down and not add to the violence in a number of these cities, as we saw in Kenosha and as we’ve seen in Portland?”

Additionally, Biden’s tweet containing the video is captioned: “There’s no other way to put it: the President of the United States refused to disavow white supremacists on the debate stage last night.”

“Formal demand for public retraction is being prepared for Biden/Harris Campaign on behalf of Kyle Rittenhouse,” L. Lin Wood said in another tweet. “I also hereby demand that @JoeBiden immediately retract his false accusation that Kyle is a white supremacist & militia member responsible for violence in Kenosha.”

After sending several other tweets on the subject, Wood confirmed his intention to file the lawsuit to Fox News on Wednesday evening.

So, how strong is a potential defamation case against Biden and/or his campaign? Such a case is not particularly likely to succeed.

Editor’s note: this analysis largely relies on Wisconsin legal definitions because the shooting in question occurred in Wisconsin. Notably, Rittenhouse is an Illinois resident while Biden is a Delaware resident. Defamation statutes are somewhat and necessarily varied in different states but the fundamental elements of a defamation claim–and likely defenses–are more or less constant.

The Supreme Court of Wisconsin has endorsed the following definition for defamation: “A communication is defamatory if it tends so to harm the reputation of another as to lower him in the estimation of the community or to deter third persons from associating or dealing with him.”

Similar definitions are used in both Illinois and Delaware–with the former state adding the element that the defendant must be at fault “amounting to at least negligence.”

Here, the inquiry would likely focus on elements (1) and (3) because the second element is easily satisfied–Biden’s tweet and video were published to Twitter and have, as of this writing, been viewed over three million times.

As noted, in the Biden video, Rittenhouse’s image briefly appears just as Wallace mentions Kenosha–the 17-year-old can be seen holding a semi-automatic rifle amidst a backdrop of a racial justice protest. The protests occurred in late August after Kenosha police officer Rusten Sheskey shot Jacob Blake several times in the back, paralyzing Blake from the waist down.

The Biden campaign would likely raise the following issue: What, exactly, is false about showing self-styled militia member Rittenhouse in Kenosha when he did, in fact, shoot and kill two people in Kenosha? That question would likely be answered by a judge: there is nothing false about it whatsoever.

Wood may argue, however, that the Biden campaign referred to his client as a “white supremacist.” The Biden campaign would likely respond that, in fact, they simply played the clip of Wallace using the terms “white supremacists” and “militia groups”–a repetition of a media report or commentary that might carry a small amount of weight with a judge. Even better for the Biden campaign would be the argument that Rittenhouse’s image was only played in reference to “militia groups” of which Rittenhouse was admittedly a member.

Loyola Law School Professor and First Amendment law expert Aaron Caplan offered another wrinkle to the potential plaintiff’s case here: Rittenhouse’s picture being included in the video may not even rise to being a statement about the would-be plaintiff at all.

“Any allegedly defamatory statement must be ‘of and concerning’ the plaintiff,'” he said in an email to Law&Crime. “Nobody said anything about Kyle Rittenhouse by name. So the question becomes whether the video somehow IMPLIES a statement about Kyle Rittenhouse. If his face happens to appear in a montage of a whole bunch of other people, some of whom are white supremacists and some of whom are not, maybe it’s not saying anything about him.”

“So perhaps the video says *something* about Rittenhouse,” Caplan added. “But what is it saying?”

Caplan continued, noting that Rittenhouse must prove Biden made a false statement of fact and that at least some interpretations of the video aren’t false at all.

“[O]f course, if Rittenhouse actually is a white supremacist or member of a militia group, then it would not be a false statement — assuming that is the statement that was made,” Caplan concluded.

Notably, Rittenhouse’s own defense team has acknowledged that he is a member of the “militia.”

As a threshold issue, Rittenhouse and his attorneys would be hard pressed to prove even the basic falsity element here.

Perhaps even more disastrous for a potential defamation case against Biden is the likely determination that Rittenhouse is a limited-purpose public figure–and therefore must satisfy the Supreme Court’s longstanding “actual malice” standard. (This implicates Wisconsin’s third element for defamation and is also of the utmost importance for proving the Illinois “fault” element.)

When a plaintiff in a defamation suit is a public figure and the allegedly defamatory statements relate to a matter of public concern, the plaintiff must show that the defendant acted with actual malice that is, with knowledge that the statement was false or with reckless disregard of whether it was false or not.

Here, Rittenhouse would likely be viewed as a limited-purpose public figure because he attended a protest with a gun, then shot and killed two people while wounding a third. It is exceedingly unlikely any court would find Rittenhouse is not a public figure for the purpose of maintaining a libel action.

The defendants in an earlier high-profile defamation case offered the following lucid, relevant and germane encapsulation of conduct that would render someone a limited-purpose public figure:

Fatal shootings constitute public controversies and those responsible for them thereby become limited purpose public figures for purposes of news reports about such incidents. As the Utah Supreme Court has explained, “[o]ne who takes a life under any circumstances cannot be expected to escape public scrutiny.” Madsen v. United Television, Inc., 797 P.2d 1083, 1085 (Utah 1990), overruled on other grounds by O’Connor v. Burningham, 165 P.3d 1214 (Utah 2007). “Clearly, killing another person is a matter of public interest” and constitutes an action that causes the perpetrator, whether or not he is guilty of a criminal offense, to become a public figure.” Berry v. NBC, 480 F.2d 428, 431 (8th Cir. 1973).

The defendants in that case, NBC Universal, ultimately won–defeating the defamation lawsuit filed by George Zimmerman.

In defending against a potential defamation lawsuit, Biden’s campaign would likely convince a judge that Rittenhouse is a limited-purpose public figure and from there, the plaintiff would have an uphill battle proving the candidate or the campaign acted with knowledge the video’s statement was false or with reckless disregard for the truth or falsity of the statement–and determining what the alleged statement is here…is still an open question.

Due to the fact that the Biden campaign video only shows Rittenhouse’s image during the “Kenosha” reference, where militia groups were present, a potential defendant Biden would likely be able to successfully argue that Rittenhouse’s inclusion was a direct reference to the militia violence in Kenosha, Wisconsin. Arguing this, as a foundational matter, Biden could then go on to argue that the video broadcast his (and his campaign’s) belief that Rittenhouse was an example of the militia violence in Kenosha–because he admittedly was–and that they reasonably believed this to be true. Such a finding would likely be an easy call for any judge.

This actual malice standard focuses on the defendant’s subjective state of mind at the time of publication. That is, Rittenhouse will have to prove that Biden actually knew what they were posting was false–and, of course, that the statement was actually false–or that the campaign entertained serious doubts as to the truth of their video.

First Amendment and media law attorney Jonathan Schwartz, a partner at Jaffe Raitt Heuer & Weiss, said that if Rittenhouse and his attorneys file “any such case,” that case “will and should be dismissed as meritless and frivolous”:

I view this threatened lawsuit as a pathetic attempt for attention from an accused killer who deserves public condemnation in the strongest terms. Good for the Biden/Harris campaign for taking a stand against hate and violence. They should not back down in the face of this SLAPP lawsuit, and I doubt that Joe Biden or Kamala Harris have any concern about liability. It will almost certainly never get to the damages stage, but it also seems absurd to claim that the tweet and video at issue made anyone think less of Mr. Rittenhouse. Our collective energy, and the resources of the court, are better spent seeking justice for those killed, providing support for the families of the victims, and ensuring that this sort of tragic violence never happens again.