Legal Analysis: Is Regretful ISIS Bride Hoda Muthana an American Citizen or Not? 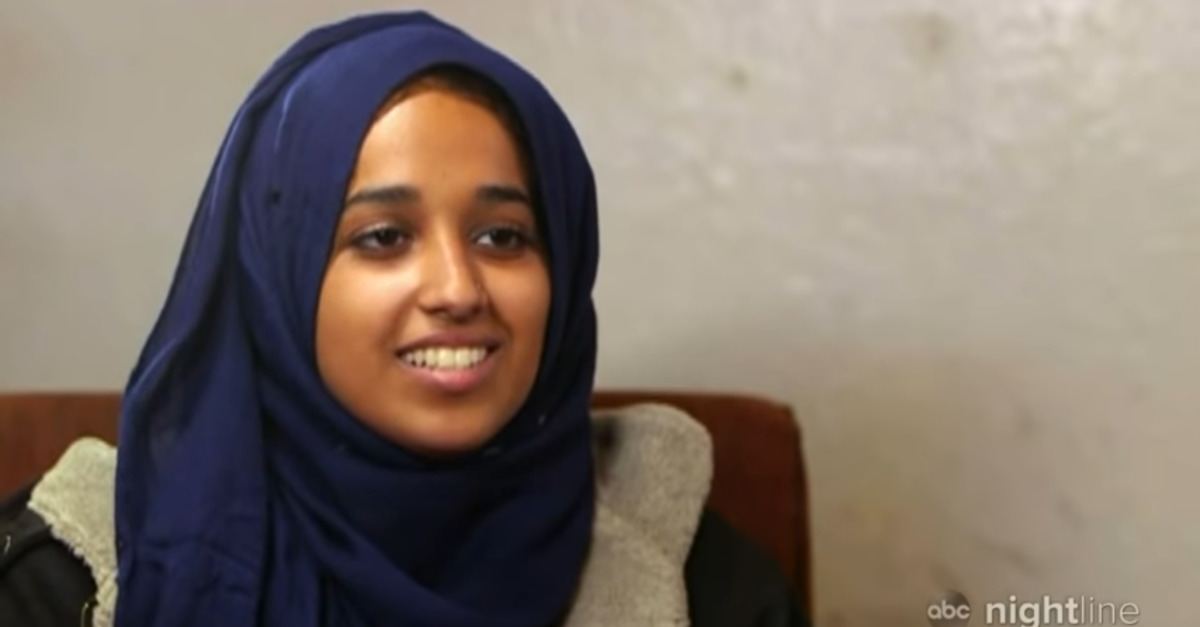 Update, Nov. 14, 2019: Judge rules Muthana is not a citizen as sufficient evidence showed her father was a diplomat at the time of her birth.

Earlier Wednesday, President Donald Trump jumped headfirst into an ongoing legal and ethical debate as to whether disgruntled and humiliated ISIS fighters have the right to return to their countries of origin.

I have instructed Secretary of State Mike Pompeo, and he fully agrees, not to allow Hoda Muthana back into the Country!

A brief refresher: Years ago, Muthana briefly made a splash across the ether after her takfiri husband of 87 days was allegedly killed during an airstrike carried out by the Royal Jordanian Air Force on March 17, 2015. Why all the fanfare about this one particular “ISIS member, bride, and [eventual] widow?”

Muthana was from Alabama. She was college-aged and had apparently registered for classes, then quickly ditched them for a refund check. She lied to her family and said she was taking a trip to Atlanta, Georgia. Instead, she went to Turkey where she somehow found passage to ISIS’ declared caliphate in Syria.

Now, after four years living with the degraded ranks of dwindling ISIS fighters, Muthana wants to come home–and she’d like some sympathy for her previous choice to join up with the terrorist enclave that laid waste to much of Syria and Iraq.

“I hope they excuse me because of how young and ignorant I was. Now I’m changed. Now I’m a mother and I have none of the ideology and hopefully everyone will see it when I come back,” Muthana said during a recent interview. “I hope America doesn’t think I’m a threat to them and I hope they can accept me.”

On Wednesday afternoon, U.S. Secretary of State Mike Pompeo issued an unprecedented statement declaring that the purportedly changed Muthana was “not a U.S. citizen and will not be admitted into the United States.”

“She does not have any legal basis, no valid U.S. passport, no right to a passport, nor any visa to travel to the United States,” his statement continued. “We continue to strongly advise all U.S. citizens not to travel to Syria.”

Sigh…2800+ retweets but revoking someone’s citizenship is not the same as not being one in the first place….and the president can’t revoke it if she had it…has to go through a court… https://t.co/RP18N580VV

Let’s take each in turn.

The first question might seem obvious but there’s an argument here for a reason. U.S. citizenship, at a minimum, affords a person to “all the rights and privileges that are part of U.S. citizenship.” That includes the protections of its laws as well as the U.S. Constitution.

This matters here because Muthana is seeking to return to the United States. If she’s a citizen, she simply cannot be barred from re-entering the country. If it’s determined that she broke any U.S. laws–which seems fairly likely–then she should and will, of course, be prosecuted for breaking those laws. But if she’s a citizen, the government can’t simply declare that she’s not allowed in. That’s not how America works.

The major issue here is how U.S. citizenship occurs. There are basically three ways: (1) birthright citizenship; (2) acquired or derived citizenship; and (3) naturalization. The latter two forms aren’t at issue here. The only argument is whether Muthana was born an American.

According to U.S. Citizenship and Immigration Services—and the referenced definitions in the Code of Federal Regulations–the term means:

So, would that apply here? Maybe. Maybe not.

University of Texas Law Professor Steve Vladeck seems to have divined that Pompeo and Trump believe Muthana is not a U.S. citizen because her father was a Yemeni diplomat.

I gather that the government’s argument is that she was born to a diplomat who was in the United States on official business, and so was not entitled to birthright citizenship. That’s correct as a matter of law if it’s true, but it’s not true just because the government says so.

Focus on the tense there. Muthana’s father was a diplomat.

According to Muthana’s family attorney, Muthana’s father was discharged from his diplomatic post one month prior to his daughter’s birth. And, when her family initially applied for her passport, U.S. authorities requested proof of his lapsed diplomatic status, checked on his story and found the evidence sufficient enough to grant Hoda Muthana not only her first passport at birth–but a passport renewal in 2014. She later burned this second passport after making her way to ISIS-controlled territory.

In other words: all of the available facts support the idea that Muthana was born a U.S. citizen. And, if those facts are true, then the law demands she retain her citizenship status–at least until it’s been adjudicated that she’s no longer entitled to such status.

And, as Professor Vladeck noted here and elsewhere, there’s a procedure for such an adjudication. It doesn’t just happen because Mike Pompeo or Donald Trump feel like it.

What’s that procedure? The law is contained at 8 U.S.C. § 1481(a) which offers a laundry list of possible ways a native-born citizen can lose their U.S. nationality.

Most of those ways, however, require serving in a foreign state. That didn’t happen because ISIS was not–and likely will not ever be–considered a foreign state by the U.S. government. Muthana also did not formally dispense with her nationality as required by the statute. Which could leave the prong which essentially revokes nationality for committing treason–but she’d have to be convicted of treason first.

Editor’s note: this article has been amended post-publication to correct a typo and for clarity.