Lawmaker Marjorie Taylor Greene, in Ten Words or Less, Gets HIPAA All Wrong 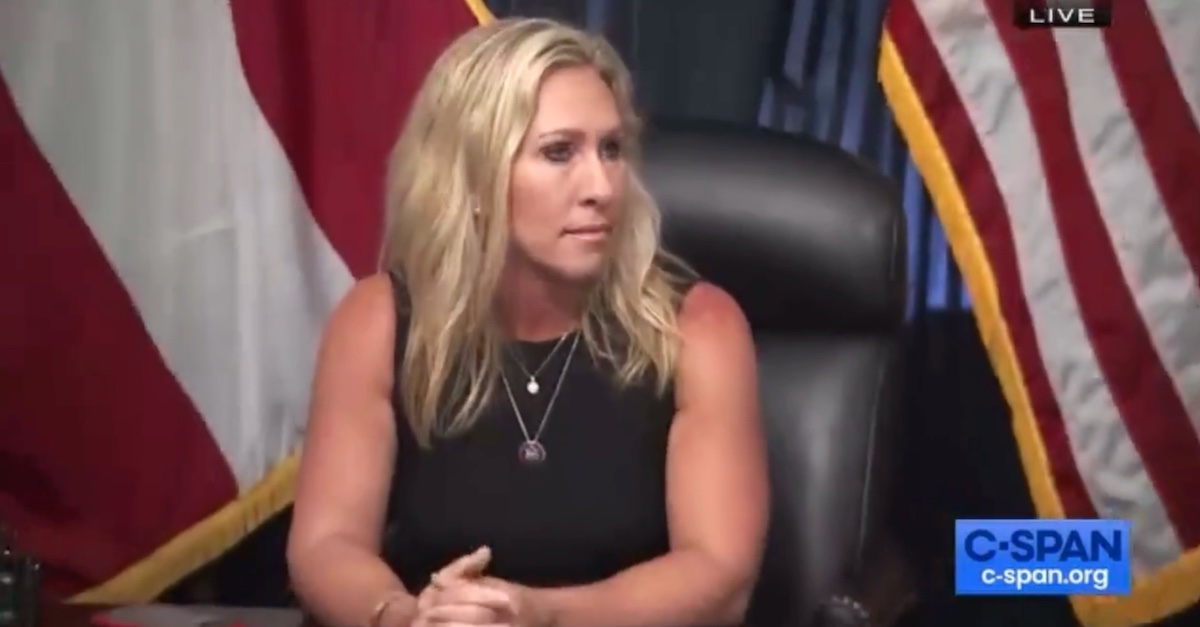 Rep. Marjorie Taylor Greene (R-Ga.) on Tuesday refused to answer questions from reporters about whether she’s been vaccinated against the coronavirus. She did so in a manner which suggests a serious misunderstanding about what federal law says.

Aaron Navarro of CBS News quizzed Greene about the highly contagious Delta variant of COVID-19 and noted that fellow Republican Rep. Steve Scalise of Louisiana finally received the vaccine on Sunday after holding out for several months. Scalise, after weeks of well documented trepidation, said he now considered the vaccines “safe and effective,” the reporter noted to Greene. The reporter also noted that Scalise is the Republican minority whip — whose job it is to keep other Republicans in line with the official policy goals of the party.

“Two questions: have you, yourself gotten vaccinated, and do you disagree with the Republican Whip?” the reporter asked.

Greene demurred by bungling, in 10 words or less, a federal statute which has absolutely nothing to do with the question or the situation.

“Well — your — your first question is a violation of my HIPAA rights,” Greene responded.

“You see, with HIPAA rights — uh — we don’t have to reveal our medical records, and that involves our vaccine records,” she added.

The reporter moved on to the second question without forcing Greene to explain how HIPAA worked.

Question: Have you yourself been vaccinated?
Greene: Your first question is a violation of my HIPAA rights pic.twitter.com/JuHDovV2mC

The problem with Greene’s answer is several fold.

First, she claimed the “question” itself was a “violation” of HIPAA. It was not.

HIPAA, the Health Insurance Portability and Accountability Act of 1996, applies to what the Department of Health and Human Services refers to as “covered entities” — and to certain organizations and people who do business with those entities. As most journalists know, the press is not a covered entity under HIPAA.

HIPAA applies to health plans (including those provided by an employer, if enough people are subscribers); most health care providers (including doctors, hospitals, psychologists, chiropractors, nursing homes, pharmacies, and dentists); and health care clearinghouses. Contractors, subcontractors, lawyers retained by covered entities, companies which destroy medical records, and computer specialists who work for covered entities are all themselves required to follow HIPAA because the law expressly applies to them.

As HHS also points out, certain organizations DO NOT have to follow privacy and security rules contained within HIPAA: life insurance companies, employers, workers’ compensation carriers, schools, state agencies, police agencies, and local municipal governments are not bound by HIPAA’s privacy rules. As HHS notes, employers can ask you for your information under HIPAA, but if they ask the doctor for the information directly, the doctor can’t give it out. Doctors are covered entities; employers are not. Your employer’s ability to dig into your health information and health care records is more thoroughly covered by equal employment laws and not by HIPAA.

Greene’s comment — which, again, claimed that the “question” itself violated HIPAA — was entirely inaccurate. Journalists are not banned, barred, or bound by HIPAA from inquiring about anyone’s health status or their vaccination status. It’s up to the individual to whom the question is posed to decide whether or not to answer. HIPAA does not ban journalists from asking about health information. Indeed, if it did, then the law would almost surely have been met with a vigorous First Amendment challenge.

Think about it: journalists inquire about people’s health status thousands of times a day. Stories which showcase new medical treatments, stories which cover fundraisers for accident victims, and stories which involve legal and police proceedings all discuss medical information. A gaggle of weary reporters in any given American city on any given night will be poised to ask the local constabulary whether a shooting victim has lived or died. Journalists who hear a surviving victim’s medical diagnosis in a criminal trial can report the information without HIPAA getting in the way. They can report where someone was shot or injured and what treatments were necessary. Reporters who wish to publicize a surviving victim’s tale of woe can repeat what said victim tells them without requiring a signature on the dotted line of a concomitant HIPAA waiver.

The second part of her statement is equally problematic.

Greene claimed that under HIPAA, “we don’t have to reveal our medical records, and that involves our vaccine records.”

That is also incorrect.

People have to reveal medical information all the time. HIPAA does not grant each American medical patient a universal shield against the passing of medical data.

Employers have a legal right question whether job candidates are fit for service. Schools can ask bus drivers whether they can see properly with or without corrective lenses. Airlines can ask pilots whether they have a history of seizures. Railroad engineers can be required to take drug tests. Warehouses can ask applicants if they can lift boxes of a certain weight. Firefighters and police officers are required to prove physical fitness. Medical examinations are often attached to such employment. HIPAA does not ban the asking of such questions or the gleaning of such data.

Compulsory legal processes also require patients to pass over information or allow covered entities, such as doctors, to share it. Plaintiffs in personal injury actions have to turn over medical data because they have voluntarily made their injuries the subjects of legal disputes. Workers’ compensation claimants must submit information if they want their health care expenses paid by the system. Doctors are required to report suspected child abuse to the authorities. Local health authorities can obtain reports about individuals who carry communicable diseases in order to protect the public at large. Hospitals can release information about unidentified patients to the press in hopes of finding next of kin.

Again, bottom line: HIPAA does not prevent Greene from saying whether she’s received a vaccine.

She simply doesn’t want to say whether she’s received a vaccine.

That’s her right as well. She can refuse to answer questions about whether she’s been vaccinated, and like any other job applicant, she can either be rewarded with continued employment (by the voters) or can be summarily shown the door (again, by the voters) based on her answer. But HIPAA has nothing to do with whether the question can be asked by the press or whether she can share the information. Tying HIPAA to the answer sought and to the answer given in this particular press conference is a complete non sequitur. HIPAA has as much to do with the press asking an elected public official about her vaccine status as the 6:14 train from Grand Central to Poughkeepsie has to do with whether or not a fisherman will score a record catch in the middle of Lake Superior tomorrow afternoon. In other words, they’re completely unconnected.

Typically, it is helpful for those who aspire to write and affect laws to know how laws work.

Greene really called the press conference to complain about her Twitter ban for spreading misinformation about COVID-19 and vaccines.

I’m holding a press conference in my office at 4:45 PM to discuss the Communist style Twitter ban I received last night.