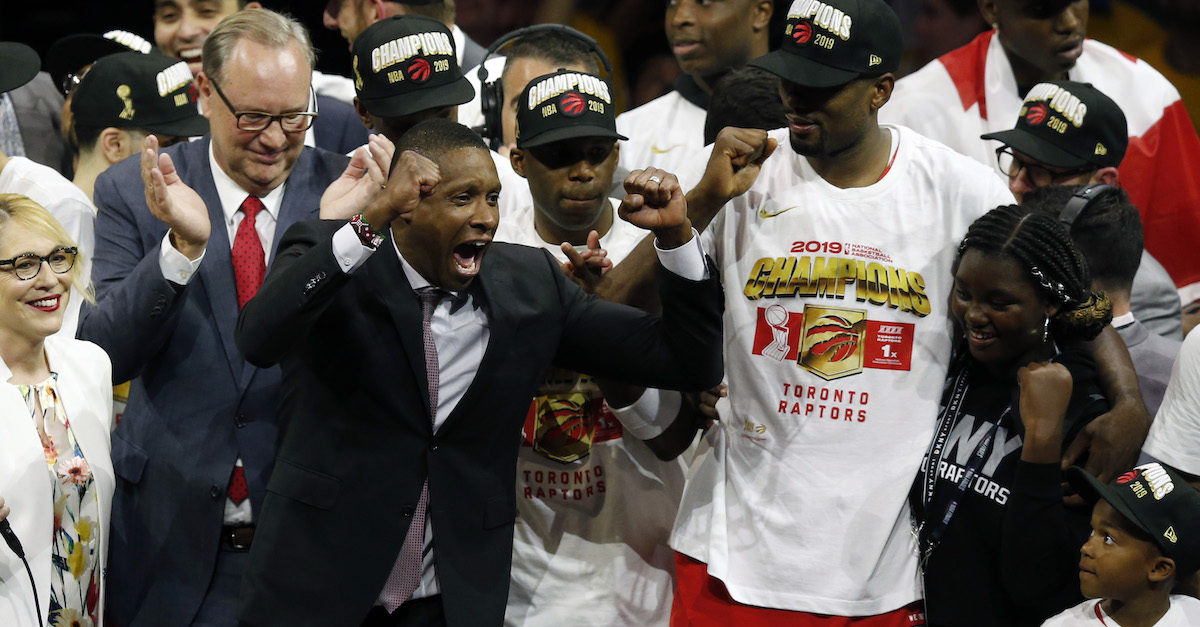 Ujiri celebrates his teams victory over the Golden State Warriors to win Game Six of the 2019 NBA Finals at ORACLE Arena on June 13, 2019 in Oakland, California.

The video was released Tuesday when Ujiri’s attorneys filed a counterclaim against Strickland. The tape clearly shows the sheriff’s deputy twice shoving Ujiri, who was holding his on-court credentials in his hand, as the executive made his way down to the court to celebrate the team’s championship over the Golden State Warriors in June of 2019. Strickland can also be heard telling Ujiri to “back the fuck up.”

A different camera angle also appears to confirm that Strickland, not Ujiri, was the aggressor.

The security video from the end of Game 6 in Oakland has been released. It’s pretty clear Deputy Alan Strickland was the aggressor in this altercation with #Raptors President Masai Ujiri. This cop is a straight clown. pic.twitter.com/ANaOLWRmHh

After an investigation into the incident by the Alameda County District Attorney’s Office resulted in no charges being filed against either man, Strickland filed a lawsuit in U.S. District Court in Oakland against Ujiri for assault, battery, intentional infliction of emotional distress, and two counts of negligence.

In the lawsuit, Strickland claimed that he stopped Ujiri because he didn’t see his credentials. As a result of the incident, the deputy claimed he was physically injured and suffered “severe emotional and physical distress.” He sought an undisclosed amount greater than $75,000 in compensatory damages, as well as punitive damages and medical expenses. Strickland’s wife also asserted a loss of consortium claim for alleged deprivation of love, companionship, and comfort arising from her husband’s purported injuries.

“Though discovery is in its infancy, Defendants have already obtained evidence seriously calling into question Plaintiffs’ version of events, and in fact revealing that Mr. Ujiri has ripe legal claims against Mr. Strickland,” Ujiri’s attorneys wrote in the counterclaim. “This footage demonstrates that Plaintiff Strickland shoved Masai Ujiri twice, giving rise to credible counterclaims for unreasonable force, assault, and battery. Indeed, the footage reveals Strickland, not Ujiri, as the assailant aggressor.”

Strickland had also filed a workers’ compensation claim in which he alleged that Ujiri “circumvented” the security checkpoint and referred to the team’s executive as having a “violent predisposition” and acting with an “evil motive amounting to malice.”

The countersuit also noted that the body cam footage called into question “Strickland’s claim he was assaulted by Defendant Ujiri to the point of permanent disability, as alleged by Strickland in his parallel workers’ compensation case.”

The Raptors release a statement on Tuesday saying the team stood by Ujiri.

“We are mindful this remains before the courts, but we have always maintained that the claims made against Masai are baseless and entirely without merit. We believe this video evidence shows exactly that — Masai was not an aggressor but instead was the recipient of two very violent, unwarranted actions. The events of that evening cast a pall over what should have been a night of celebration, and the year since,” the team said. “While Masai has the full backing of Raptors and MLSE as he fights this injustice, we are aware that not all people have similar support and resources. This is a spurious legal action that MLSE, the NBA, and especially Masai should not be facing.”

But wait—there’s more. Ujiri’s lawyers included both a picture of Strickland’s face after the incident and Strickland’s “history of committing fraud.”

Note to lawyers: Conduct diligence on your own clients before filing suit against a public figure in federal court. pic.twitter.com/114c8zodfc

“Per court records, [Strickland] purposefully damaged his own vehicle and then submitted a claim to his insurer for the damage he intentionally caused, and ultimately pled guilty to misdemeanor insurance fraud in December 2005,” the filing said. “Despite his criminal conviction, Mr. Strickland continues to make false claims.”

Read the full countersuit below: