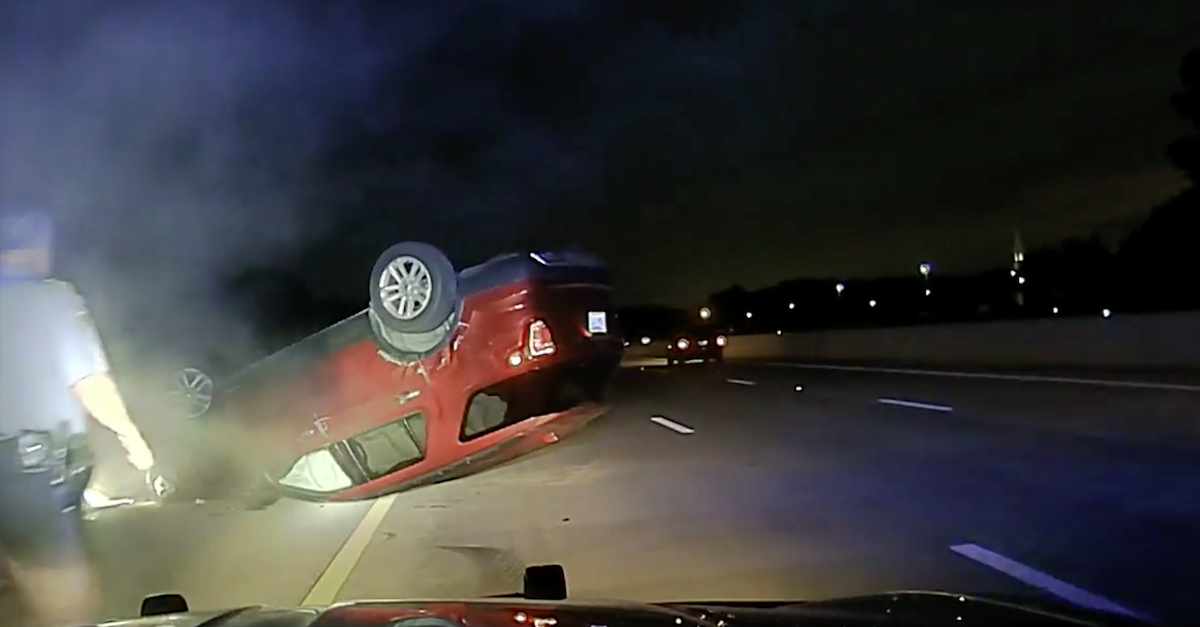 An Arkansas woman has accused the state police of negligence, excessive force, and assault after an officer who attempted to pull her over for speeding used a dangerous “pursuit intervention technique” (PIT) that caused her car to flip upside down and collide with a divider on the highway. The officer claimed he used the maneuver because the woman, who was two months pregnant at the time, did not pull her car over quickly enough. But the plaintiff says dashcam video shows that she reduced her speed and turned on her hazard lights well before the officer rammed her vehicle.

According to the 23-page complaint, the 38-year-old Harper was driving home when Dunn allegedly clocked her going 84 mph in a zone with a 70 mph speed limit. Harper’s attorney says dashcam footage of the incident shows that within seconds of Dunn turning his lights on, Harper slowed down and pulled into the right lane of the three-lane highway.

The complaint further alleges that due to the reduced shoulder on both sides of the road, Harper could not safely pull over, so she turned on her hazard lights and continued driving in the right lane at approximately 60 mph looking for an area to safely stop the car.

After the PIT maneuver caused Harper’s car to flip, the footage shows Officer Dunn pulling up the wreckage then approaching her vehicle on foot, knocking on the driver’s side window and asking if she can get out of the car. He then asks her, “Why didn’t you stop?”

“Because I didn’t feel like it was safe,” she responded.

“Well, this is where you ended up,” Dunn said.

Harper again said, “I thought it would be safe to wait until the exit.” To which Dunn replied, “no ma’am, you pull over when law enforcement stops you.”

According to the “Arkansas Driver License Study Guide,” drivers being pulled over by a law enforcement officer are directed to “pull to the nearest/safest spot out of the traffic lane.”

Later in the conversation, Dunn can be heard telling Harper that the incident could have been avoided, saying, “all you had to do was slow down.”

“I did slow down, I turned on my hazards, I thought I was doing the right thing,” Harper responded.

In the lawsuit, Harper accuses Dunn of negligence, assault, battery, extreme and outrageous conduct, excessive force, and malicious prosecution. The latter claim stems from Dunn charging Harper with one count of Failure to Yield to an Emergency Vehicle, alleging there was no probable cause for such a charge, which carries a maximum fine of $400.

The suit also named as defendants Dunn’s supervisor Alan C. Johnson, Arkansas State Police Director Col. William J. Bryant, and the individuals or entities who responsible for teaching Dunn the PIT maneuver. She is seeking damages in excess of $100,000.

Reached for comment, Harper’s legal team at Denton & Zachary PLLC simply said that “the video speaks for itself.”