Steve Bannon’s Lawyer Robert Costello Seeks to Withdraw from Contempt of Congress Case, Claiming He May Be a Witness 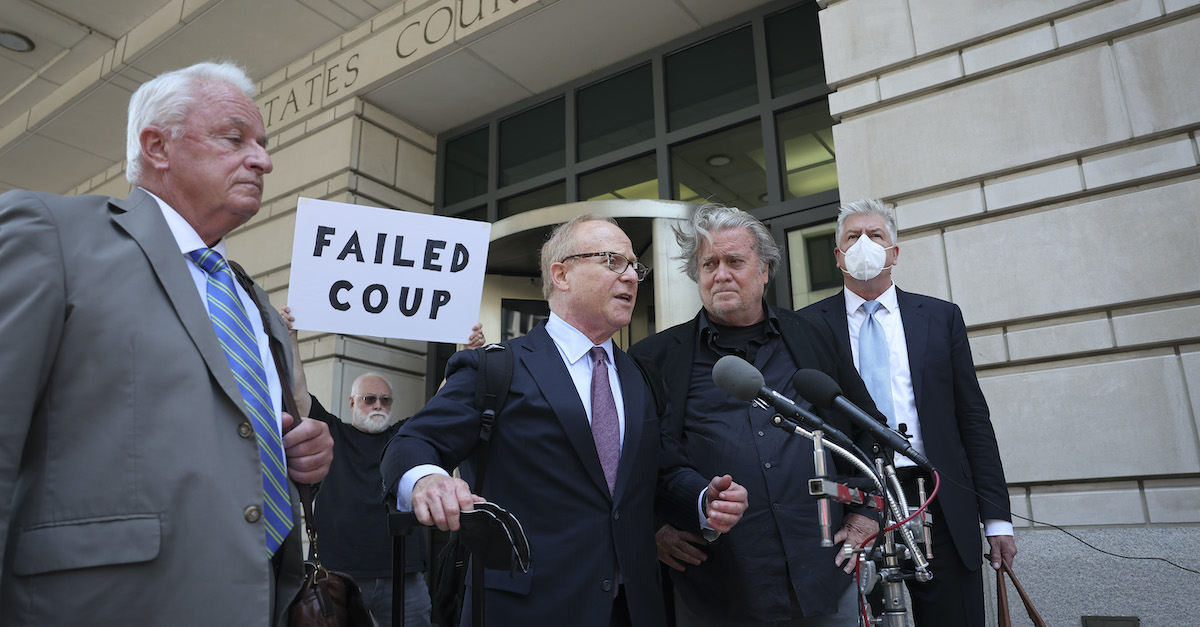 Steve Bannon (C), adviser to former President Donald Trump, appears with members of his legal team outside of the E. Barrett Prettyman U.S. Courthouse on June 15, 2022 in Washington, D.C. His attorney Robert J. Costello stands on the left.

One of Steve Bannon’s attorneys asked to withdraw from representing the ex-Donald Trump strategist, claiming that he may need to act as a witness at Bannon’s upcoming contempt of Congress trial.

“Due to the fact that I have been the only individual who interacted with the Select Committee and that Mr. Bannon’s sole basis of information about the facts and the law concerning this matter came about through communications with me, there has always been the possibility that I might be called as a witness in this matter,” attorney Robert Costello wrote in a four-page motion to withdraw as counsel.

Costello has a long history representing Trump associates in investigations circling around the former president.

Though his name was redacted, Costello figured in former special counsel Robert Mueller’s report as the attorney who told Michael Cohen that he had “friends in high places” after the FBI raided his home in 2018. Costello, whom Mueller described as a “backchannel” to Trump’s attorney Rudy Giuliani, told a reporter that by “friends in high places,” he meant Trump.

Costello’s latest motion that his attorney-client relationship with Bannon has been similarly longstanding, writing that he’s represented Bannon “on a number of different matters for the past three years.”

The lawyer said that he examined his ethical obligations in light of the possibility that he may be a witness.

“The issue currently facing me is that this Court has yet to determine if I will be permitted to testify if offered as a witness on behalf of Steve Bannon,” Costello wrote. “Indeed, this Court has referred to that issue as ‘a very complicated question.'”

Federal prosecutors have asked U.S. District Judge Carl J. Nichols to bar Bannon from advancing a so-called advice of counsel defense, which they consider to be a backdoor attempt at jury nullification. Nichols, a Trump appointee, has not yet ruled on what final form the jury instructions will take.

“If the court decides to prevent me from testifying, there will be no pathway to inform the jury about the communications with the Select Committee or the three prosecutors in this case, who interfered with Mr. Bannon’s attorney-client relationship by attempting to turn me into a witness against my client by surreptitiously subpoenaing my home, office direct line and cellphone records while at the same time failing in their attempts to obtain my social media information,” Costello claimed.

“What the defendant knows—because he has all of the data collected by the government — but does not state with any clarity for the court — is that none of the information the government obtained includes the content of any communications,” prosecutors wrote on Feb. 25 of this year.

Judge Nichols will hold a hearing on Monday morning.