John Eastman Knew He Would Lose 9-0 at SCOTUS: Greg Jacob 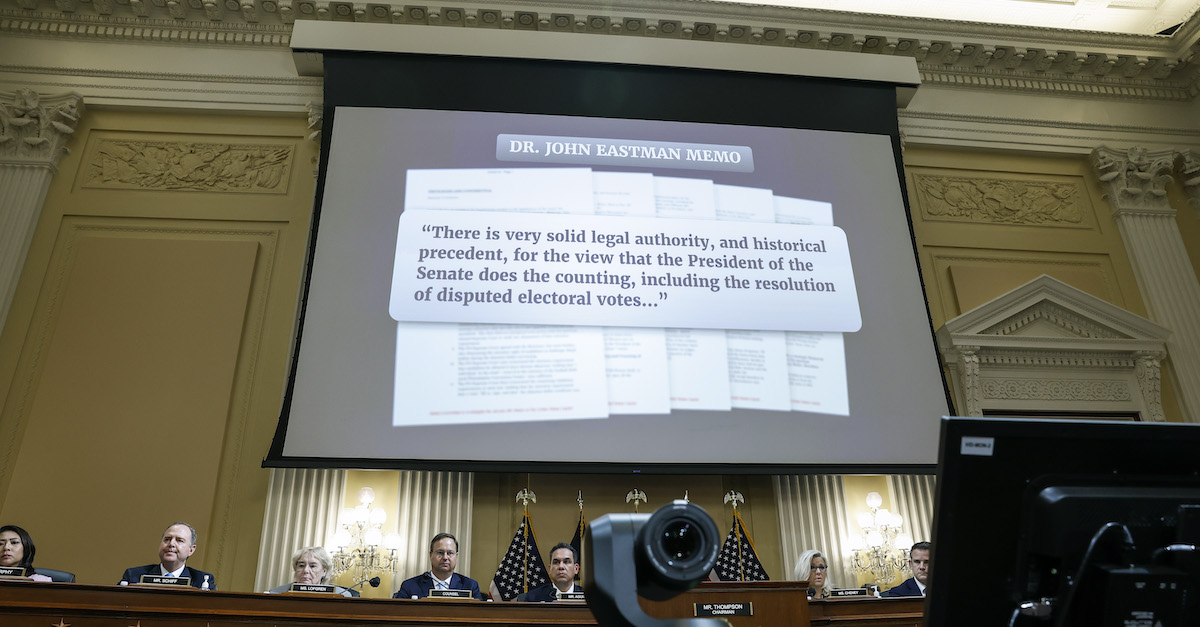 WASHINGTON, DC – JUNE 16: An excerpt from a memo by John Eastman, attorney for former President Donald Trump, is displayed during the third hearing of the House Select Committee to Investigate the January 6th Attack on the U.S. Capitol in the Cannon House Office Building on June 16, 2022 in Washington, DC.

Former President Donald Trump’s lawyer who helped conceptualize the pressure campaign pushing Mike Pence to delay the certification of Joe Biden’s victory didn’t believe in his own theory and knew it would fail 9-0 if it ever went to the Supreme Court, the former vice president’s lawyer testified on Thursday.

“He initially started, ‘Well, maybe you’d only lose seven-to-two,’ but ultimately acknowledged that ‘No, we would lose 9-0,'” Pence’s attorney Greg Jacob testified during the Jan. 6 Committee’s third hearing, referring to his conversation with Trump’s lawyer John Eastman. “No judge would support his argument.”

The author of the so-called “coup memo,” Eastman was one of the speakers at Trump’s rally at the Ellipse on Jan. 6. Eastman and Rudy Giuliani both pushed the theory that Pence could reject the certification of Biden’s election. Jacob resisted this plan and blamed Eastman’s theory for the Jan. 6 attack on the U.S. Capitol.

In the middle of the third hearing, The New York Times reported the Justice Department has been investigating Eastman and Giuliani in connection with a probe into the scheme to send alternate slates of pro-Trump electors to Congress.

“I’m Here to Request that You Reject the Electors.”

During his testimony on Thursday, Jacob said that he and Eastman had spent days ahead of Jan. 6 volleying over two legal theories that Eastman raised during a Jan. 4 meeting between himself, Eastman, Trump, Pence, Pence chief of staff Marc Short, and, briefly, Trump chief of staff Mark Meadows.

One theory, which Eastman reportedly considered the more “aggressive” approach, involved Pence outright rejecting the votes from the “disputed states.” The other theory, which Jacob described as a more “procedural” approach, involved Pence essentially suspending the joint session of Congress and demanding the states that that they reexamine the election there and declare who had one.

Jacob testified that during that Jan. 4 meeting, Eastman said he felt the more “aggressive” option would be “less politically palatable” than sending the results back to the individual disputed states.

The next day, however, Eastman changed course.

“When Mr. Eastman came in, he said ‘I’m here to request that you reject the electors,'” Jacob testified, describing a Jan. 5 meeting with Eastman. Eastman was now endorsing the very plan he had rejected just the day before.

“On [Jan. 5th], he came in and expressly requested that,” Jacob testified.

“He had recommended against it on the 4th,” Jacob confirmed. “The on the 5th, his first words were: ‘I’m here to request that you reject the electors in the disputed states.”

Jacob said he was surprised.

“I had viewed it as one of the key concessions we had secured the night before from Mr. Eastman that he was not recommending we do that,” Jacob testified.

Jacob said that he walked Eastman through the multiple reasons why the Constitution wouldn’t support Eastman’s approach. Eastman apparently tried to push back, making, among other arguments, a historical argument that Thomas Jefferson had asserted that the Vice President did have the authority to reject electors.

“[Eastman] had acknowledged by the end that there was no historical practice whatsoever that supported his position,” Jacob said.

While Eastman conceded in his conversation with Jacob that that wasn’t actually true, Eastman stood silently as Trump, just feet away at the podium during his “Stop the Steal” rally, repeated the erroneous claim about Jefferson.

Eastman also apparently told Jacob that the courts wouldn’t get involved, and that they would instead invoke the “political question” doctrine. With the courts out of the picture, under Eastman’s theory, the disputed states would “send back” slates of electors supporting Trump, and Americans would accept that, Jacob said.

“I expressed my vociferous disagreement with that point,” Jacob said. “I did not think this was a political question. If the courts did not step in to resolve this, there was nobody else to resolve it.”

“Constitutional Jump-Ball Situation” Would “Have to Be Decided in the Streets.”

Jacob’s testimony painted a stark picture of where he and his colleagues thought Eastman’s approach would ultimately lead.

“You would be in a situation where you have a standoff between [the President and Vice President], saying we’ve exercised authority that under the Constitution we both think we have by which we have deemed ourselves the winner of the election,” Jacob said. That position would have been opposed by the House and Senate.

Jacob noted that state legislatures, as well as Republican leaders, had already put out statements saying that they had no intention of reversing the outcome of the election.

“No state had any legislative house that indicated they had any interest in it,” Jacob said. “You would have had a constitutional jump-ball situation with that standoff.”

“I said that issue might well have to be decided in the streets,” Jacob said.

“If you can’t work it out politically,” Jacob added, “we’ve already seen how charged up people are about the election. It would be a disastrous situation.

Jacob said that he continued to seek common ground with Eastman.

“I asked John: can’t we both agree this is a terrible idea?” Jacob said. “He said he couldn’t quite get himself to say that, [but] he said I can see we’re not going to be able to do this.”

The hearing ended with an explosive revelation: The committee displayed an email in which Eastman wrote, “I should be on the pardon list, if that is still in the works.” Eastman asserted his Fifth Amendment right against self-incrimination 100 times during his deposition, Rep. Pete Aguilar (D-Calif.) said.