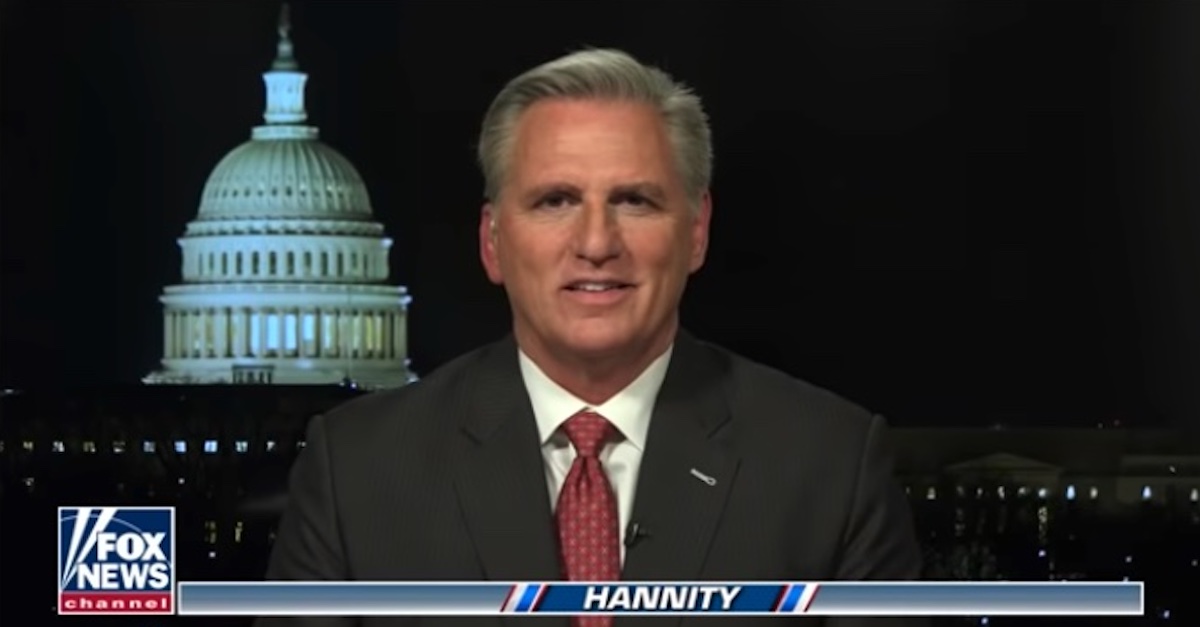 The House Jan. 6 committee has requested a meeting with House Minority Leader Kevin McCarthy (R-Calif.) so that he can answer questions about his communications with Donald Trump before, during, and after the siege of the U.S. Capitol.

Rep. Bennie Thompson (D-Miss.), the chairman of the House Select Committee to Investigate the Jan. 6 Attack on the U.S. Capitol, sent a six-page letter to McCarthy on Wednesday.

“We write to request your voluntary cooperation with our investigation on a range of critical topics, including your conversations with President Trump before, during and after the violent January 6th attack,” Thompson’s letter begins.

Thompson reminds McCarthy of statements the Republican leader made as the attack was underway, when hundreds of Trump supporters overran police and breached the U.S. Capitol building in an attempt to stop the certification of Joe Biden‘s win in the 2020 presidential election.

“I was very clear with the President when I called him,” McCarthy told CBS News anchor Norah O’Donnell. “This has to stop and he has to go to the American public and tell them to stop this.”

Days later, McCarthy took to the House floor to say that Trump was responsible for the events of Jan. 6, and should have done more to quell the riot.

“The President bears responsibility for Wednesday’s attack on Congress by mob rioters,” McCarthy said on the House floor on Jan. 13, 2021. “He should have immediately denounced the mob when he saw what was unfolding.”

The letter cited multiple media reports about McCarthy’s conversations with Trump, in which McCarthy repeatedly fought with Trump in an effort to get him to more strongly denounce the violence at the Capitol.

“[I]n addition to all of those published accounts—which each appear consistent with your public statements at the time—Politico reported that you shared an even greater degree of detail with your colleagues in a widely attended conference call on January 11th. On that call, according to the report, you stated that President Trump had admitted ‘some degree of responsibility’ for January 6th in his one-on-one conversations with you,” the letter says.

However, according to the committee’s letter, McCarthy’s position appears to have changed since he visited Trump at the end of January.

Despite the many substantial concerns you voiced about President Trump’s responsibility for the January 6th attack, you nevertheless visited President Trump in Mar-a-Lago on January 28th (the impeachment trial began on February 9, 2021). While there, you reportedly discussed campaign planning and fundraising to retake the House majority in 2022. The Select Committee has no intention of asking you about electoral politics or campaign-related issues, but does wish to discuss any communications you had with President Trump at that time regarding your account of what actually happened on January 6th. Your public statements regarding January 6th have changed markedly since you met with Trump. At that meeting, or at any other time, did President Trump or his representatives discuss or suggest what you should say publicly, during the impeachment trial (if called as a witness), or in any later investigation about your conversations with him on January 6th?

Thompson said the committee wants to know more about what Trump had planned for Jan. 6, as well as the former president’s response to being told his efforts to overturn the election results wouldn’t succeed.

“We also must learn about how the President’s plans for January 6th came together, and all the other ways he attempted to alter the results of the election,” the letter says. “For example, in advance of January 6th, you reportedly explained to [Chief of Staff] Mark Meadows and the former President that objections to the certification of the electoral votes on January 6th ‘was doomed to fail.’ How did they respond? Why were they nevertheless so confident that the election result would be overturned?”

Thompson suggested a meeting date of Feb. 3 or Feb. 4 or, if McCarthy is unavailable on those dates, a time during the week of Feb. 7.

Read the House committee’s letter, below.