Trump Makes Bizarre Promise About His Legal Authority as President 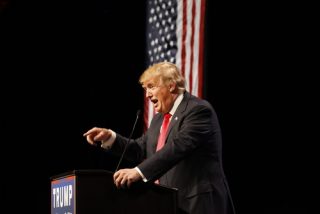 This weekend, to deflect some attention from the ever-growing list of women who have alleged sexual assault, Donald Trump has outlined his 100-day plan for for his proposed administration.  In it, he has promised that for every federal regulation passed, two existing regulations must be eliminated. That “get one new, get rid of two” logic when the topic relates to updating one’s wardrobe, but it’s pretty far from realistic if we’re talking about laws.

Promises to single-handedly eliminate federal regulation have become something of a Republican standard during presidential campaigns, even if past promises haven’t been as patently ridiculous as Trump’s. The Mitt Romneys and Chris Christies of yesterday have desensitized listeners with their bravado about repealing the laws of an overreaching government. Now, a candidate who has no qualms about disregarding the actual scope of a president’s legal authority, is making bizarre guarantees that are going unchecked by anyone still listening.

I’m sure many a Trumpkin will point to President Obama’s “tyrannical” use of executive orders as precedent for what their candidate has proposed.   But the devil is in the details here. Federal regulations are not the same things as executive orders. Federal regulations are laws adopted by federal regulatory agencies as the result of a lengthy legislative process. That process involves research, open discussion and hearings.  Administrative regulation are, by their very nature, a collaborative process; by contrast, executive orders are meant to be made by the flourish of a presidential pen. But (and this is a pretty big “but,”) executive orders cannot constitutionally create new law. Executive orders merely direct an existing agency to enforce an existing law. For example, when President Obama issued an executive order in 2012 regarding immigration, he was directing agencies including INS, DHS, and ICE to use their existing power by prioritizing the deportation of certain groups of immigrants.

If any president were inclined to follow through on a promise to demolish federal regulations, he or she would, theoretically, have three available means with which to do so:

Trump’s willfully-blind supporters cheer fervently at his promises to unilaterally repeal federal legislation; nothing could be more illustrative of the dangers to which this man has exposed the American government. The executive branch lacks the power to create or destroy law — its only function is to enforce it. Trumpeters are willing to sacrifice our entire system of checks and balances for some amorphous (not to mention unwise, illogical, in most cases, totally uninformed) goal of deregulating our society. Trump’s vow to, “get one new, get rid of two,” detests law for law’s sake – a rhetoric heretofore reserved for only the anarchic and the dimwitted. 2016 is a new world, though – one in which thousands will rally behind an authoritarian on the basis that he pledges “change” from the status quo. Trump is right about one thing. A president who would wield power he doesn’t have to effect changes we don’t want for purposes we don’t know is a major departure from business as usual; it’s an exodus from the very democracy upon which this country was founded.  Such a change is clearly not “conservative” in that it fails to safeguard or maintain anything of value. Neither is it “progressive” or even “regressive,” but rather, it is a radical break from all things American.