Report: Trump Took $17 Million in Insurance for ‘Hurricane Damage’ That Might Not Exist 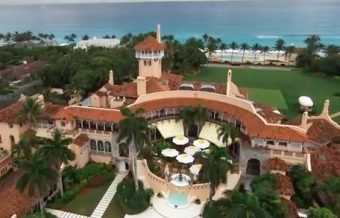 Another report is hot off the press and, once again, it’s not shedding a good light on Donald Trump‘s ability, to, uh, handle money. According to The Associated Press, Trump said he received a $17 million insurance payment for hurricane damage at Mar-a-lago private beach club in 2005 — but the news organization was unable to find evidence that the resort suffered that much actual damage during the time frame indicated.

The report says that 2 years after the 2005 storm, Trump admitted to pocketing some of the money into his personal accounts, saying that under the terms of his insurance policy, he didn’t have to reinvest. In fact, in a deposition, he called the $17 million a “very good policy.” In the deposition, he insisted some of the money was going to restore the property including “landscaping, roofing walls, painting, leaks, artwork.”

However, here’s where the report gets really interesting.

“That house has never been seriously damaged,” Anthony Senecal, Trump’s former butler told the Associated Press.  “I was there for all of them (hurricanes).”

And interestingly, Trump apparently hosted his son’s wedding at the private club two weeks after Hurricane Wilma in 2005. Oh, and the AP checked in with the permits department and found out that no permits were issued for major repairs.

“The only permits that appeared hurricane-related were for $3,000 in repairs to storm-damaged outdoor lighting and the vacuuming of sand from the property’s beachfront pool,” the report reads. Of course, the repairs could have been done without permits, but, the article notes, the work would likely be “illegal.”

But, let’s be clear, insurance companies don’t just make $17 million payouts without a thorough investigation, as the article pointed out. If you’ve ever filed an insurance claim, you know it’s no easy process. Executives from the insurance companies said they remember the process moving smoothly. So that leaves a lot of questions: What was the money used for? Where was the damage? Why can’t anyone seem to remember it?