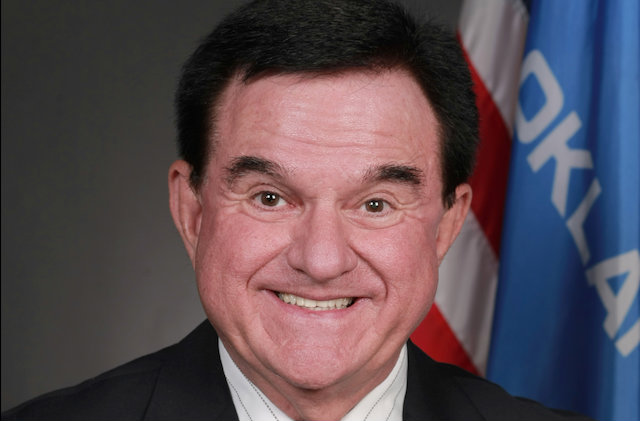 An Oklahoma lawmaker faces blowback after making a budget-cutting proposal: turn over non-English speaking students to Immigration and Customs Enforcement.

“Identify them and then turn them over to ICE to see if they truly are citizens, and do we really have to educate non-citizens?” Rep. Mike Ritze (R-District 80) told News 9 in a Wednesday report. Even his colleagues on the House Republican Platform Caucus didn’t have his back on this one.

“The idea of identifying and detaining non-English speaking students was never discussed in any of our meetings,” they said in a statement Friday. “We absolutely do not support this idea.”

We reached out to Rep. Ritze’s office. They did not respond by press time.

“It’s unfortunate that this lawmaker is not familiar with past attempts to discriminate against foreign born children, and both the federal courts reviewing a California statute and the Supreme Court reviewing a Texas statute,” she told Lawnewz.com.

She is talking about the blowback against CA’s Proposition 187, and the result of the 1982 case Plyler v. Doe.

Prop 187 was a ballot initiative passed in 1994. It established, as a budget-cutting measure, that undocumented immigrants couldn’t use public services, including education. This sparked a legal battle that the state lost.

“The illegal aliens who are plaintiffs in these cases challenging the statute may claim the benefit of the Equal Protection Clause, which provides that no State shall ‘deny to any person within its jurisdiction the equal protection of the laws,'” the holding states. “Whatever his status under the immigration laws, an alien is a “person” in any ordinary sense of that term.”

In sum, education has a fundamental role in maintaining the fabric of our society. We cannot ignore the significant social costs borne by our Nation when select groups are denied the means to absorb the values and skills upon which our social order rests. In addition to the pivotal role of education in sustaining our political and cultural heritage, denial of education to some isolated group of children poses an affront to one of the goals of the Equal Protection Clause: the abolition of governmental barriers presenting unreasonable obstacles to advancement on the basis of individual merit. Paradoxically, by depriving the children of any disfavored group of an education, we foreclose the means by which that group might raise the level of esteem in which it is held by the majority. But more directly, “education prepares individuals to be self-reliant and self-sufficient participants in society.”

If Ritze’s proposal ever did pass, it likely would face stiff resistance in court.