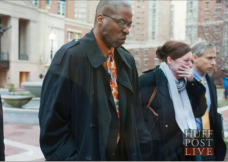 Jeffrey Sterling has been in a federal prison since last year, on a 3 1/2-year sentence for leaking classified information. A former CIA operative, who began working for the agency in 1993 and was fired in early 2002, Sterling was found guilty of providing information related to efforts against Iran’s nuclear program to author James Risen. Sterling was indicted four years after leaving the CIA, after Risen released his book, “State of War.”

Sterling, whose termination from the CIA occurred after he sued them for discrimination in 2001, spoke to a Washington Post reporter about his case. He denied leaking any classified information, and felt that higher-ranking government officials accused of similar acts received lighter treatment. He referred to General David Petraeus, who got only two years of probation and a fine after revealing classified materials to his mistress, and Democratic Presidential nominee Hillary Clinton, who so far has not been charged with any crimes, after allegations that she improperly maintained emails with classified information while serving as Secretary of State.

“Again, a high ranking official who should know better, but completely given a pass, and almost an apologetic pass,” Sterling said to the Washington Post about Clinton, implying that regular citizens such as himself are treated differently. While Clinton may escape unfettered after using a personal email account on her own private server for government business, Sterling sits in the Federal Correctional Institution, Englewood. FCI Englewood is the same facility that houses former Illinois Governor Rod Blagojevich and Jared Fogle, former Subway spokesman.

Prosecutors insisted that Sterling’s case was worse than those of Petraeus and Clinton, portraying him as an ex-employee with a grudge. They claimed that he maliciously leaked information to get back at his old employers, and in the process shut down a CIA operation. Sterling did not take the stand at his trial, and neither did Risen.

Sterling’s wife Holly, whom he met in 2004, continues to support her husband’s cause while he appeals the decision against him. She started a petition to convince President Obama to pardon Sterling. Her efforts have garnered over 150,000 signatures, as well as high-profile supporters such as Cornel West and John Kiriakou, another former CIA officer convicted of leaking information. Sterling lauded his wife’s efforts. “Without her,” he said, “I would never be able to endure any of this.”