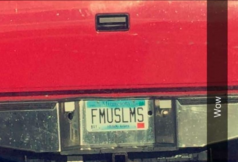 An offensive vanity license plate initially approved in Minnesota is now being revoked by the state’s Department of Public Safety. The license plate, initially spotted on a Chevrolet truck near the city of St. Cloud, reads “FMUSLMS.” Unlike other vanity plates, this one doesn’t leave much to the imagination.

The Department was quick to issue an apology, saying, “This personalized license plate should never have been issued; it is offensive and distasteful.”

I am appalled that this license plate was issued by the State of Minnesota. It is offensive, and the person who requested it should be ashamed. That prejudice has no place in Minnesota. I have instructed the Commissioner of Public Safety to retrieve this plate as soon as possible and re-review agency procedures to ensure it does not occur again.

At the Governor’s direction, the Department is reviewing the process of approving custom vanity plates and will review the oversight of plate applications.

Jaylani Hussein, Executive Director of the Council on American Islamic Relations in Minnesota, also remarked on the oversight:

We are extremely concerned as a community that this type of expression of anti-Muslim (sentiment) is not only existing but we also missed looking at it. In a personalized license plate, there should be much more careful view because of a lot of people who want to create certain types of messages.

The Department of Public Safety, which reviews custom requests for vanity plates, apparently missed the request. The plate was approved in Foley, Minnesota, a small town of about 2,500 people, last June.