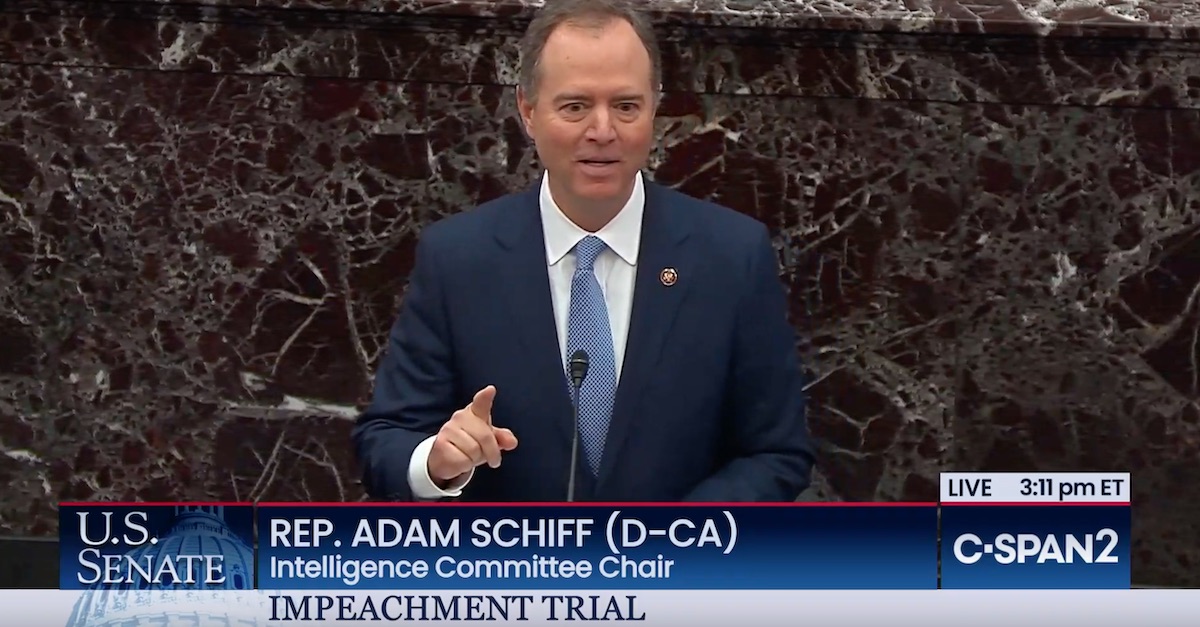 Impeachment Manager and House Intelligence Committee Chairman Rep. Adam Schiff (D-Calif.) on Friday played video of the infamous July 18, 2018 Trump-Putin press conference in Helsinki, during which Trump failed to rebuke Russia on the world stage for  interference in the 2016 election. Schiff did this in an effort to bolster his argument that Trump ought to be removed from office.

The line of thinking goes: Trump withheld military aid from Ukraine while it was under attack by Russia in order to coerce Ukraine to investigate the Bidens and the Kremlin-sponsored debunked CrowdStrike conspiracy theory that Ukraine, not Russia, interfered in the 2016 election. The result? A “propaganda coup” for Russia.

Schiff asserted that the series of events (Russia interferes in 2016, gets President Trump to turn on U.S. intelligence agencies and embrace the theory that it was actually Ukraine that did so etc.) was “one hell of a Russian intelligence coup.” Schiff went so far as to say that the Soviet Union had “no such success” during the Cold War.

“They got the President of the Untied States to cover for their own interference in our election,” he said. “I would submit to you in the entire length of the Cold War, the Soviet Union had no such success–no such success. And why? Because a former Mayor of New York persuaded a president of the United States to sacrifice all of that for a cheap shot at his political opponent. For a smear against his political opponent. Was it worth it? I hope it was worth it for the president.”