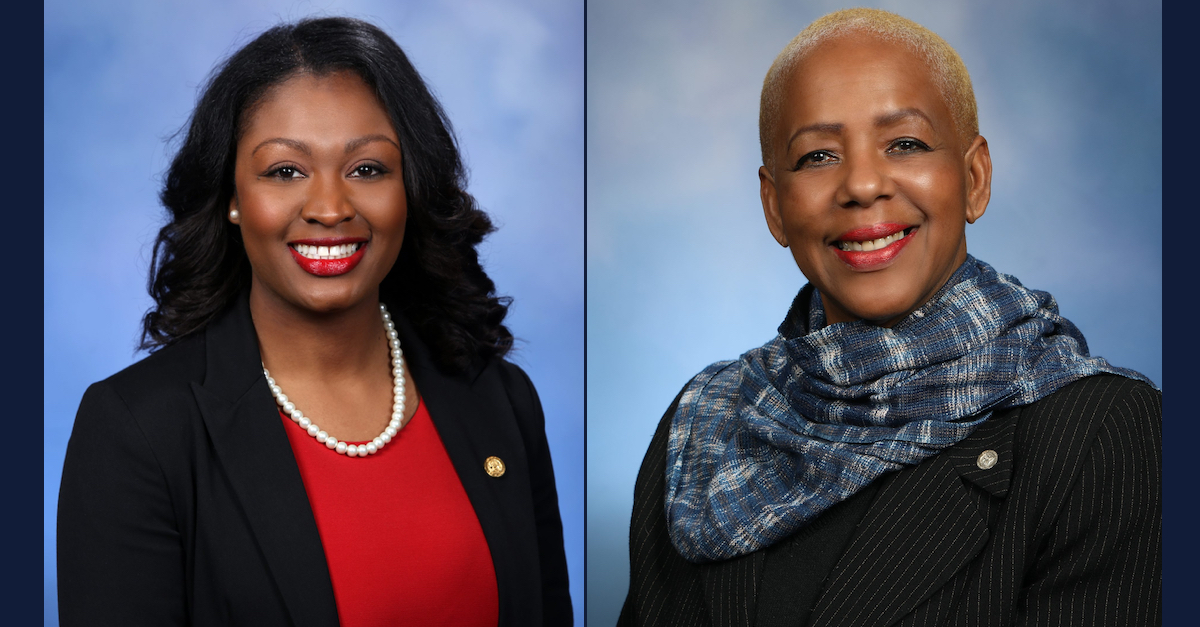 An Ohio woman is facing criminal charges after she allegedly left threatening and racist voicemails for two Michigan state representatives, both Black women.

Bachman faces the following charges: one count of false report or threat of terrorism, a potential 20-year felony; one count of ethnic intimidation, a two-year felony; and two counts of telecommunications services – malicious use, a six-month misdemeanor.

“You Won’t See the Bullet Coming.”

According to Nessel’s office, Bachman left a threatening voicemail for Anthony in May 2021.

“Hay um, need to cancel that bill against the vets, you little traitor,” Bachman allegedly said. “And, um, you won’t see the bullet coming, let me tell you that. So, stop this sh*t and you’re fired. We’ll be coming to Michigan soon to remove you from your post.”

The next month, Bachman allegedly left a threatening voicemail for Johnson that included racial slurs.

“[W]e are going to get you,” Bachman allegedly said after uttering at least two racial slurs for Black people. “You will die. You are one of the worst offenders. We actually have a tier too, in like points for how much you are worth once we kill you…. You’re going to die and I’m happy about it. The whole world will be rejoicing, just know that. Sleep well.”

Bachman also allegedly made a threat in the call against Rep. Maxine Waters, a California Democrat who is also a Black woman, according to the Detroit Free Press.

Michigan State Police investigated the incidents before referring them to the AG’s office for investigation, Nessel’s press release said.

“This rise in threats against elected officials will not be tolerated,” Nessel said in the statement. “Those who think hiding behind a phone or keyboard will prevent them from facing criminal charges are severely mistaken. I appreciate the work done across state lines to bring accountability in this case.”

Anthony, a Democrat serving her second term, was the first African-American woman to serve as state representative for Lansing. She is the chair of the House Democratic Caucus.

“The division in our country, and in Michigan especially, has continued to build and develop over the last few years to a point where it’s getting in the way of our democracy and distracting us from good governance,” Anthony said in a statement to Law&Crime. “We are at a point in time where we just have to tone down the temperature and choose to lead with respect, even if we disagree. There is no room for this type of vitriolic language or hatred in politics, or any public space. I am grateful for Attorney General Nessel and her team for taking these threats seriously and taking swift, decisive action against this type of intimidation.”

Johnson: “The Only Time I Know a Name is if a Charge Is Filed.”

Johnson, also a second-term Democrat, represents part of the city of Detroit. She told Law&Crime that she was aware that Nessel’s office was announcing the charges against Bachman, but that she couldn’t recall exactly what her alleged voicemail said.

“I’ve received well over ten thousand phone calls, emails, death threats, and hate mail, so I don’t know what [Bachman] said,” Johnson told Law&Crime. “The only time I know a name is if a charge is filed.”

“Out of all the thousands, over ten thousand, only two have been charged,” Johnson also said. “Only two.”

The case against Michael Chad Varrone, who allegedly called in a fake bomb threat to the state Capitol and also threatened to kill Johnson, appears to have slowed to a crawl after a promised mental health evaluation of Varrone failed to materialize, much to Johnson’s frustration.

“You’re telling me that a guy made all these threats, threatened to bomb the Capitol, threatened me and my family, and I’m thinking it’s going to be over and done with, only for me to find out he’s walking around?” Johnson said.

Although Johnson said she hopes for a conviction in Bachman’s case, she doubts that will be the end result.

“Would I really actually expect this gov to do anything to really try and help me? No,” Johnson said.

Johnson’s skepticism comes from her feeling that when she previously spoke out against violent threats against her, she was largely abandoned by her colleagues. After an edited version of a December 2020 Facebook Live video in which she cautioned “Trumpers” to “walk lightly” was published on the right-wing social media website Parler, Johnson was stripped of her committee assignments and publicly chided by her House colleagues, both Democrats and Republicans.

“After all that happened,” she said of the backlash over the video, “I just felt like a person out in the middle of the ocean, all by myself. But still I rise.”

The allegations against Bachman recall other threats of violence against Democratic women serving the state of Michigan, including a failed alleged plot to kidnap Gov. Gretchen Whitmer (D).

Bachman is scheduled to appear for an arraignment on March 31.