‘You Do Not Deserve to Be Here’: Florida Man ID’d as DHS Employee Accosts Black Teen and Friends in Gated Community 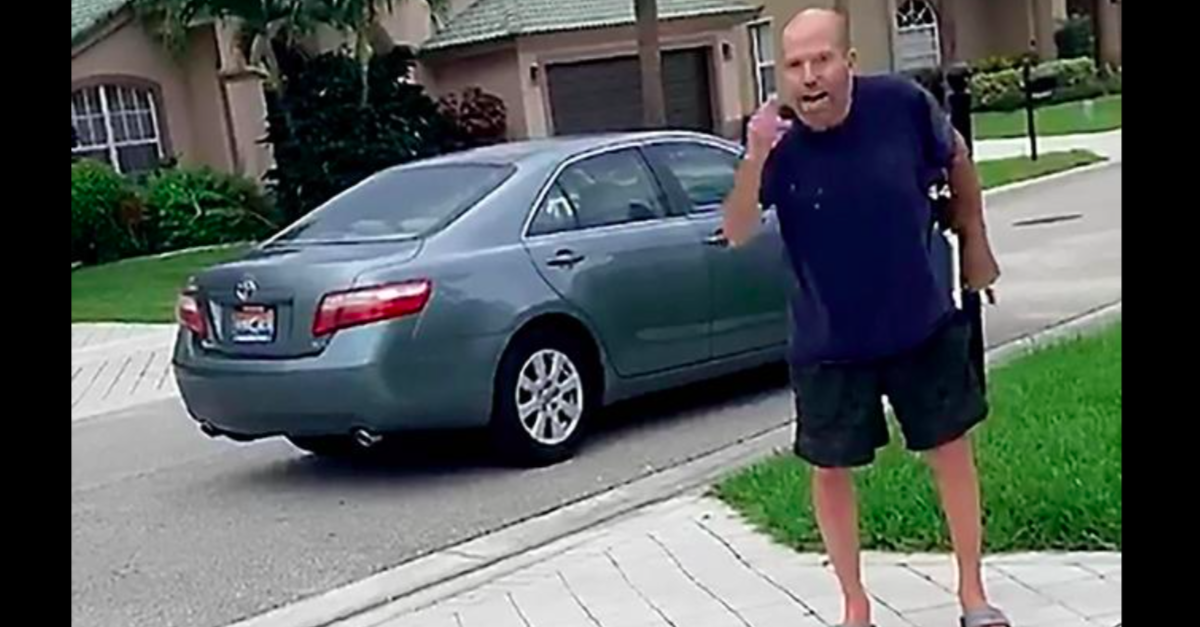 In the latest viral video of its kind, a 60-year-old white man in South Florida was filmed telling a group of teenagers, one of whom was black, that they didn’t belong in the neighborhood.

The video, which was filmed by one of the teens, showed the man confronting the group and telling them they “don’t belong in this development” before threatening to have the police arrest them. He has since been identified by the Sun-Sentinel as Lee Jeffers.

The target of the man’s rage appeared to be 15-year-old Breonna Nelson-Hicks, the only one of the teens who was black, the Palm Beach Post reported Thursday. The newspaper later identified Jeffers as an analyst who works with the U.S. Citizenship and Immigration Services, which is an agency within the Department of Homeland Security (DHS).

RETWEET until this man is identified!

He harassed a group of black teens in a gated community in the affluent Village of Wellington, here in my county.

According to him, "they didn't belong in this development."

According to the teens, he threatened to hit them w/ his car. pic.twitter.com/ALynLUvS9E

According to the report, Nelson-Hicks and her friends were driving a golf cart on Sunday afternoon in her Wellington, Florida neighborhood when a man began following them in his car. After the teens stopped at the guard booth of the gated community and began driving to Breonna’s home, the man began tailgating the golf cart, causing the teens to stop and walk the remainder of the way.

As Nelson-Hicks and two female companions approached her home, the man identified as Jeffers got out of his car and began yelling at them, leading one of the teens to start filming the encounter.

“Take my picture, I really don’t care, because you do not belong in this development,” he says once the video starts rolling.

“I’m not telling you,” all of the girls replied, with Breonna adding, “I live here.”

“OK, where do you live?” Jeffers asked.

“Why would we tell you any of this?” one of the girls said, while another says, “I’m not telling you.”

“OK, Not a problem. I’m going to call the gate and have you all arrested,” the man said, before reportedly pointing at Breonna and saying, “You do not deserve to be in here.”

“OK,” one of the girls replied. “What did we even do wrong?”

The man turned to the woman who lives across the street from the Nelsons. Hearing the commotion, she had come outside and stood at the foot of her driveway.

That’s when one of the teens pointed out that he was “coming at 15-year-olds” and alleging that he threatened to hit them with his car.

“Because you’re 15 years old?” the man asked rhetorically, adding, “You could marry in Mississippi or Alabama.”

At that point Nelson-Hicks’s grandfather comes out and the video ends. The grandfather has since been identified as Tony Nelson. He told the Sun-Sentinel that Jeffers reached to apologize after the video started going viral on social media.

“I initially told him the damage was done and I could not accept it,” Nelson said. Jeffers reportedly offered personal details about himself in an attempt to explain his behavior, Nelson said.

“Am I going to be forgiving him? I can’t say that,” Nelson said. “I would be lying.”

“I don’t want people to think they can get away with this kind of behavior if they come back later and say they’re sorry. He’s got to prove himself to the community first,” he added.

Palm Beach Sheriff’s Office spokeswoman Teri Barbera on Wednesday emailed the Palm Beach Post saying the man claimed he had “almost hit the golf cart being driven by” the teens.

“We received two calls and when the deputies arrived, the male had already gone home,” Barbera wrote in the email. “Deputies did speak to the juveniles and made contact with the male next day. Based on both accounts no crime was committed.”

The U.S. Citizenship and Immigration Service said that it was looking into “this individual’s off-duty behavior.”

“USCIS holds its employees to the highest standards of integrity and professionalism regardless if they are on or off-duty,” the federal agency said in a pair of tweets.  “We are looking into the matter that has been reported in the press about this individual’s off-duty behavior.  The video is certainly disturbing, and we are working to get all available information in considering what action, if any, may be appropriate for the agency to take.”

USCIS holds its employees to the highest standards of integrity and professionalism regardless if they are on or off-duty. We are looking into the matter that has been reported in the press about this individual’s off-duty behavior.

The video is certainly disturbing, and we are working to get all available information in considering what action, if any, may be appropriate for the agency to take.