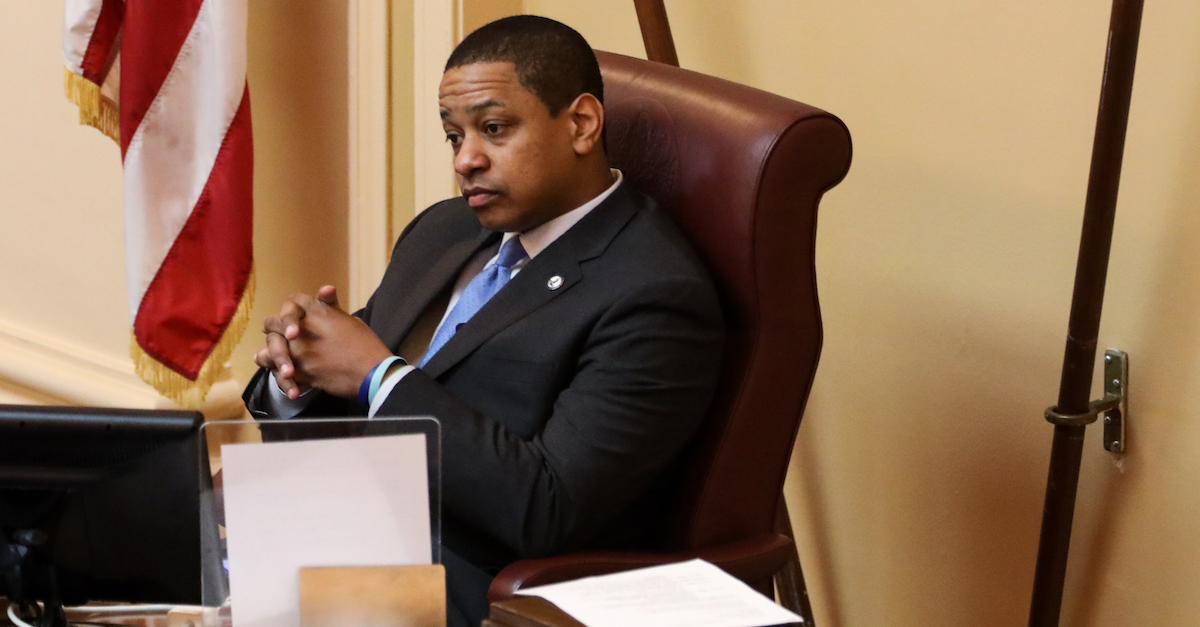 A day after it was reported that Vanessa Tyson, the woman accusing Virginia’s Lt. Gov. Justin Fairfax (D) of sexual assault, had hired the law firm that represented Brett Kavanaugh accuser Dr. Christine Blasey Ford, Tyson has released the “only statement” she and her legal team will be making.

Through the Washington, D.C.-area firm Katz, Marshall and Banks, Tyson released the statement Wednesday afternoon. In it, Tyson explained why she decided to come forward.

“On the night of Friday, February 1, 2019, I read multiple news accounts indicating that Virginia Lt. Governor Justin Fairfax would likely be elevated to Governor as an immediate result of a scandal involving Governor Ralph Northam,” she said. “This news flooded me with painful memories, bringing back feelings of grief, shame, and anger that stemmed from an incident with Mr. Fairfax that occurred in July 2004 during the Democratic National Convention in Boston.”

Tyson said that what were initially “cordial, but not flirtatious” encounters turned into her going up to Fairfax’s hotel room. She said she “had no reason to feel threatened” at that time, given the nature of their interactions. Tyson said that quickly changed.

“I stood in the entry way of the room and after he located the documents, he walked over and kissed me,” she said. “Although surprised by his advance, it was not unwelcome and I kissed him back. He then took my hand and pulled me towards the bed. I was fully clothed in a pants suit and had no intention of taking my clothes off or engaging in sexual activity.”

“What began as consensual kissing quickly turned into a sexual assault,” she said, accusing Fairfax of forcibly pushing her head “towards his crotch” and forcing his penis into her mouth. Tyson claimed that she “cried and gagged” as Fairfax forced her to perform oral sex

“To be very clear, I did not want to engage in oral sex with Mr. Fairfax and I never gave any form of consent. Quite the opposite,” she said. “I consciously avoided Mr. Fairfax for the remainder of the Convention and I never spoke to him again.”

Tyson said that she was humiliated and ashamed by the alleged assault and did not speak about it for years. Eventually, Tyson would learn a PhD from the University of Chicago and is now a tenured professor at Scripps College, she said. Tyson said that she saw an article published by The Root in Oct. 2017, which was a month before Fairfax won the lieutenant governor race.

She said that seeing his picture in the news “hit me like a ton of bricks, triggering buried traumatic memories and the feelings of humiliation I’d felt so intensely back in 2004.” Tyson cited the #MeToo movement as a motivating factor in coming forward with her story, but expressed her disappointment that the Washington Post decided not to run a story about her allegations.

“By December 2017, I not only told many friends that Mr. Fairfax had sexually assaulted me but I also reached out to a personal friend at The Washington Post and spoke to his colleague about the assault,” she said. “After The Washington Post decided in March 2018 not to run my story, I felt powerless, frustrated, and completely drained.”

Now, we return to the present day.

Fairfax, who would be the next person up if Northam were to resign over a controversy of his own, has denied that he sexually assaulted Tyson. He did admit, however, that they had sexual contact.

Just as with the Northam story, the conservative and pro-Trump website Big League Politics was first to the Fairfax allegation, and identified Tyson by name. There were photos of Tyson and a screenshot of a text she sent a friend.

Tyson referenced this screenshot in her Wednesday statement.

“On Friday, February 1, 2019, as stories appeared in the media suggesting that Governor Northam would have to resign and that Mr. Fairfax would be sworn in as Governor, I felt a jarring sense of both outrage and despair,” she said. “That night I vented my frustration on Facebook in a message that I wrote as a private post. I did not identify Lt. Governor Fairfax by name but stated that it seemed inevitable that the campaign staffer who assaulted me during the Democratic Convention in 2004 was about to get a big promotion. It was not my intention in that moment to inject myself into what has become a much larger political battle.”

Tyson said that she was reluctant to answer press inquiries because she knew she would “immediately face accusations about my motives and be branded a liar, as is routinely the case when women come forward with allegations of sexual misconduct against prominent men.” But then Fairfax asserted that the Washington Post found Tyson’s allegations to have “significant red flags an inconsistencies.” The Washington Post disputed that and Tyson was enraged by Fairfax’s response.

“Mr. Fairfax’s suggestion that The Washington Post found me not to be credible was deceitful, offensive, and profoundly upsetting. He has continued a smear campaign by pointing reporters to a 2007 educational video in which I talked about being the victim of incest and molestation,” she said. “In that video I did not talk about being assaulted by Mr. Fairfax. This, of course, is not proof that he did not assault me. His reliance on this video to say the opposite is despicable and an offense to sexual assault survivors everywhere.”

Tyson said that she has no political motive to take down Fairfax with a false accusation, as she is a “proud Democrat.”

“Given his false assertions, I’m compelled to make clear what happened. I very much wish to resume my life as an academic and professor. I do not want to get further embroiled in this highly charged political environment,” Tyson said. “This is the only statement I and my legal team will be making.”