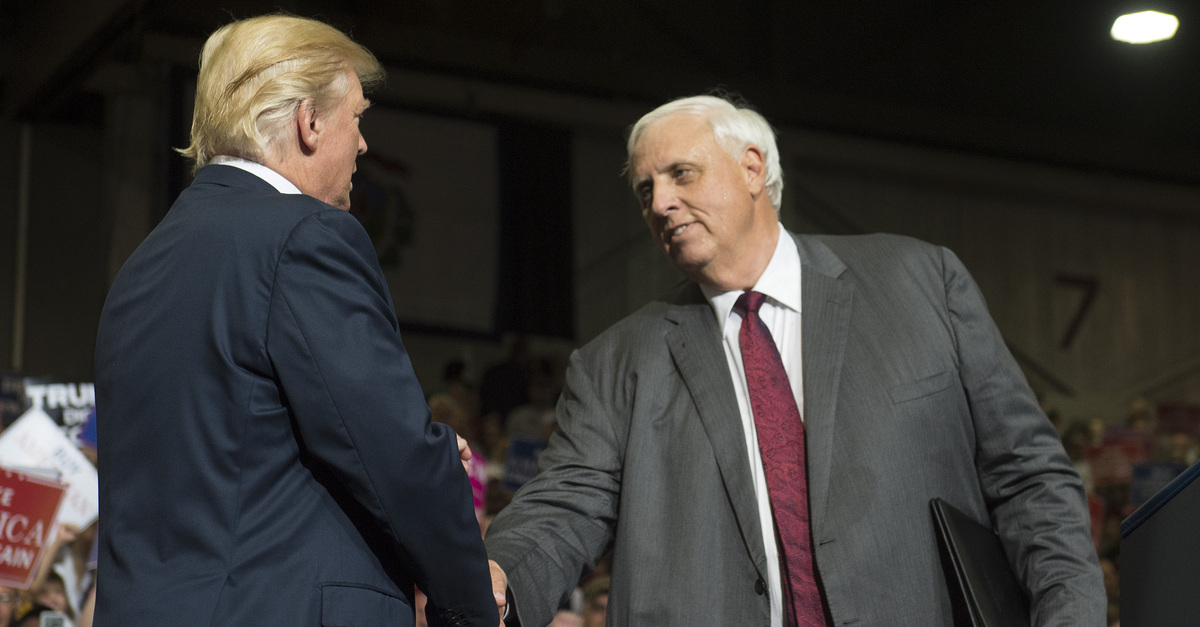 President Donald Trump got Appalachian omelette on his face late Tuesday as the 50th state in the nation finally notched its very first case of the novel Coronavirus (COVID-19).

We have all of this equipment in stock and we’re looking at different sites and a few different locations.

We’re not gonna need them in West Virginia where, so far, I guess they have none–still none? still none–West Virginia; Big Jim, the governor, he must be doing a good job.

That’s what’s reported. … West Virginia is the only one that has no cases. So obviously that’s being treated differently than a New York or California.

“None of us have ever gone through a pandemic,” the governor said during a televised address–noting that the infected individual was from the state’s easternmost leg–right near Washington, D.C.

“But this is real,” he continued. “And it’s really concerning.”

Justice, currently a Republican, is a staunch ally of Trump’s—and formerly a Democrat who switched parties at a surprise campaign rally with Trump just a few months after taking office in 2017.

The governor of the largely rural state, for his part, had previously been a bit less optimistic about West Virginia’s status.

“We know it’s here,” he said over the weekend at a press conference. “I mean, let’s be real. It has to be here. We just haven’t found it yet.”

Many have speculated as to why West Virginia was the last state to report a confirmed case of the Coronavirus.

“We [in West Virginia] are at a relatively low risk,” West Virginia Department of Health and Human Resources Secretary Bill Crouch said on Friday. “We don’t have a lot of international travel, and that reduces our risk. We are going to see [COVID-19], here eventually, we know that, and our goal now is to be prepared.”

On Monday, The American Prospect‘s David Dayen offered an elegiac interpretation of West Virginia’s late-coming to the current pandemic.

“That West Virginia doesn’t yet have a confirmed coronavirus case is actually kind of tragic, because it speaks to the isolation of an entire state, cut off from the economic system and abandoned,” he noted via Twitter–later chastising those “seek[ing] to misinterpret.”

Others noted West Virginia’s almost absolute lack of testing–on Monday only 84 people out of nearly two million residents had been tested; effectively zero in statistical terms–itself perhaps an indictment of the state’s health care infrastructure in general.

But with the contagion already making its way through the Blue Ridge Mountains and the Shenandoah River Valley, Justice refrained from blame in his speech.

“I said I was going to give you a pathway,” he said. “And I’m going to ask you something really, really special. Tonight, you’ve got to join me. We’re all in this boat together. We have to do this. The pathway to absolutely the prevention of this disease spreading—and this is a once in all of our lifetimes event that is happening here, a pandemic.”

The governor continued with rhetoric keyed toward the moment:

“We’ve got to be really smart,” Justice urged. “We have to use our power. Our power that we feel like is inconveniencing us and hurting us, is our power to destroy this terrible disease.”