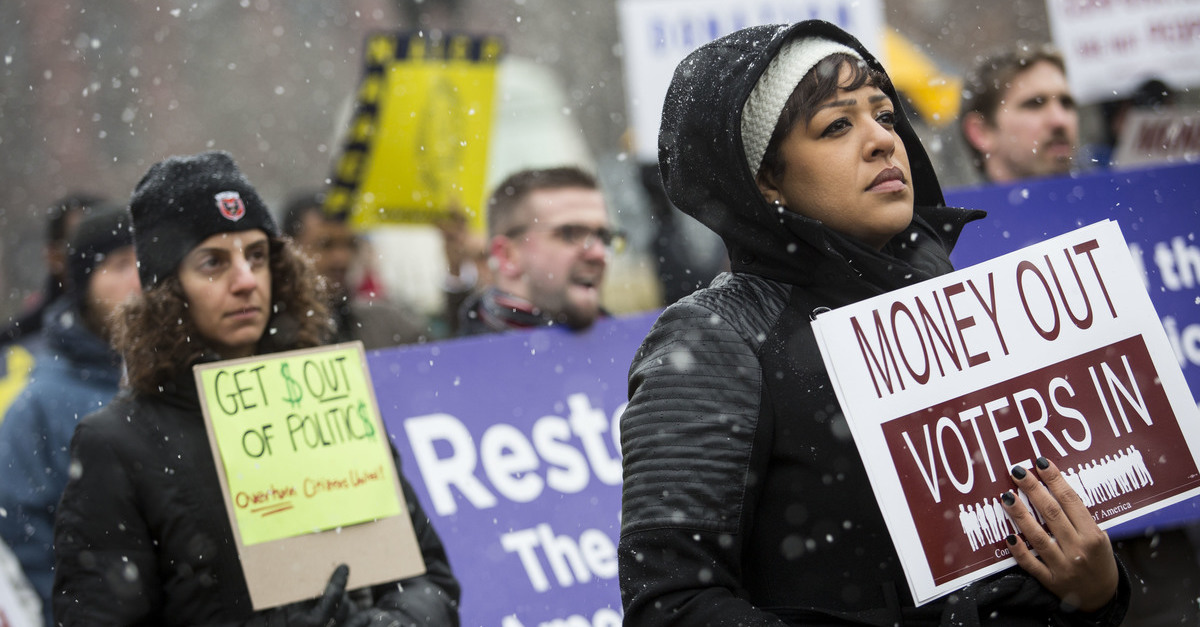 A non-profit advocacy organization dedicated to overturning the controversial Citizens United decision launched a college-based campaign to do exactly that earlier this week.

American Promise kicked off “The Cause of Our Time” at the third annual National Citizen Leadership Conference–the largest national event dedicated to the passage of a 28th Amendment keyed toward revoking the exceedingly unpopular Supreme Court precedent.

The advocacy group describes their campaign as an effort to “educate and engage young people on college campuses and beyond in how to become leaders calling for democracy reform through a constitutional amendment to get money out of politics.”

“The unchecked political spending by corporations enabled by the Citizens United decision has stolen citizen’s power to govern our own democracy,” said Devin Hiett, an international studies and journalism senior at the University of Oklahoma. “I often hear my peers say they don’t see the point of engaging in the political system because they don’t feel they have the power or ability to make a difference because they lack financial capitol, which I find to be a gross miscarriage of justice. America was founded on the notion that ‘we the people’ not ‘we the corporations’ govern our democracy and classifying political spending by corporations as ‘free speech’ is disingenuous and threatens the very core of the democratic system.”

In 2010, the U.S. Supreme Court handed down Citizens United v. F.E.C., a landmark ruling that deleted several key provisions of the Bipartisan Campaign Reform Act of 2002, typically known as McCain-Feingold.

In that voluminous and harshly argued 5-4 decision, the high court’s conservative majority held: (1) the government cannot restrict the speech of state-created entities like corporations and non-profits or state-sanctioned entities such as unions; (2) that spending money is a form of free speech; and therefore (3) the government cannot limit spending in the political arena by such organizations.

Since that decision was handed down, outside expenditure groups have injected nearly two billion dollars worth of corporate largesse into American politics. And, nearly half of that overall total has come via undisclosed and effectively untraceable so-called “dark money.”

University of Missouri-Kansas City political science major Isabelle Pekarsky said she hoped the current Citizens United regime was not long for this earth–and that she would work to overturn it.

“Although I love my major, it is clear we need a fundamental change in our system to restore our democracy to what it should be,” Pekarsky said in an email.” As a student learning politics and government, it is obvious the problematic role big money plays in hindering our democratic process. I look forward to graduating and entering the political workforce to a government with a 28th amendment and true representation of individual citizens.”

Young Americans have always stepped up in our national hour of need. Alexander Hamilton and Betsy Ross were in their early 20s during the American Revolution. Frederick Douglass was 23 years old when he took the stage at the Massachusetts Anti-Slavery Society. Alice Paul through her 20s led the fight for the 19th Amendment and women’s voting rights. And millions of young Americans successfully demanded the right to vote with the 26th Amendment. Now once again, a new generation of Americans is rising to redeem the American promise, combat corruption and secure equal rights. We will be there with them every step of the way.

“The campaign is being taken on by attendees and asks young Americans to sign on to a statement of principle demanding an amendment, to be delivered to their representatives at next year’s Citizen Lobby Day,” a press release issued by the advocacy group noted. “Campus chapters are being organized across the US with the goal of 20 by the November 2020 election.”

Law&Crime previously reported on efforts by American Promise to amend the U.S. Constitution in order to replace the ruling in Citizens United with language that allows for stringent campaign finance reform and dismisses the controversial notion that corporations are people entitled to the protections offered by the Bill of Rights.