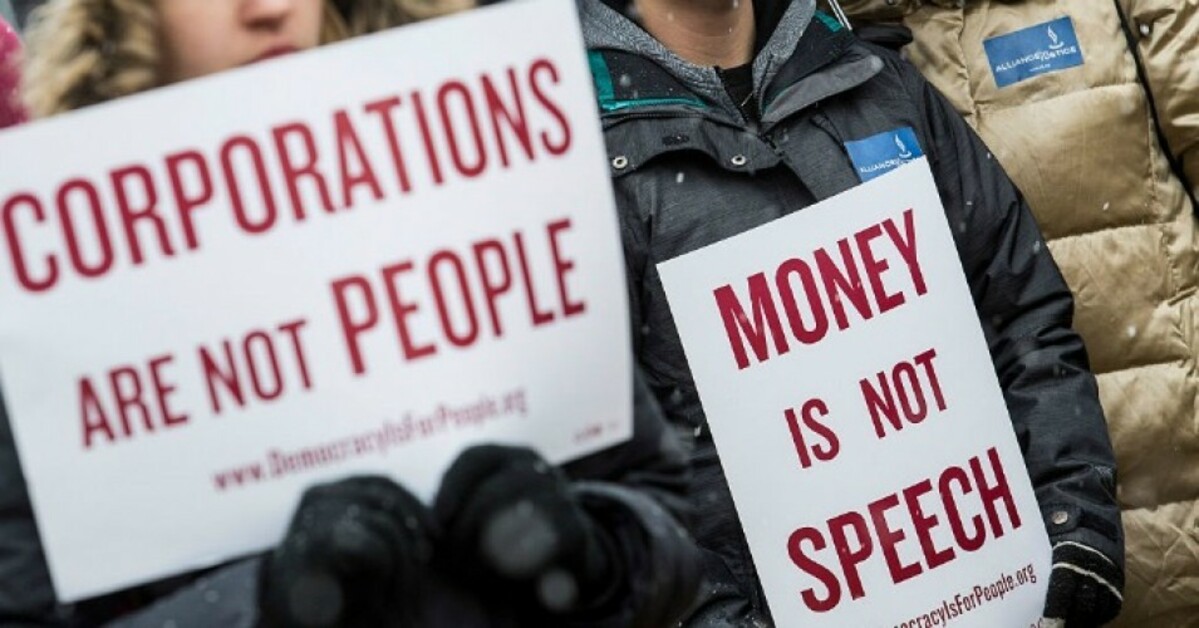 In 2010, the U.S. Supreme Court handed down Citizens United v. F.E.C., a ruling that struck down several provisions of the Bipartisan Campaign Reform Act of 2002, typically known as McCain-Feingold.

Using a somewhat controversial First Amendment analysis, the high court’s conservative majority held: (1) the government cannot restrict the speech of state-created entities like corporations and non-profits or state-sanctioned entities such as unions; (2) that spending money is a form of free speech; and therefore (3) the government cannot limit spending in the political arena by such organizations.

The fallout from Citizens United, over the course of the past nine years, has unleashed roughly two billions dollars worth of outside corporate spending into the American political system. And, since the court revoked the centerpiece provisions of McCain-Feingold along ideological lines in 2010, nearly half of that total spending has come in the form of undisclosed and untraceable so-called “dark money.”

Against this backdrop of torrential cash, 50 legal luminaries have signed onto the open letter prepared for release on Constitution Day by a cross-partisan national organization that’s leading the current drive for a 28th Amendment to the U.S. Constitution. The list of names signing this letter was exclusively obtained by Law&Crime.

Jeff Clements is the president of American Promise, the non-profit dedicated to overturning the ruling in Citizens United.

“The Supreme Court has really made a mess of the First Amendment with the theory that money–unlimited money–is an expression of free speech,” Clements said. “What this amendment would do is put us back on a strong foundation of free speech for all Americans. Not just those with unlimited wealth.”

Clements also pushed back against arguments that claim corporations are entitled to First Amendment protections:

We are advocates of free speech and the First Amendment. The free speech argument is actually on our side. Most Americans have less free speech now–when money dominates the system. When money is the dominant currency of who can run for office and what candidates are taken seriously–and when the money is coming from fewer and fewer sources–we have fewer voices. Most Americans cannot participate.

“We urgently need a constitutional amendment to enable us to have reasonable rules as to how money is used in our political system,” he said. “If you care about free speech and the marketplace of ideas then you care about passing this Constitutional Amendment.”

The open letter strikes many of the same chords.

“As attorneys, law professors, and former judges with a wide variety of political beliefs and affiliations, we are convinced that our nation’s current election spending framework is a root cause of dysfunction in our political system and requires fundamental reform,” the letter begins. All citizens should have “the right to participate meaningfully in the political process” and should be able to “trust that their ideas have a fair chance of being heard by their representatives.”

The document also strikes out against political cynicism by arguing for a political system unlike anything Americans currently experience.

“[O]fficeholders should be responsive to the people they serve,” the letter says.

Clements pointed how the process of amending the Constitution is, and always has been, part-and-parcel how America works:

What we’re trying to show is that the Constitution wasn’t finished 232 years ago. Many of the biggest pieces of the Constitution–the Bill of Rights, women being able to vote, directly electing senators–the people did that through our Constitutional Amendment process. And we need to do it again.

The bill for a 28th Amendment to overturn Citizens United has been introduced in Congress by House sponsors Rep. Ted Deutch (D-FL) and Rep. John Katko (R-NY) and in the Senate by Sen. Tom Udall (D-NM) and has since been co-sponsored by every member of the Senate Democratic Caucus–including independent Senators Bernie Sanders (I-VT) and Angus King (I-Maine)–there are currently no Republican Senate Caucus co-sponsors of the effort.

Editor’s note: this post has been amended post-publication for clarity and accuracy.