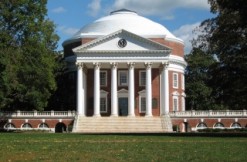 “A Rape on Campus,” Sabrina Erdely’s 2014 article for Rolling Stone, was, inherently, highly charged. An exploration of rape culture through the lens of a gang rape allegation at the University of Virginia fraternity, it became even more divisive when it turned out that there were serious credibility issues with the accuser, “Jackie,” leading to a retraction of the piece. As we’ve covered in the past, this all led to Nicole Eramo, an associate dean of students and member of UVA’s Sexual Misconduct Board who was a major part of the article, filing a federal defamation lawsuit against Rolling Stone and Erdely.

This past Friday, July 1st, well over 1,000 pages of new documentation was filed by both sides, and it’s fascinating, albeit a lot to sort through. Over the weekend, the Washington Post covered some of the revelations from Erdely’s 400+ pages of notes as well as those from the 86 page declaration she filed Friday, but there’s a lot more where that came from.

One exhibit of note attached to Erdely’s declaration collected 27 pages of text messages between Erdely and Alex Pinkleton, a rape survivor turned activist who had become a close friend of “Jackie,” the accuser who was central to “A Rape on Campus.” At one point, the dialogue, which covered a little under three weeks of texting, turns to whether they’re naming one of the men that Jackie was accusing (redaction is from the original public court filing): 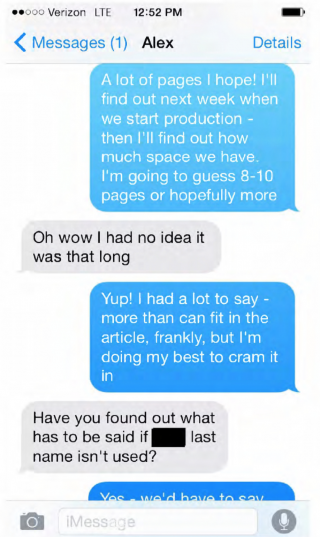 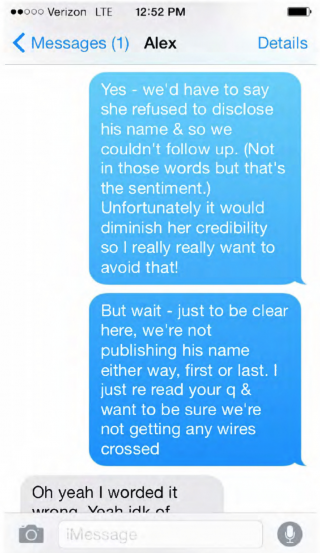 Pinkleton asks “Have you found out what has to be said if [REDACTED]’s last name isn’t used?” Erdely then replies “Yes – we’d have to say she refused to disclose his name & so we couldn’t follow up. (Not in those words but that’s the sentiment.) Unfortunately it would diminish her credibility so I really really want to avoid that!” While it’s not unusual at all to futz with certain things (like cleaning up quotes) to present the subject of an article in a flattering light, this exchange does show Erdely’s awareness of Jackie’s potential credibility issues, which could certainly be seen as problematic.

In her declaration, Erdely addressed the topic of the man in question by writing that “[I] believed that I had hit a wall in my attempts to find out [REDACTED]’s name. As I explain above, I had tried without success to find him on my own, and Jackie was adamantly refusing to provide his name. Because Alex and Sara [Surface, a fellow campus activist who was also friends with Jackie] were also fighting me on getting his name, I understood that the friends had closed ranks.” In a parenthetical, Erdely then adds that “After publication, I learned that my understanding was correct—Jackie had apparently reached out to friends, including Rachel Soltis, instructing them not to give me [REDACTED]’s name and saying I was on a ‘witch hunt.'”

As for Eramo, she filed a motion for summary judgment in Friday’s deluge of pleadings. At least in part, she’s arguing that she’s not a public figure, which would mean that she would not have to prove that the defense knowingly spread falsehoods.